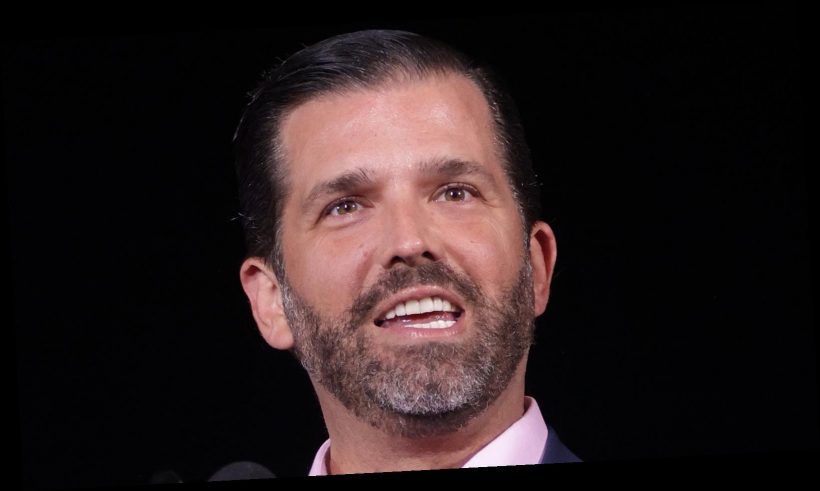 Back in the day — it seems so long ago – Donald Trump Jr. sat as a judge in the boardroom of The Apprentice, helping to grill contestants and backing up his dad’s decisions on whom to “fire” from the competition. Once estranged from his father, the oldest Trump son found his way back into the family’s good graces. Since then, he has become one of the former president’s staunchest supporters, becoming a valuable ally in his father’s bid for re-election (via Business Insider). Even after November, Don Jr. sided with his father in refusing to concede the election results, even as his stepmother Melania and brother-in-law Jared Kushner urged Don Sr. to accept the loss (per CNN).

The former president was barred from major social media accounts like Twitter for repeatedly posting unproven accusations about the election. Don Jr., however, is still very active on Twitter and Instagram, frequently reposting others’ pro-conservative remarks. Don Jr. also shares his father’s fondness for mockery: His feeds often include memes poking fun at such targets as Nancy Pelosi, Alexandria Ocasio-Cortez, Taylor Swift, and trans women. People are used to his style by now — soapboxing about free speech and lamenting all the reversals President Biden has made to his father’s policies. But one of the former first son’s recent tweets still managed to stand out among the rest.

President Biden spent Presidents’ Day weekend with his family at Camp David, the traditional presidential retreat, where he was seen playing an arcade game with his granddaughter Naomi (via The Hill). Attempting to compare the media coverage of Biden’s weekend with the criticism his father got for his many golf trips, Donald Trump Jr. posted a tweet to his already busy feed: “Joe Biden is playing Mario Kart while Americans are dying… am I doing this right?”

Rather than applause, the former first son got rapid pushback from commenters. Most saw no similarity between Biden’s first holiday weekend as president and Trump’s four-year-history of golf outings (per Business Insider, the former president went golfing 25 times between March and September 2020). One tweeter quoted Trump’s repeated assurances early in the pandemic that the virus would simply “go away” on its own. Another response referenced the attack on the Capitol: “What was your dad doing when his supporters were torturing and killing cops?” Others pointed out that unlike Trump’s trips to Mar-a-Lago, visits to Camp David cost taxpayers much less.

One tweet pointed out: “[Biden’s] not rage-tweeting 24/7, threatening election officials or inciting riots. He’s not golfing every weekend. […] Biden has been laser-focused on COVID. He’s entitled to a few hours to play with his grandkids.”