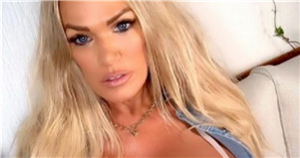 The “world’s hottest gran” revealed a throwback picture from her teenage years.

Gina Stewart, from the Gold Coast of Australia, shared the “unreleased” snap exclusively with the Daily Star.

The photo, taken when the Miss Maxim model was just 19-years-old, shows she’s been comfortable in front of the camera for decades.

Gina stares confidently towards the lens and showcases her chiselled cheekbones, natural beauty and wild perm.

She wore an off-the-shoulder dress, kept accessories to a minimum and donned barely any makeup.

Not much has changed now the influencer is 51-years-old and is still being booked for glamorous photoshoots – but she has ditched the ‘80s hairdo in favour of a bouncy blonde blow-dry instead! Gina recently celebrated her 51st birthday by heading to Queensland for a beach holiday.

“I can either cry about it, laugh about it or embrace it. I’m still deciding.

“After all, age is relative. So I will embrace gratitude.

“I was going to shoot in my birthday suit but thought a bikini was the next best thing."

Gina posted bikini snaps from the occasion – and fans couldn’t believe how young she looks.

One commenter gushed: “You look amazing for 51.”

So how does Gina maintain her youthful looks?

Apparently, she swears by drinking green tea to keep herself feeling young.

She revealed: “(It’s) one of my favourite and one of the cheapest ways to stay healthy.”

The influencer also told the Daily Star that she sticks to a strict skincare regime.

She said: “I believe the Roseship oil I use daily is anti ageing so that’s Botox in a bottle for me. My secret weapon!”

The affordable product is believed to be good for moisturising, brightening and repairing the skin.

And it’s likely the gran’s healthy diet contributes towards her healthy appearance too.

The mum-of-four also incorporates plenty of veg and healthy carbs into her diet.

Salad, broccoli and sweet potatoes are some of her favourites.

The Instagram star added that swerving booze and coffee was an “essential” part of looking after herself.

While she sticks to a pretty strict regime, she doesn’t rule out treats completely.

She admitted: “I do love chocolate so I don’t deny this but only in moderation.”