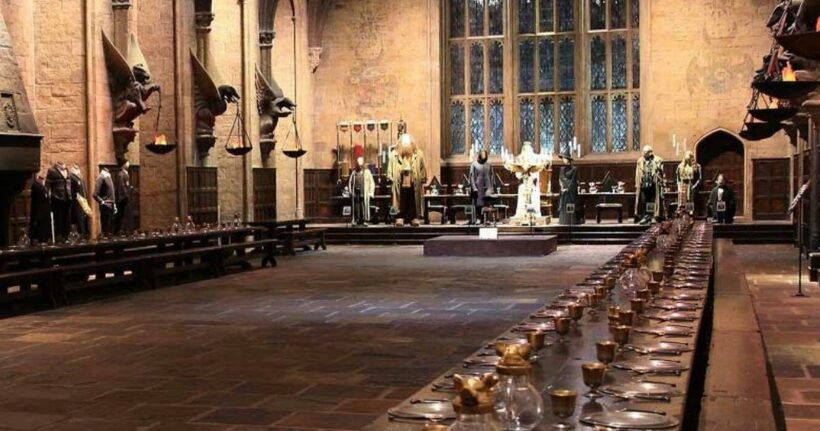 Disappointed people called the annual event’s pricing “a joke” and complained it is “only for wealthy fans”.

Warner Bros Studio Tours puts on the festive spread every year so movie lovers can dine like Harry, Ron and Hermione in the iconic hall from the films.

Visitors to the studio dinner can step into the scenes of the much-loved franchise and live as though their favourite moments are real life.

But those wanting to live out their wizard dreams have to pay film production company Warner Bros – worth £22.8billion – £260 each.

The event will take place at Warner Bros Studio Tour London across three nights from December 13 to 15 and 200 tickets are available per night, for over-18s only.

One fan, Tori Jones, said: “Would be amazing but £500 for two people means it’s only for the wealthy Harry Potter fans!”

Stephanie Hefferman added: “Shame it costs so much! £500 is a joke.”

Barry Hudson remarked: “£520 for two to go for a meal in the present situation, I think not.”

Despite the controversial pricing, all three nights of the two-course dinner event this year have already sold out.

Guests will be served pressed ham hock and pea terrine with lettuce and bread or a beetroot, pomegranate and feta quinoa as their starter.

The two mains on offer are a festive turkey roast or butternut squash and lentil wellington.

The £260 price tag also includes welcome drinks and canapés, after-hours access to the studio tour and a character wand from the gift shop.

Visitors are also treated to a selection of dessert bowls, butterbeer and a photo in front of the green screen.

A description of the night reads: “Dine as the students of Hogwarts did, as our popular Dinner in the Great Hall events returns for another magical year.

“Each night, you are invited for a drinks reception under the imposing Dragon in the Studio Tour’s lobby before moving through to the magnificent Great Hall for a mouth-watering two-course seated dinner.

“You will have the chance to explore the depths of the Studio Tour, exclusively after hours, marvelling at the original sets whilst enjoying dessert bowl food and the wizard’s drink of choice, Butterbeer!

Want all the biggest Lifestyle news straight to your inbox? Sign up for our free Daily Star Hot Topics newsletter

“To top the night off, you can dance the night away with a disco by the Hogwarts Express on Platform 9 before heading to the Studio Tour shop to select a wand of your choice to take home.”

The Harry Potter attraction – which is based in Leavesden, Herts – usually charges up to £250 for a ‘deluxe’ tour around the studio.

A cheaper option is the unguided tour which costs £51.50 a pop.

Warner Bros Studio Tour London has been approached for comment.