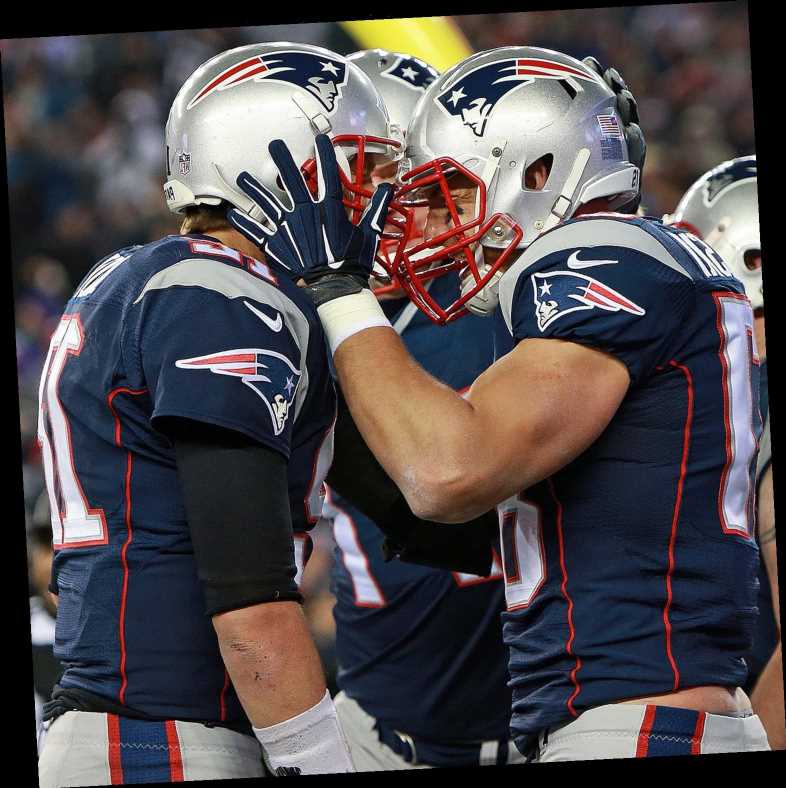 The now-legendary duo joined forces when Rob Gronkowski (affectionately known as Gronk) began playing for the New England Patriots in 2010. By that time, Tom Brady had become synonymous with the team, having played with them since 2000.

Friends On and Off the Field The pair would go on to lead the Patriots to three Super Bowl victories.

In 2018, Gronk told reporters that the pair’s chemistry on the field is due to their friendship off of it.

“I would say basically the friendships are developed over football too. Over studying football together, getting together in the offseason, extra stuff during the season and you just want to build that up so you can be on the same page and be the best chemistry possible that you can be,” Gronkowski shared.

Brady said of the tight end in return, “I love the guy. He has had a big impact on my career personally, professionally … I am very lucky to play with him and we’re going to keep fighting. We are going to keep going after it week in and week out. We’re going to figure out a way to get this thing turned around.” Gronk told reporters that what he admires most about his teammate is “just the way he prepares. His work ethic, the way he’s just still going at his age. Just still has a competitiveness to him every single time he steps out on the field. It’s obviously an honor to be next to a quarterback like that in the huddle and it’s really basically how he brings it every single day, no matter what kind of day it is.” The dynamic duo attended the Kentucky Derby in May 2015. Gronk told ESPN reporter Jenna Laine in January 2021 that their time at the Derby included one of his favorite memories of Brady.

He shared of the famously healthy QB, “Seeing him take a shot. Just seeing his face after, like disgust, like, ‘I’m putting this alcohol in my body.’ “ Gronk goes in for a hug after scoring a touchdown against the New York Jets in October 2015. The pair celebrated their Super Bowl LI win in Boston, Massachusetts, in February 2017. Brady tackled Gronk on the field of Fenway Park in Boston after Gronk stole his jersey and made a run for it. The teammates were there for Opening Day 2017 for the Boston Red Sox, where Brady threw out the first pitch.

Another Day, Another Super Bowl Appearance The pair celebrated a touchdown against the Philadelphia Eagles at Super Bowl LII. In December 2018, Brady looked over Gronk after he got injured during a game against the Miami Dolphins. The pair celebrated after their win over the Los Angeles Rams in Super Bowl LIII in February 2019.

Back at It Again

In March 2020, Brady shocked fans by leaving the Patriots after a two-decade-long run with the team. He settled on the Tampa Bay Buccaneers.

Gronkowski, who had retired from football just a year earlier, announced that he, too would be joining the Florida team alongside the QB. Gronk insisted that, though playing with Brady again was definitely a draw to joining the Buccaneers, the dynamic duo hadn’t planned on playing together again.

“It kind of just happened. With my retirement and him hitting free agency, it just kind of lined up like that,” Gronk said, according to The Tampa Bay Times.

Brady posted a video of the pair celebrating after the Buccaneers won against the Green Bay Packers in the 2021 NFC Championship.

For these two, it really is all fun and games.

How does that saying go again? Buddies who laugh together, win four Super Bowls together!

Imitation Is the Greatest Form of Flattery

Brady showed off his Gronk impression— which is pretty spot on if you ask us — and said of his pal after telling a story, “It’s just him being Rob, and that’s why everyone loves him.”

The pair proved they really do know a lot about each other when they took a friendship test. Gronk joked at one point, “You just know me so well, it’s like you come to work with me every day.” Brady responded, “It’s like I seen you and I’ve known you for 10 years!” On Feb. 7, 2021, the pair won their fourth Super Bowl together against the Kansas City Chiefs. Gronk scored two touchdowns during the game, making him the player with the second-most receiving touchdowns in Super Bowl history, with five in his career. He is second behind Jerry Rice, who has eight. Gronk’s first touchdown of the game was also a first for Brady, who had never before thrown a first quarter touchdown in a Super Bowl. The pair celebrated post-game.