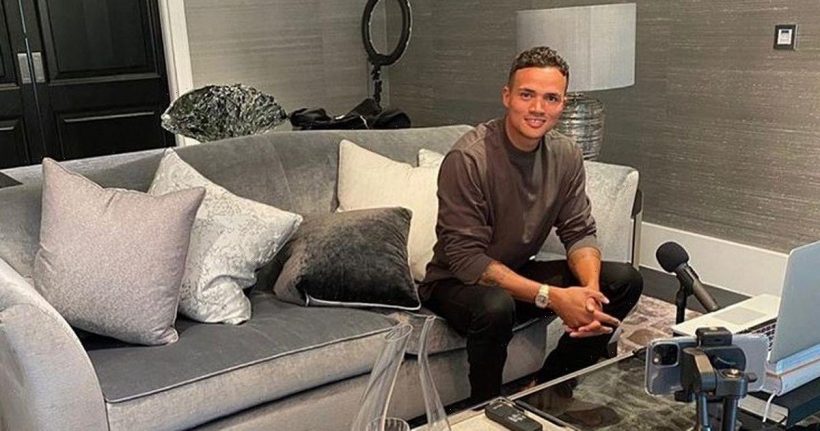 Jermaine Jenas can currently be seen lighting up screens co-hosting the One Show with Alex Jones.

The former footballer is one of a rotation of presenters appearing on the show since Matt Baker left last year.

The sports pundit, who is fast proving a hit with viewers, lives in Hertfordshire with his wife and three daughters in a plush luxury £1 million home.

Like all parents, Jermaine had to resort to homeschooling his daughters following the school closures due to the pandemic.

During this time, the 38-year-old took to Instagram to update fans with his progress and in turn, gave a sneak peak into his home.

The house follows a chic, muted grey colour scheme throughout, boasting a minimalist feel from the kitchen through to the living room.

The lounge area features a velvet grey sofa with matching cushion and a large black and silver coffee table with a glass top.

The living room looks out to a large outdoor space for Jermaine’s young daughters to enjoy.

Jermaine is married to Ellie Penfold and they share two daughters together: Geneva and Olivia. Jemaine has a third daughter, Sancha, from a previous relationship who lives with the family part time. Jermaine told the Belfast Telegraph that “it was love at first sight” when he first met his fiture wife.

However, he then added, “but not for her!” admitting that she was initially put off by the flashiness that is often attributed to footballers.

Luckily, Jermaine managed to win Ellie over and they got engaged in 2009, before marrying in 2011.

While Ellie’s Instagram account is set to private, she does still appear in pictures posted to Jermaine’s account and the couple can often be seen enjoying their time with their two daughters.

Jermaine retired from football in 2016 following a knee injury and has since carved a name for himself in broadcasting.

He regularly features on Match Of The Day and has also filmed a documentary called The Truth about Police Stop and Search.

It is set to air mid May on All4 and draws upon Jermaine’s own personal experiences with the police.

For now, catch him on The One Show sofa.