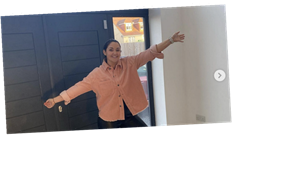 Jacqueline Jossa has shared a first look at her brand new “forever home.”

The former EastEnders actress, who recently opened up on her battle with trolling, has moved into a huge £1 million mansion with her husband Dan Osborne and their daughters Ella, six, and Mia, two.

“There’s so much to do, I feel slightly overwhelmed,” she told fans as she showed fans the huge kitchen.

She explained it needs some “tender-loving care” while revealing a problematic tap and a broken kitchen island.

The kitchen is huge, with shiny grey cupboards spanning the space and state-of-the-art appliances, and Jacqueline told fans they plan to completely refurb the home.

Next, the 28 year old took fans into the garden and told the 426,000 followers on her home account that it was “so much worse than [she] remembered.”

Telling fans it’s “going to be so nice,” the garden is another area which Jacqueline plans on restoring to its former glory.

Despite being huge, there’s a broken wood everywhere and unkempt grass.

Jacqueline said: “It’s a lovely big space, but it needs a lot. Looks like the previous owners had a Mean Girls burnout before they left.

“It’s going to be completely different once it’s done. It needs so much help.”

There’s also another area to the side which Jacqueline tells fans they’re going to pull down.

Dan then takes over the Instagram and tells fans he’s going to have a lego room.

“There’s so much to do with this house, so much to fix. We’re going to make this perfection.”

Jac and Dan’s initial home tour comes after the pair picked up their keys last week.

Soap stars in the news

Sharing a snap of themselves with their daughters and Dan’s son Teddy, the caption read: “BEGINNINGS.

“HELLLOOOOOO!!! Right so… we have so much to do, it’s a big old project, garden needs some serious work and actually the house needs a lot of tender love and care!

“This account is just as much for us as it is for you, we need all the help we can get, inspo is much appropriated!! Thanks so much for all your support. Let’s go team.”

Jacqueline also posted a photo of herself posing in the grand hallway of the new home on Instagram.

“WE GOT THE KEYS. We have waited a while but we picked up the keys to our forever home.

“It needs some tender loving care, a lick of paint and some tweaks. I love love love it so much. I’m so proud,” she penned.