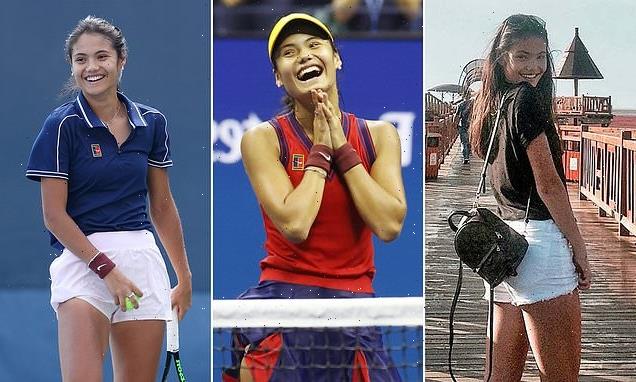 Seduced by the girl with the million dollar smile: JAN MOIR revels in Britain’s pride at tennis star Emma Raducanu

Her first US Open. Nine matches played, zero sets lost, every opponent dismantled and undone under the brisk firepower of her shots and her calm resolve under pressure.

Now, at Flushing Meadows tonight, Emma Raducanu will be the first British woman in a major singles final for 44 years – and the first qualifier in history to go all the way. The question is, dare we dream?

Dare we dream about a new British sporting star, a freshly hatched champion and potential winner of tennis titles for years to come?

Someone who might bring home a trophy this very weekend that has eluded the nation since Virginia Wade won way back in 1968, wearing her hair in a bun while playing a tippy-tap game with ye olde wooden racket. 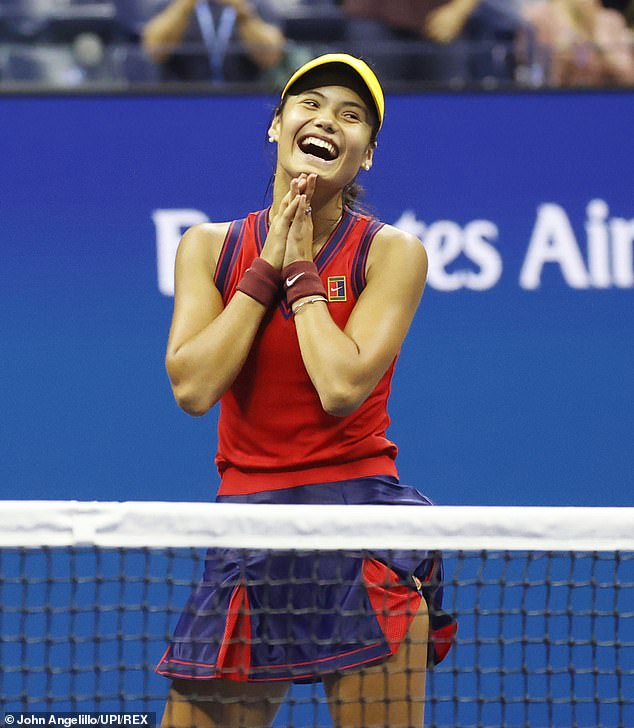 At Flushing Meadows, Emma Raducanu (pictured) will be the first British woman in a major singles final for 44 years – and the first qualifier in history to go all the way. Dare we dream?

A style of playing, I might add, that even she conceded later was ‘a bit boring’.

To 18-year-old Emma, surely all that must seem like some sort of Jurassic age; a time when ancient tennis giants roamed the courts in canvas plimsolls with ankle socks, in an era when topspin and big prize money had barely been invented.

Indeed, while she is the brightest new sporting protege to emerge in the UK for many years, Emma seems terrifyingly young; born in the year that Serena and Venus Williams were facing each other in the Wimbledon singles final for the first time.

Even now, she is barely out of school. Yet despite only finishing her A-levels this summer, Emma has a maturity that stands her in good stead.

On the court and off she exudes the cool poise of a champion in the making; physically graceful, emotionally earthed, completely inspiring.

Even more remarkably – unlike the many taciturn, introverted top seeded players we know all too well – she seems to be full of joy about tennis and her role in the sport.

Sporting protege Emma (pictured) seems terrifyingly young; born in the year that Serena and Venus Williams were facing each other in the Wimbledon singles final for the first time

Win or lose, in good times or bad, Emma’s dazzling smile makes everyone else smile, too. In grand slam tennis, her cheerful disposition is as unusual as it is irresistible.

She is so impressive in every way that parents across the land must be holding her up to their own children as a golden example of what can be achieved with diligence, determination and guts.

And it is particularly delightful that in an age of cynicism and sporting posturing, she seems just as elated by her success as the growing army of fans who follow her every match.

After reaching the last 16 at Wimbledon on her Grand Slam debut earlier this year, Emma, bubbling with the excitement of youth and perhaps grasping for the first time that a wonderful future now fluttered ahead of her, like a golden ribbon, spoke of being astounded by her own capabilities.

‘Some of the shots I was making, I had no idea I could do anything like that,’ she said afterwards, and credited the cheering spectators as her inspiration.

But there is steel there, too, as shown by more than just her incredible bounce back from Wimbledon heartbreak. She digs in under attack, comes back from losing points and has more than a few killer shots in her arsenal.

After watching her play, Virginia Wade described the teenager’s game as ‘ticking every box’ while an appreciative Judy Murray calls her ‘the Teen Queen’.

One of her old teachers at Bickley Primary School in Kent spoke of her former pupil Raducanu in glowing terms. ‘Focused, determination, perseverance, resilience, all of those things. She was always very strong as a character, she was always very determined and you can see that on court,’ she recalled. 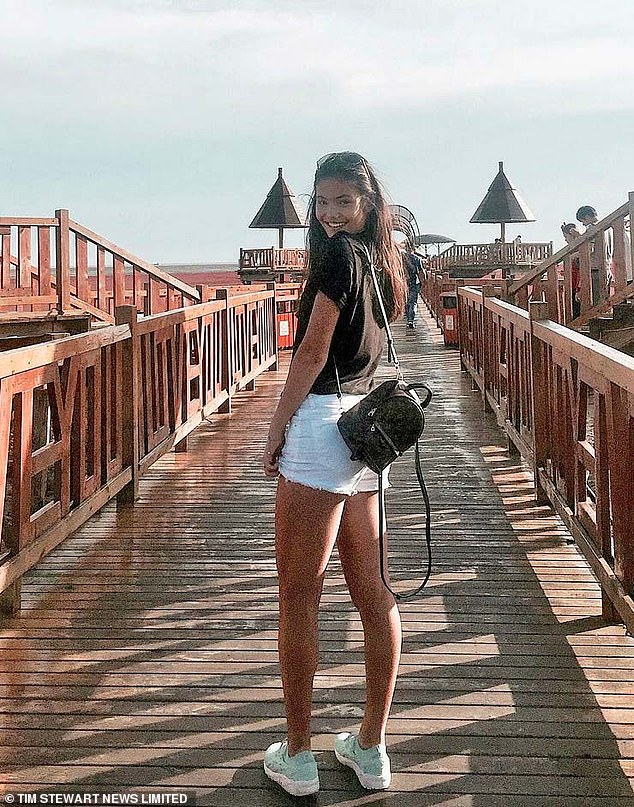 After reaching the last 16 at Wimbledon on her Grand Slam debut earlier this year, Emma (pictured) spoke of being astounded by her own capabilities

What is remarkable is that it is only seven years since the player, who is now the UK’s number one female seed, finished primary school.

‘Time has flown by,’ said Emma, quite the understatement of the century. Her focus has not wavered and her intent all along was to get her exams out of the way and clear the decks.

‘Now I can now focus on my tennis and tournaments and give it everything I have got. Now I feel I can really start my journey,’ she said earlier this year.

How utterly thrilling that this is only the beginning of her journey.

Tonight she will play 19-year-old Leylah Fernandez of Canada for the US Open title – two dazzling teenage girls ushering in an exciting new era in the world of tennis.

Dare we add to Emma’s burden by piling the weight of national expectation upon her shoulders?

It is an encumbrance that has made giants like Andy Murray momentarily buckle on the path to greatness.

But already it seems clear that if anyone can cope, Emma Raducanu can. And she will do it all with a smile, too.