Welfare advocates, including those who have worked with Labor leader Anthony Albanese, are disappointed the party is no longer considering raising JobSeeker, particularly given the leader’s personal experience of living on a low income.

Reverend Bill Crews, who runs the Exodus Foundation which provides support to vulnerable people in Sydney, said Albanese’s history as the son of a single mother who grew up in public housing meant he should know better. 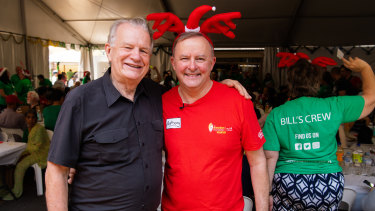 “He’s got a really good idea of what it’s like to struggle because he struggled himself as a kid. That’s why I find it surprising,” Crews, who has served Christmas Day lunch to homeless people alongside Albanese, said. “[Labor’s policy] means struggling people will keep struggling and more work goes our way, it’s disappointing.”

Labor will go to the May 21 election with a policy to keep the JobSeeker payment at $642.70 a fortnight for a single person without children, a decision that has also angered welfare groups.

“How can anyone claim to care about the cost of living without addressing the inadequacy of JobSeeker, which is not enough to cover the cost of food, rent and essential medication?” Goldie said, pointing to Labor’s support for the stage three tax cuts, most of which will go to people on higher incomes.

“People on JobSeeker must not be treated as a political football. It’s unacceptable they appear to be caught up in a scare campaign on budget deficits,” she said.

On Tuesday, Albanese held a photo opportunity at the Father Bob Maguire Foundation in Melbourne with the foundation’s namesake.

Maguire said he has had to extend his charity work – expanding the open pantry in Broadmeadows, and creating the BobKeeper Easter appeal – to support growing numbers of families struggling to get by.

“We’ve got to go make our own money because the governments are not interested,” he said. 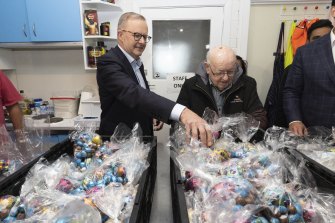 Albanese acknowledged on Wednesday that he has experience of living on a fixed income but said a Labor government was constrained because it needed to remain “fiscally responsible” as a result of record debt levels.

“The truth is, if we are fortunate enough to form government, we will form government at a time where debt is heading towards a trillion dollars, whereby you can’t repair all of the damage or do everything you want to do immediately,” he said at a press conference in Melbourne on Wednesday.

He denied Labor had changed plans on JobSeeker saying, “We haven’t dumped anything. What we have said is we don’t have a plan to increase the JobSeeker allowance in our first budget”.

Crews said adding the coronavirus supplement to income support payments – nearly doubling the basic JobSeeker payment by adding an extra $550 a fortnight – had been good for Australia.

“It’s not good for the nation to keep people on low incomes and unsustainable incomes, putting the pressure on places like us,” he said.

Macguire said if any politicians wanted to help vulnerable people he was only a phone call away.

“If you want change, for God’s sake, get in touch with us, because the time is now- well, in fact, it’s almost beyond time,” he said. “So let’s grasp the nettle. Let’s get it over with. It’s painful when you grasp the nettle, but it’s over.”