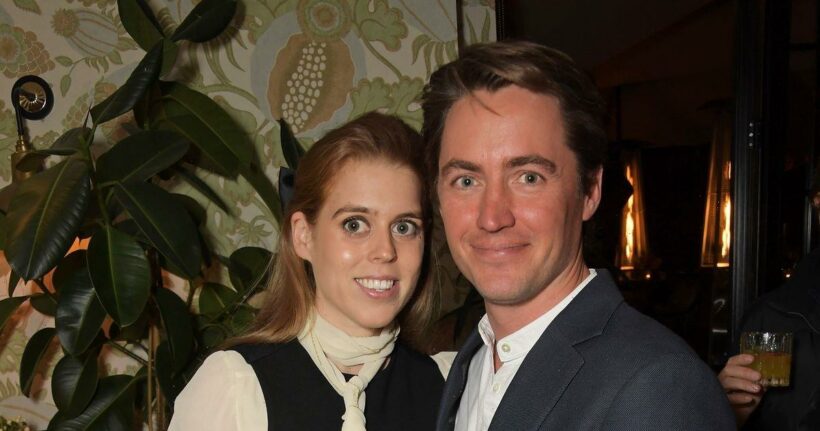 The Queen's granddaughter, 33, who recently chose not to christen her two month old daughter alongside her sister Princess Eugenie's baby August and cousin Zara Tindall's son Lucas, put on a casual display as she pushed her daughter around the festive event in London.

Beatrice, who is 10th in line to the throne, and her property developer husband Edoardo, 38, were reportedly also joined by his five year old son Woolf, also known as Wolfie, from a previous relationship to his ex-partner Dara Huang.

The first-time mum wore a green fur-trimmed jacket and black beanie paired with jeans and ankle boots for the outing and added a pop of colour to her ensemble with a teal scarf, in pictures obtained by the Mail on Sunday.

Meanwhile Beatrice pushed her baby in a grey £1,000 Fox 3 Bugaboo pram which had a meaningful charm attached to the handle.

The royal looked in her element as she tucked into a traditional bratwurst in the Bavarian Village with her family-of-four.

However, taking a closer look at the pram, we can see that mum-of-one Beatrice has added an evil eye charm to the handle.

The evil eye symbol is believed to guard against misfortune in somebody's life, bringing good luck and protecting from any ill-will that could have a negative effect on your well-being or your life in general.

Yet, Beatrice is not the only royal to be a fan of the evil eye symbol after Meghan Markle was seen wearing an evil eye necklace on a video call in April last year.

The stunning necklace was an 18-carat gold-plated silver charm from Edge of Ember which costs £135, and, according to its maker, the pendant 'bears a blue topaz evil eye to protects its wearer from negative vibes'.

Meghan has been seen wearing this evil eye symbol before, too. She was seen wearing a £450 18-carat whilst giving a speech at the Nyanga township in Cape Town.

According to the designer's website: "As per Ottoman legend, an evil eye on your person wards off jealousy from others."