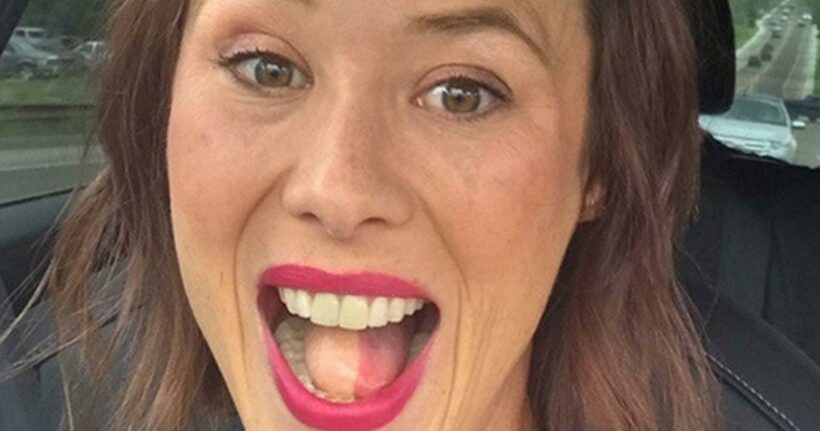 A mum who had part of her tongue replaced with leg tissue says it's now started to 'grow hair'.

Cameron Newsom, 42, lost part of her tongue after a battle with cancer.

She had a new one made out of part of her leg. And although she was glad to get rid of the cancerous growth and have a new tongue, she was shocked to discover it was capable of growing hair.

Cameron was diagnosed with skin cancer of the tongue – squamous cell carcinom – after noticing spots on her tongue on a few occasions. However, it took a few trips to medical professionals for her to get the diagnosis.

The Colorado Springs resident said: "At the time of my diagnosis I'd lost over seven pounds because I was unable to eat or drink.

"It took three years from when the first spot originally appeared for doctors to finally diagnose me – no one ever mentioned it could be oral cancer.

"When I was told, it seemed like I was being handed a death sentence there and then, but straight away my reaction was: I'm ready to fight this.

"I was 33 at the time and in very good shape, so I couldn't understand why this was happening to me.

"When I got home that day I googled my type of cancer and as you can imagine the results were absolutely terrifying.

"There were images of people after having their jaws removed or sawed in half – I'd never been so scared."

After years struggling with pain and nearly unable to eat, as well as undergoing several rounds of chemotherapy, Cameron had to have the tumour removed from her tongue.

They grafted part of her thigh onto her tongue in the nine-and-a-half hour operation.

Cameron added: "They usually take skin from your forearm, but I’m only five foot two, so I didn’t have enough skin on my forearm to replace what I was having removed.

"The next few weeks were hell because my mouth was so swollen I couldn't swallow or breathe unassisted.

"I had to be under constant observation and every time my throat had a build-up of blood and body fluid, it had to be flushed away using water.

"That was basically like being waterboarded by the nurses once or twice a day which was absolutely horrific.”

However, the weirdest part – the hair growth on the tongue – was still yet to come.

Cameron explained: "I felt a rough texture on the thigh part of my tongue – and when I looked in the mirror it had started growing leg hair!"

She says she's now learned to use her new tongue properly, although speaking, eating and even tasting are completely different to before.

The mum added: "I had to teach myself how to speak again after the radiation therapy which was a really bizarre feeling.

"My manners are terrible because food sometimes just falls out my mouth, and when food gets stuck underneath my tongue it feels like having a small rock in your shoe."

Despite the slight downsides of her new tongue, Cameron's cancer appears to have stayed away, and she’s back at work as a gymnastics coach after a years-long ordeal.

She concluded: "It's now been nine years since my diagnosis and there's been no signs of regression.

"The longer you go without regressing the less likely it is the cancer will come back, so were all feeling really positive.

"2013 was the toughest year of my life and I couldn't have done it without the support of my amazing Antony and the rest of my family."