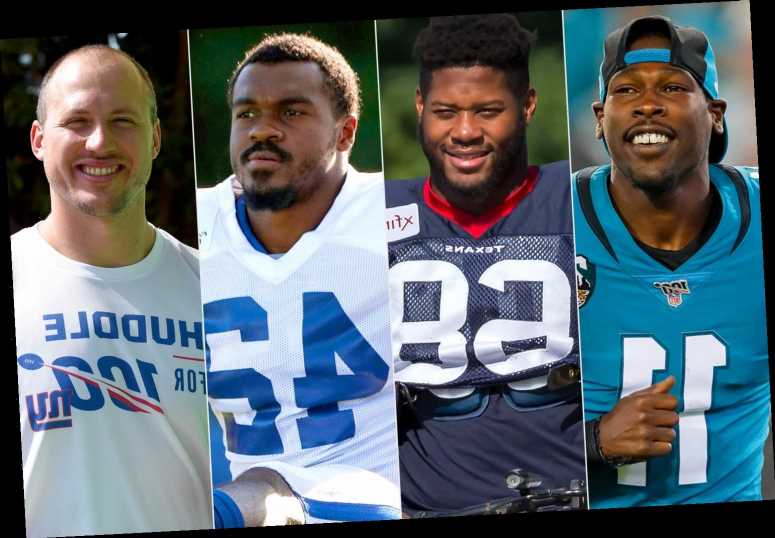 Nearly 70 NFL athletes voluntarily sat out of the 2020-2021 season due to COVID-19 concerns, with many stars prioritizing the lives of their loved ones over their careers.

As the NFL's postseason culminates with Super Bowl LV on Feb. 7, so far 262 players have tested positive for the coronavirus since the league and its Players' Association started a daily testing program in August 2020.

The unprecedented season has been rocked by the global health crisis as players and staff navigated game postponements, crowd-free stadiums and rigorous protocols. Meanwhile, in a new ESPN profile, several footballers who skipped the current season spoke about having no regrets in choosing to stay off of the field.

"Of course I wish I was out there. I can't look back on it. That causes stress that I don't need," Malcolm Pridgeon said. "I feel like if someone was in my shoes, they would've made the same decision I made."

In addition to being considered higher risk for the virus due to hypertension, Pridgeon, 26, had a particularly tough offseason due to the death of his mother Peggy Jean White, whom he chose to support instead of playing with the Cleveland Browns this season. According to ESPN, White, 60, died of COVID-19 on March 31 at the Berkshire Nursing & Rehabilitation Center in West Babylon, New York, where she had resided after suffering a heart attack and a stroke that left her paralyzed from the waist down.

"I feel hurt. I don't know if I'll ever get picked to play on the team after I opt-out," Pridgeon recalled telling his sister about feeling conflicted this season. It was even harder for Pridgeon, who watched on the couch as his team had a bit of a comeback bid: the Browns made the divisional round before losing to the Kansas City Chiefs.

Speaking of the Chiefs, one of the first to publicly opt-out of the season was Laurent Duvernay-Tardif, a starting guard on the defending championship team who is also a frontline healthcare worker. The Chiefs star, 29, has been documenting his day-to-day shifts in the hospital on Instagram during the same few months that his teammates clinched another Super Bowl appearance.

Duvernay-Tardif, who was named one of Sports Illustrated's Sportspersons of the Year along with teammate Patrick Mahomes, released a lengthy statement about his decision to commit to saving lives amid the pandemic after the NFL announced in late July that the league and PA agreed on an amendment for players at high risk of COVID-19 complications to sit out the year, receive $350,000 and accrue a season toward free agency.

A player could opt-out later if his family member died, was hospitalized or otherwise moved to a medical facility because of COVID-19 or a related condition, according to the league. The guidelines also stated that players not deemed high risk could obtain a $150,000 stipend toward their 2021 salary (with no accrued season) and their contracts would be applicable to the following season.

"I really didn't think they'd make it this far. I knew they'd probably make it halfway, maybe a little past halfway through the season. Everybody did a good job of handling their business for the most part and being able to let the season play all the way through," Indianapolis Colts star Rolan Milligan admitted to ESPN.

Milligan opted out to protect his high-risk family, including his pregnant girlfriend who only has one kidney. "She knew how much playing meant to me. She didn't want to be the reason why I didn't play," he told ESPN. On Jan. 27, the safety welcomed baby Loyal Isaiah Milligan.

And, New England Patriots receiver Marqise Lee, also a new father, opted out because of his newborn daughter. Lee told ESPN that coach Bill Belichick called his decision to skip football to be with his child a "grown man's decision."

Another man prioritizing the safety of his child is New York Giants' Nate Solder, who is a testicular cancer survivor and father to a 5-year-old son battling cancer.

"In a lot of ways, I felt like I was letting my teammates down," Solder, 32, told ESPN. "I felt like I was letting the new coaching staff down. The fact is, as a 32-year-old NFL player, it just hurts my chances of having my career trajectory take off at this point. I just have to trust in God and see where he leads me. Trust me, it was an internal tension. But once it became clear, the priority of my family's lives, of our children and my in-laws and parents and all the connections in our community, man, I just value people more than I value my career in the NFL."

Though these athletes chose not to participate in the NFL, that is not to say they are unprepared to return.

Los Angeles Rams offensive tackle Chandler Brewer, who was previously diagnosed with non-Hodgkin lymphoma, told ESPN he was catching up on his team's archived meetings and game film despite knowing he would never play. "I'm coming back, and this is going to make me better, having rest and recovery. I'm going to be ready to go and not miss an inch," he said.

The Tampa Bay Buccaneers and the Kansas City Chiefs are facing off at Super Bowl LV on Sunday in Tampa. The game will air on CBS at 6:30 p.m. EST on Feb. 7.