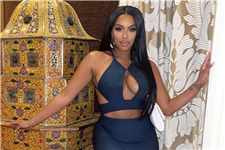 ​​The reality starlet took to social media to announce that she will be officially leaving the show after ten years.

It’s a season of big changes for Porsha Williams. Having recently gotten engaged after a whirlwind romance with co-star Simon Goubadia, she’s now moving on to her next chapter beyond Real Housewives of Atlanta.
Williams took to her Instagram to share the news with her fans and supporters, and to thank Andy Cohen and the rest of the Bravo team for helping to make her a household name over the last decade.

“After ten life-changing, gratifying, incredible years, it is finally time to begin my next chapter,” she wrote. “Next season, I will not be returning to the Real Housewives of Atlanta franchise.

“This was a difficult decision to not only make, but also come to terms with. It’s one I have put a lot of thought into and because of that, I know it’s the right one.”

This news comes amid several cast shakeups for the hit reality show, as co-star Cynthia Bailey announced her own exit just the other day.

“I have so much love and endless gratitude for my Bravo family and supporters. You’ve made the past decade a truly special one,” she continued. “One where I’ve dealt with unbelievable highs and unbelievable lows, and I can honestly say I would not have made it through some of them without the unconditional love and support I have gotten from all of you.”

But, as Porsha noted, this is far from her exit from the public eye. She not only teased a speedy return to our television screens but also announced her new memoir, The Pursuit of Porsha, set for release on November 16.

“Don’t worry though, I’ll be back on your TV very soon,” she shared. “I can’t wait to share all of my exciting new endeavors with the world-beginning with the release of my memoir, The Pursuit of Porsha, out on November 16. As for the rest, you’ll just have to wait and see!”