The caterers at the center of the drama in this week’s “Real Housewives of Salt Lake City” episode are emphatically defending Lisa Barlow.

“Lisa had NOTHING to do with them not being able to do Angie’s event — and Angie knows that,” the office manager for chefs Marco and Aubrey Niccoli told Page Six on Wednesday.

“The truth is that they had just opened their restaurant and had prior commitments.”

Angie Harrington, who made her debut on Sunday as a “friend of” current “Housewife” Whitney Rose, questioned whether Barlow, 44, was behind the caterers pulling out of the event, meant to raise funds for LGBTQ youth.

“Lisa’s sabotaging you,” Rose, who has had a rift with Barlow since Season 1, told Harrington, later telling the camera, “I may be blonde but I am not stupid. This is not a coincidence.”

Harrington then admitted in a confessional that she believed the Vida Tequila CEO was — despite their decades-long friendship — “capable of meddling in my event because she doesn’t want me to be friends with Whitney.”

The Niccoli’s office manager also told Page Six on Wednesday that the caterers had previous conversations to film with other “Housewives” at their restaurant, so “that’s the direction that made the most sense for their business.”

Further explaining that they did not leave the “RHOSLC” newbie hanging, the rep added, “They helped Angie find a different caterer, who ended up being Chef Marco’s brother’s catering company.”

Aubrey also addressed the backlash she and Barlow received via her social media on Wednesday, stating that Harrington “completely fabricated this story to create a storyline for herself.” 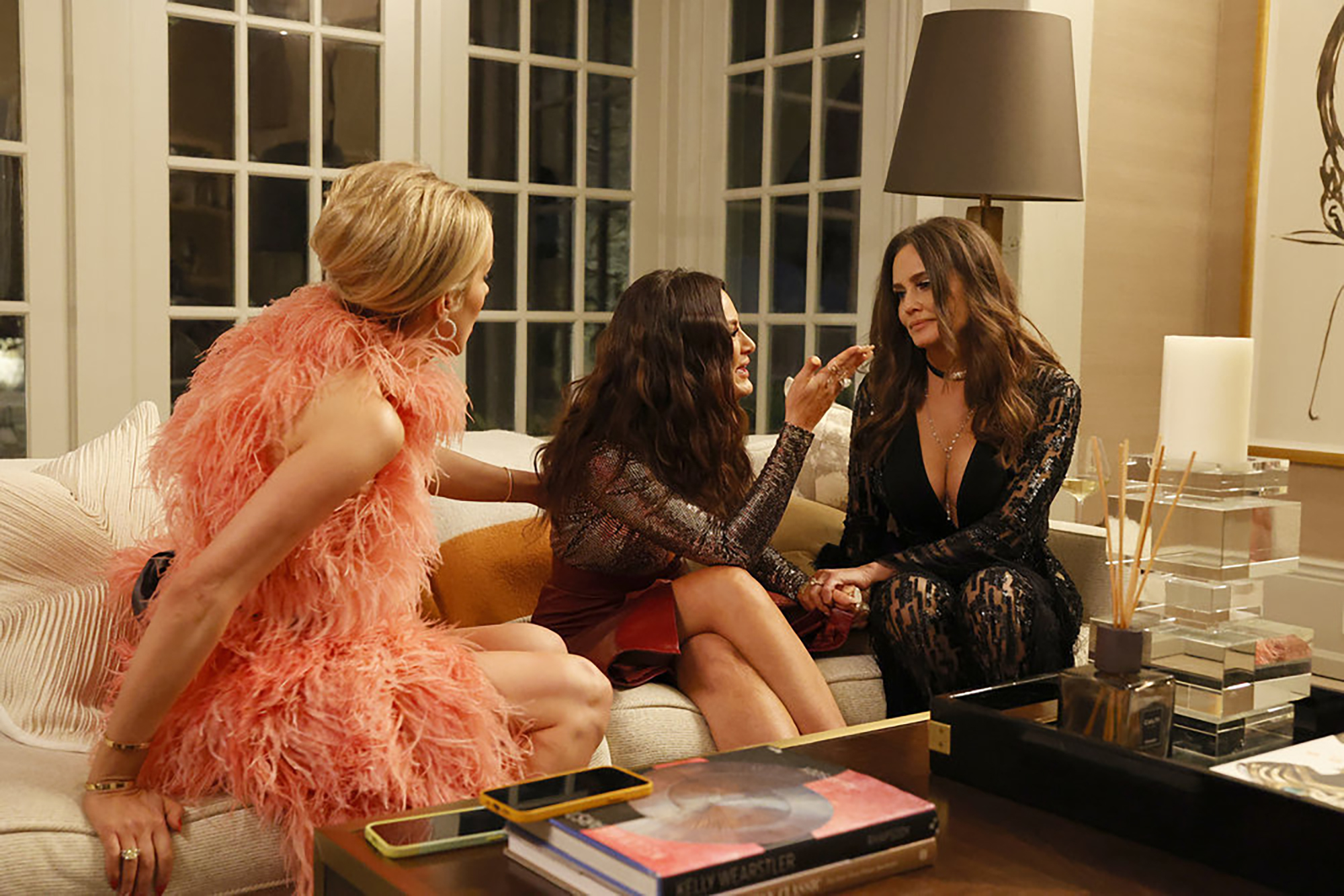 “She has falsely accused @lisabarlow14 of sabotage,” the chef wrote in a lengthy Instagram caption. “Accusing us of bad business, and it is absolutely disgusting, hurtful and most importantly FALSE.”

“We chose not to do Angie’s event ultimately as a business decision,” she added. “We had prior conversations with Lisa and Jen’s assistant (Stuart) to tentatively film at our newly opened restaurant. I said yes to gather more information about her event to see if we could do it.”

Screenshots of Harrington’s text exchange with Aubrey surfaced on the Bravo super-fan account, @cocktailsandgossip, showing that the chef at first said “absolutely” to catering the event, adding, “Just let us know when and we’ll make it happen!” 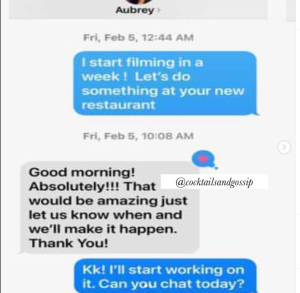 The Niccoli’s office manager explained to Page Six that Aubrey “tentatively said yes to get more information about the event from Angie and from the production team.”

“Once they spoke with Dina [producer from Bravo], they made the ultimate decision to decline,” the rep added. “There were multiple reasons why it didn’t make sense for them to do Angie’s event and they chose to film at their newly opened restaurant Niño Viejo as a business decision.”

The office manager then reiterated, “The decision had nothing to do with Lisa Barlow. It was a decision based on what was best for their business.”

A second text exchange sent days after Harrington and Aubrey’s initial conversation backed up what the office manager told us. It showed Aubrey pulled out over concerns that their company would not get mentioned on the show and not get any promotion. 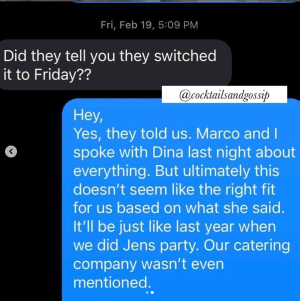 “I never fully committed [to] or took a deposit from Angie,” Aubrey added in her Instagram post on Wednesday. “And the truth is she asked us to do it for FREE for advertising since it was going to be filmed.”

The chef then dropped another bombshell, “She also told me not to tell Lisa!,” adding the receipts of those texts in the post.

“It also is completely normal to get all of the information about an event before signing contracts and taking a deposit. That never happened,” Aubrey explained. “We kindly declined after a call we had with a Bravo producer named Dina. NOT talking to Lisa. I cannot say this enough… Lisa did NOT tell us to not do Angie’s event. Never happened and she never would do something like that. Let it be known Angie is the liar and the one sabotaging our name our business and Lisa.” 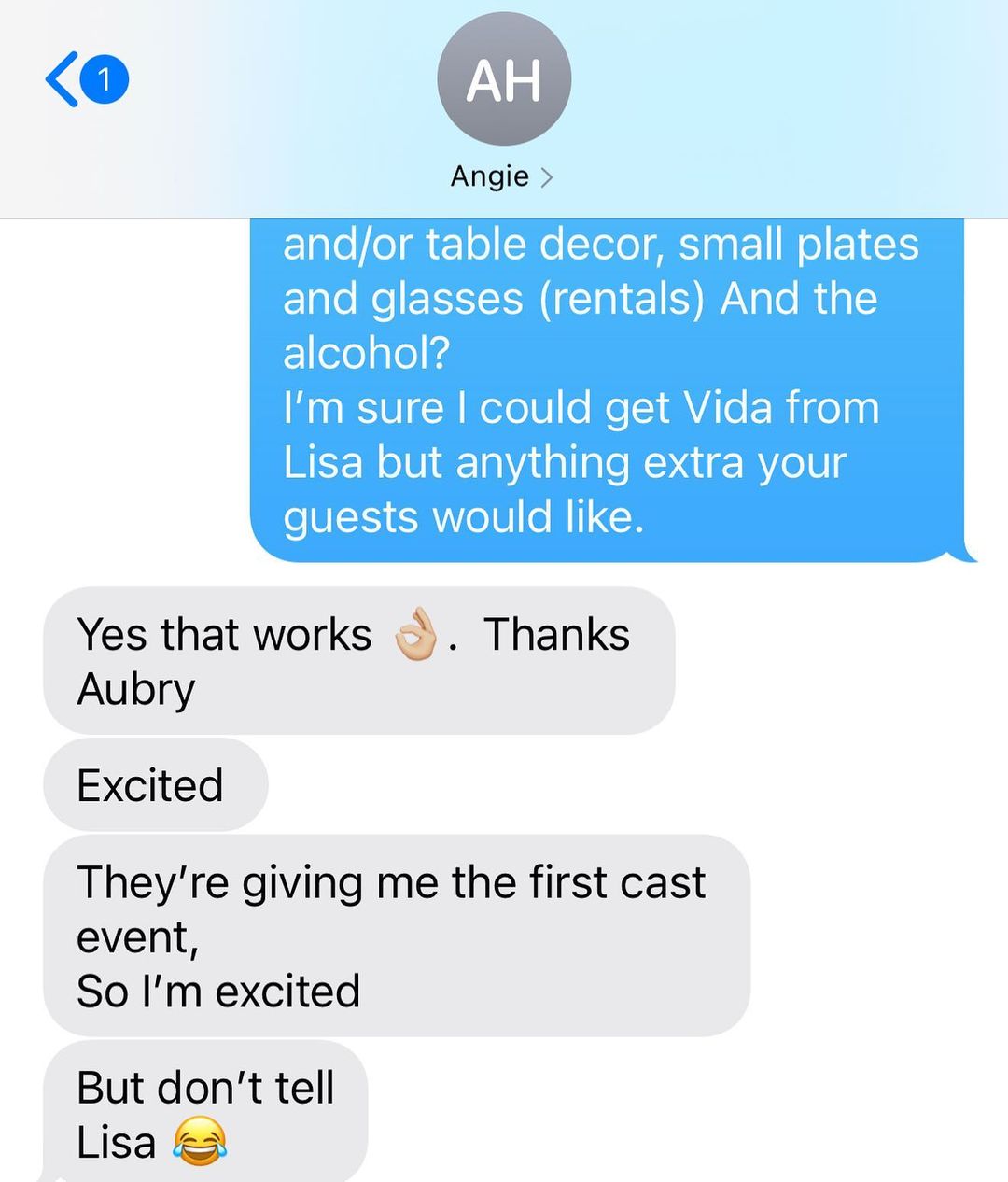 Barlow and Harrington did not immediately respond to Page Six’s request for comment. But Barlow defended herself on Instagram Monday, writing in part, “I would never cancel a caterer nor is that something anyone could do @marconiccoli and @aubreyniccoli are amazing people.”

Aubrey concluded by writing on her Instagram Stories, “It’s sad that people want to attack small business owners in the food and beverage space especially during these times. Unbelievable.”