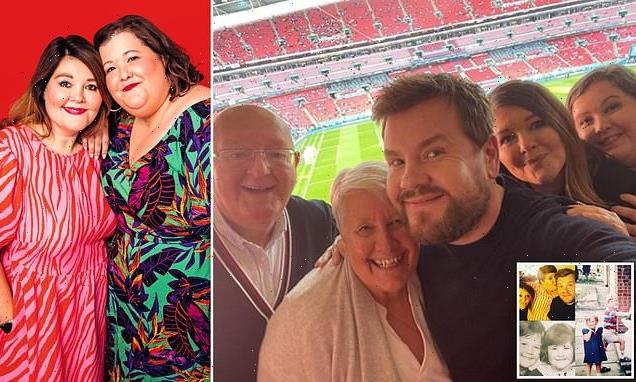 James had a chat show… even when we were kids: Following in their famous brother’s footsteps with a hit podcast, Ruth and Ange Corden recall glorious family times with the Late Late Show host

Back when James Corden was just an ordinary kid growing up in Buckinghamshire, he and his two sisters used to play one particular game.

‘We’d do our own chat show when we were in the back of the car,’ Ruth Corden recalls now.

‘James was the host, and Ange and I would be his guests. I remember one where Ange was the world’s strongest woman – she had her own theme tune and everything – and I was upset because I was given Mother of the Year, which seemed rubbish in comparison.’

Fast forward a few decades and James, now 43, has one of the biggest chat show gigs in the world in The Late Late Show, broadcast to many millions in America. It’s brought him a multi-million-dollar payday of the kind the Corden siblings could barely have imagined when they were doing their role-play. 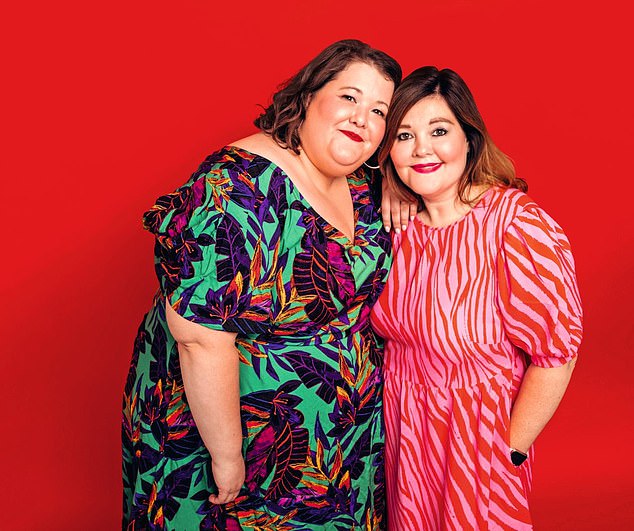 Ruth and Ange (pictured), who grew up playing in their own chat show with their brother James Corden, are sharing their wit in podcast Finding The Funny

That said, neither 45-year-old Andrea (known as Ange) nor younger sister Ruth, 39, are entirely surprised by their brother’s astonishing success.

‘Because I’m the eldest, I can really remember how James always loved being the centre of attention,’ says Ange. ‘He did all the school plays, from primary school right through secondary. He just had this sheer determination to make it happen for him.’

But nor did his sisters entirely miss out on the performance gene. While they have less starry day jobs – mother-of-two Ange is an executive PA while Ruth works in social care – they have the same quick wit as their famous brother and have recently been channelling it into a well-received podcast.

Finding The Funny is a down-to-earth and humorous riff on the frustrations of being a ‘grown-up’, and features the occasional celebrity guest: they’ve had Emmerdale’s Lisa Riley, comedian Romesh Ranganathan and DJ-turned-author Fearne Cotton.

Subjects they’ve covered include the ‘dos and don’ts’ of hen dos, terrible dad jokes, stubbed toes and even dishwashers – basically anything that’s baffling or gets their blood boiling.

Fearne talked about a wild weekend of clubbing with Paris Hilton, and Lisa spoke about her time on Strictly Come Dancing. Romesh discussed male grooming, and the rather more serious subject of the racism he faced growing up.

‘We absolutely wouldn’t call ourselves comedians, but I think there’s something quite joy-giving about the podcast,’ says Ruth.

‘It’s us having conversations that we think happen between people day in and day out. It’s “These things irritate me” or “I find this ridiculous.” We think there’s something for everyone.’ 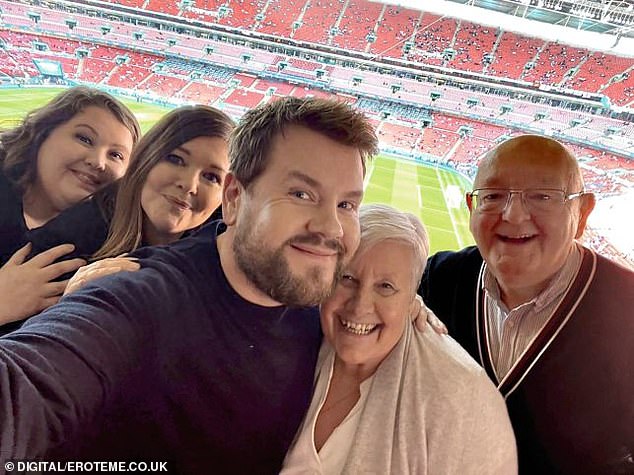 Ange said she was the peacekeeper in their household, and the siblings have their own WhatsApp group. Pictured: The Cordens together earlier this year

Of course, it’s not easy following in the footsteps of a global star, but it does seem that funny bones run in the Corden family. Dad Malcolm, a musician in a Royal Air Force band, is by all accounts something of a raconteur, while social worker mum Margaret is ‘really funny’ even if she doesn’t always know it.

‘We’ve always been very good at being able to laugh at ourselves; that’s been a huge part of our upbringing,’ says Ange.

It’s a theme that continues to this day. ‘James, Ange and I have got a WhatsApp group and we have a lot of fun on that,’ says Ruth.

‘It’s that sibling thing: we can all look at each other in a situation and fall about laughing.’

Theirs certainly seems to have been a happy household, although it wasn’t always a bed of roses. James, a ‘wind-up merchant’, and Ruth in particular had no end of the kind of ding-dongs recognisable to older brother and younger sister duos the world over.

‘Basically, I was the peacekeeper,’ says Ange. ‘I probably still am a lot of the time.’

It was Gavin & Stacey, the much-loved BBC sitcom co-written by James, that would propel him to superstardom. And it was the relationship between James and Ruth that provided the inspiration for the one between James’s character Smithy and his sister Rudi (played by Sheridan Smith).

‘Rudi was my nickname growing up, and while I’m nothing like the character I think Ange would recognise that relationship,’ says Ruth with a smile. ‘Especially the immature name-calling.’ 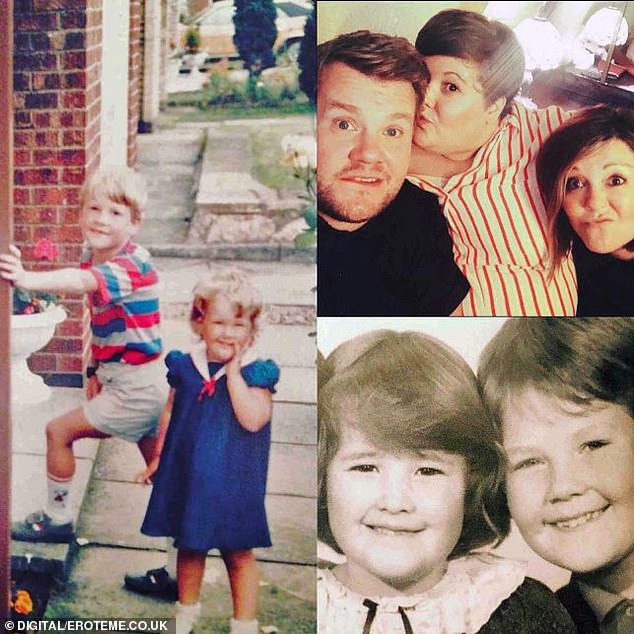 In a neat twist, Rudi is introduced on screen by Ruth, who appeared in an early episode as a fast-food drive-through worker.

‘Gavin drives up and says “Is Smithy there?” because Rudi calls herself Smithy too. And I get her. You find out later that her nickname’s Rudi and her real name is Ruth. So James’s real-life sister actually introduced his on-screen sister.’

Today James lives in a Los Angeles mansion with his wife Julia and their three young children. But Ruth and Ange insist that while their brother’s backdrop may have changed, the family dynamic hasn’t.

‘We’ve continued to be the same family, whether he’s hosting The Late Late Show or when he was working in the local supermarket,’ says Ange.

‘And I think that’s really important to him too, to know that we will always be those people in his life and that nothing will ever change regardless of what he’s doing.’

That doesn’t mean there haven’t been all manner of what Ruth calls ‘pinch me’ moments. ‘Ange and I got to fly with James on a private jet to LA,’ she says. 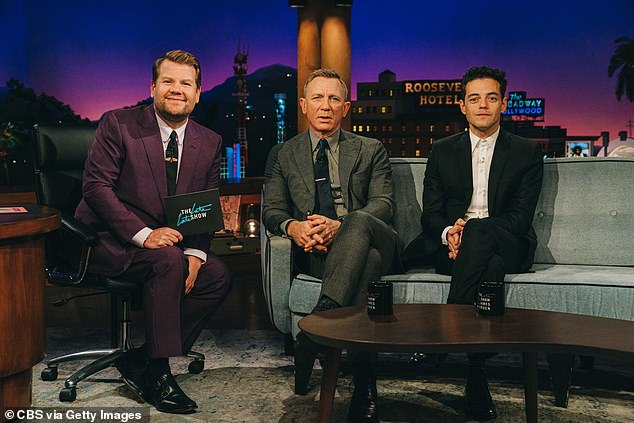 Ange said it was difficult not seeing James when the pandemic struck, as they were used to him coming home twice a year. Pictured: James with guests on The Late Late Show

‘Experiences like that make me think, “God, you’d never have experienced this without James’s lifestyle.”’

‘That was iconic,’ says Ruth. ‘The three of us would watch the Brits as teenagers and try to guess who was going to win. So to be there watching James at the podium was surreal.’

Even global celebrity is no panacea for a pandemic though and, like every family, the Corden clan has struggled to see each other in the flesh. ‘Before Covid we were very used to James coming home twice a year, then suddenly that couldn’t happen which was difficult,’ says Ange.

At least their lockdown was productive, as their podcast sprang out of their sisterly Zoom and FaceTime chats. ‘The first episode had 35 downloads, which felt like a lot,’ says Ange. A year on and they’ve had over a quarter of a million.

What a turn-up it would be if they became A-listers too: people would be asking their parents for the formula.

‘People say to them all the time that they must be so proud of James,’ says Ange, ‘and they say, “We’re proud of all of our children.”’

Finding The Funny With Ruth & Ange is on all major podcast platforms.