Deputy Prime Minister Barnaby Joyce says he has not changed the Nationals’ position on setting a net zero carbon emissions deadline since he was re-elected to lead the party after deposing Michael McCormack last month.

Prime Minister Scott Morrison has been tilting towards a commitment to net zero emissions. He “preferably” wants to achieve the goal by 2050, but qualifies that with a caveat that economic costs must be mapped out before a deadline is set. 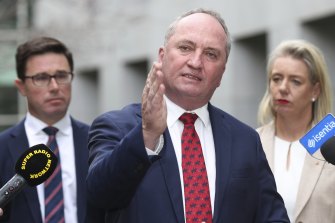 When Mr Joyce represented the Nationals from the backbench during the past three years, he was a strident critic of emissions reduction policies. His arguments fuelled criticism of Mr McCormack for not directly opposing Mr Morrison’s perceived openness to more ambitious climate action.

But Mr Joyce said on the ABC’s Insiders program on Sunday that he would consider a deadline, given the same caveats set by Mr Morrison and Mr McCormack.

“Show us what’s on the menu and show us what it costs and we’ll decide whether we’re going to eat it,” Mr Joyce said.

The Morrison government’s climate policy centres on a technology road map to guide investment in lower-emissions initiatives such as hydrogen fuel, green steel and aluminium and carbon sequestration in agriculture, which is aimed at driving industry uptake. It has not yet published modelling of alternative approaches including the costs and opportunities for industry of setting an emissions reduction deadline.

In his first interview since losing the leadership on June 21, Mr McCormack told this masthead it might be necessary to adopt a net zero deadline but stressed the agricultural sector must be shielded from harm.

“In the future, if our trade, our beef and sheep meat and our wool depends on it, for example, then we should have the conversation about going to net zero,” Mr McCormack said.

In an interview with The Australian Financial Review published on Saturday, Mr Joyce suggested the Nationals were opposed to a net zero deadline.

“The likelihood of Joyce getting endorsement from his party room to agree to net zero is zero,” he said, speaking of himself in the third person.

Mr Joyce refused to respond directly to Insiders host David Speers, who asked if the New England MP had approached a colleague to sound out Nationals Gippsland MP Darren Chester about running as Mr Joyce’s deputy in his leadership challenge.

Many wealthy nations have committed to net zero emissions by 2050, including Australia’s major trading partners in the UK, EU, the United States, Japan and South Korea, and many have set targets to halve emissions by 2030.

Most Australian agriculture groups believe there is a trade opportunity in climate action and have made their own net zero commitments.

“Michael McCormack is slightly better on the issue than the letter of the National Party. But they are all pretty hopeless when it comes to seizing the opportunities for rural and regional Australia.“