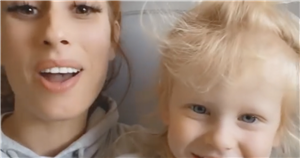 Stacey Solomon has revealed that she is “so moody” and “needs to go to bed” after the pandas she hung on Rex’s bedroom wall looked like they were “grabbing each other’s bums”.

The 31 year old, who has recently transformed her one year old son Rex’s bedroom, has been putting the finishing touches in the gorgeous monochrome space at her £1.2million Essex home.

However craft enthusiast Stacey, who has been renovating Pickle Cottage with her amazing “tap to tidy” projects, was left red-faced after her pandas resembled a “human centipede” on the wall.

In keeping with the animal theme of Rex’s bedroom, Stacey hung three stuffed toy pandas diagonally on the wall above the radiator.

However, her youngest Rex, who she shares with fiancé Joe Swash, 39, and nine-year-old son Leighton, from a previous relationship, could not stop laughing at the “panda bums” on the wall.

Stacey said: “I thought this was a really good idea but these two are just taking the micky out of it.

“Thought it would be lovely to hang some teddy pandas on the wall and these two are cracking up at it because apparently it looks like they’re all just grabbing each other’s bums. Fantastic.”

The Loose Women panellist was not put off by the opinion of her sons, adding: “Okay so the boys may well be right but I love them. I definitely won’t finish in here today. It’s dove o’clock and I’ve 100 per cent given up.”

Stacey was later seen relaxing in her 2.5-acre garden at her gorgeous home and revealed how she had “abandoned everything and everyone” following her DIY fail.

“I have just abandoned everything and everyone today and come back with the bluebells because they are the only living thing in this house right now not getting on my nerves,” she said.

“I don’t know why I am so moody. I think the human centipede pandas did actually send me over the edge.

“And now Joe is insisting on and industrial hoover we hired just to clean up the sand to do the general hoovering that we all know full well Henry could do perfectly.

Stacey made a loud vacuuming noise, adding: “Worse that that actually he loves to tell me that he has hoovered for me. So, he is like: ‘Ah, I have just hoovered the kitchen for you.’

“Thank you. I didn’t realise I was the only person who doesn’t love walking around on crumbs and muddy footprints. Thank you so, so much!”

Captioning the footage, she penned: “Think I need to go to bed to be honest.”

She wrote: “Bluebells are more fun than people. Fact.”