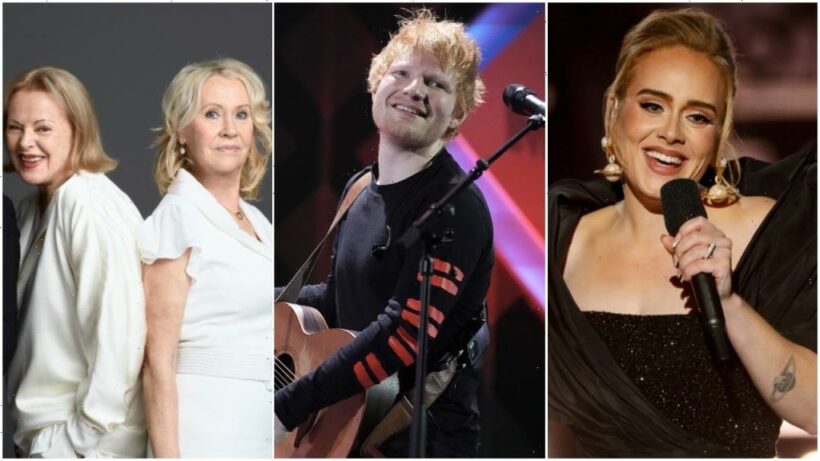 Adele, Ed Sheeran, ABBA and Olivia Rodrigo had the top albums of 2021 in the U.K., according to a new survey of the year in music released by the BPI, based on Official Charts Company data.

The overall news was positive for the record industry in Europe, with an asterisk: Streaming was up a fairly healthy 5.7% for 2021 over the previous year. But overall consumption was at 2.5%, a modest figure compared to the far greater leap of 8.2% in 2020, and 7.5% the year before that.

Still, the BPI, the consortium of labels in the U.K., had plenty of positive stats to crow about. Among them: Weekly streams topped the 3 billion mark for the first time ever in June 2021, and then it happened three more times in the month of December. Streaming accounts for 83% of music consumption in the U.K., with gains also registered by surging vinyl and the niche market for cassettes. Those gains losses for compact discs and digital downloads, formats in danger of facing a near-extinction event.

The 5.7% streaming increase in the U.K. added up to a total of 147 billion audio streams. It was spread out among hitmakers, with 180 artists topping the 100-million stream mark and close to 2,000 artists earning at least 10 million streams.

Vinyl LPs and CDs managed to register nearly equal percentage changes — in opposite directions. Vinyl was up 10.6% and compact discs were down 10.5%. Because CDs had accounted for more of the market than LPs, the figure for overall physical albums amounted to a drop of 5.5%.

The year’s biggest loser in the U.K.? Digital album sales, registering a whopping 23.1% decline for the year.

The year-end album chart had “30” in the lead, even with Adele’s blockbuster having come out only about six weeks before the end of the year. Sheeran’s “=” was in second place, followed by ABBA’s comeback, “Voyage,” in third —both of them also late fall arrivals that made up for lost time.

The top 10 albums ranking included three greatest hits sets, by Queen (No. 5), Elton John (No. 8) and Fleetwood Mac (at No. 9). Other slots belonged to fresher albums that have been smashes on both sides of the pond, like Olivia Rodrigo’s “Sour” at No. 4 and Dua Lipa’s 2020 holdover album “Future Nostalgia” at No. 6. Even though eight of the top 10 were albums by Brits, nearly all were global successes; only Dave, whose “We’re All Alone in This Together” landed at No. 10 for the year, would count as largely unfamiliar to Americans.

Sheeran really managed to score by being the only artist with two albums in the top 10, as his “=,” the No. 2 album for the year, was followed by a still-thriving older release, 2017’s “Divide,” at No. 7. Sheeran only had one tune among the top 10 songs, but it was the biggest one, as “Bad Habits” was No. 1 there.

On the end-of-year singles chart, there were two artists who each landed a pair of tunes in the upper ranks. Rodrigo’s “Good 4 U” and “Drivers License” came in at Nos. 2-3, while the Weeknd’s “Save Your Tears” and “Blinding Lights” landed at Nos. 4 and 9. But it was Sheeran earning the top spot among singles, with “Bad Habits” at No. 1. Adele and ABBA, despite having their new releases ride at near the top of the album chart, did not land any singles in the top 10.

ABBA did make it to No. 1 in one ranking, the vinyl chart, with “Voyage” charging ahead of second-place “30” as the top LP. Although cassettes still count more as souvenirs than a real sales force in the market the market, Rodrigo’s “Sour” was tops among analog tape releases, a niche that increased 10.6% for the year in the U.K

“As our lives continue to be disrupted, the past 12 months have reminded us again of the important role that recorded music plays in our lives,” said Geoff Taylor, chief executive of the BPI, Brit Awards and Mercury Prize. “At the same time, the rise of streaming has empowered more artists than ever – from all backgrounds and eras – to build new fanbases around the world and to forge successful careers in music, while record labels have continued to provide the investment and support needed for British talent to thrive and reach a truly global audience.”

The BPI report singled out some homegrown acts that did well despite not dominating the year-end charts as authoritatively as some of the above-named acts. It noted that No. 1 albums were achieved during the year by British acts including Dave (who debuted with 74,000 units in July), Sam Fender, Wolf Alice, the Lathums, the Snuts, Bring Me the Horizon, Manic Street Preachers, London Grammar, Mogwai, Noel Gallagher’s High Flying Birds, Royal Blood, You Me at Six and Coldplay.

Top 10 rankings for three of the charts cited in the report: