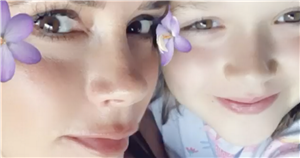 Victoria Beckham, 47, has shared her delight at daughter Harper becoming a prefect at school.

The mum-of-four took to Instagram to share the proud moment as her 10 year old excelled at school.

Sharing a snap of adorable Harper's school sash, Victoria wrote: "It's not just any old badge! It's MAJOR!!!"

There was a prefect badge as well as a vice-captain badge captain in pride of place.

Sports badges could also be seen on the purple belt, and Victoria told fans it was a "proud mummy moment!!"

Emotions ran high in the Beckham household recently, as dad David gave his sweet daughter Harper a tight hug after she admitted she was "nervous" to go back to school.

Summer is officially over for the ten year old who recently returned to West London following a fun-filled break in Miami with her family.

And in a clip shared by Victoria Beckham on Thursday, former professional footballer David, 46, asked his youngest: "Harper, how are you feeling about the first day of school?"

Cutting a pear for her breakfast, Harper replied: "Nervous, but very excited," to which David pleaded to her: "Please don't go! Stay with daddy! Stay with me."

Victoria, 47, asked from behind the camera: "How is it putting on your school uniform after having over a month in shorts and T-shirts. How does it feel?"

Harper sweetly responded: "Not the best."

Victoria joked in the caption: "Is she leaving for school or leaving home? You'll be ok @davidbeckham," along with several crying with laughter emojis.

The famous family have spent some quality time at their Cotswold home since returning from sun-soaked Miami.

David and Victoria recently gave a glimpse inside their fun day at a Tidal Cove waterpark in Miami with their daughter Harper.

David and his daughter took to the Master Blaster, the world's first uphill waterslide, and the dad-of-four shared the footage to his 68.2million Instagram followers of the pair plummeting down the slide and into the pool.