Facing rising competition throughout the Indo-Pacific and reminded that its mission is to use “lethal force”, the Australian navy’s decision to hire a group of twerking dancers for the commissioning of a naval vessel was an unexpected choice. It seems the strategic “pivot” to regional tensions, so often cited in defence white papers, will also perhaps be accompanied by a step-ball-change and a few pirouettes.

In what was supposed to be a great military moment, the official launch of the HMAS Supply in Sydney last weekend was emphatically upstaged by a hip-hop routine from Sydney dance troupe 101 Doll Squadron. While the unison choreography didn’t have the same faultless precision of most military drills, the squad’s involvement was an apparent attempt by the navy to engage all parts of the local community in the day’s celebrations. 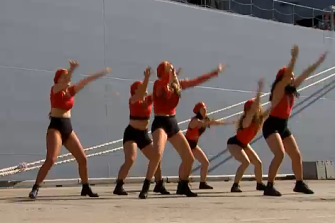 101 Doll Squadron performing at a navy event on the weekendCredit:ABC News

Take the country’s flagship dance company, The Australian Ballet, for example. These dancers regularly perform – without controversy – at high-level government events and diplomatic ceremonies. Abroad, the company has long been used as a tool of soft power, bankrolled and leveraged by Department of Foreign Affairs and Trade as an important expression of Australian culture.

In fact, the relationship between ballet and our national identity is so close that, in 2013, renowned choreographer Garry Stewart was commissioned to make a dance work for the company about the building of parliament house in Canberra. (It’s not clear whether the Sydney hip-hop troupe were asked to do the same for HMAS Supply.)

Championing ballet as a genre of dance worthy of national honour and export is, of course, part of a broader historical preference for the Western canon across all forms of Australian art. This ubiquity means more diverse expressions of movement – Indigenous, urban, folk and so on – are squeezed out of the national psyche and into the local community hall or the nightclub.

Urban dance, whether it features twerking or not, is a legitimate expression of cultural identity and celebration. If the ADF was truly seeking to represent the diverse community of Woolloomooloo where the Navy base is located, their decision to support a local group comprising Indigenous and other dancers of colour, was a commendable choice. It may even pave the way for more frequent programming of diverse artistic expression at national ceremonies. 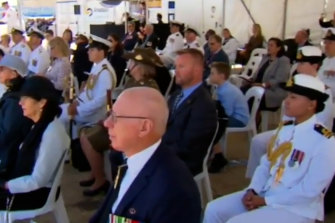 The ABC’s edited version of the event incorrectly suggested that Governor-General David Hurley was one of the dignatories watching the routine.Credit:ABC News

Responding to the performance, one government frontbencher, speaking to the ABC on the condition of anonymity, asked what Horatio Nelson would think. That a federal politician is concerned with the artistic appetite of a Napoleonic admiral from the eighteenth century speaks volumes of the monoculture that underpins our national identity.

More opportunities for diverse artistic expression like that given to the 101 Doll Squadron are needed. And with $270 billion being poured into our military’s expansion during the next decade, there may be many such opportunities to come.

Rhys Ryan is a performer and choreographer.