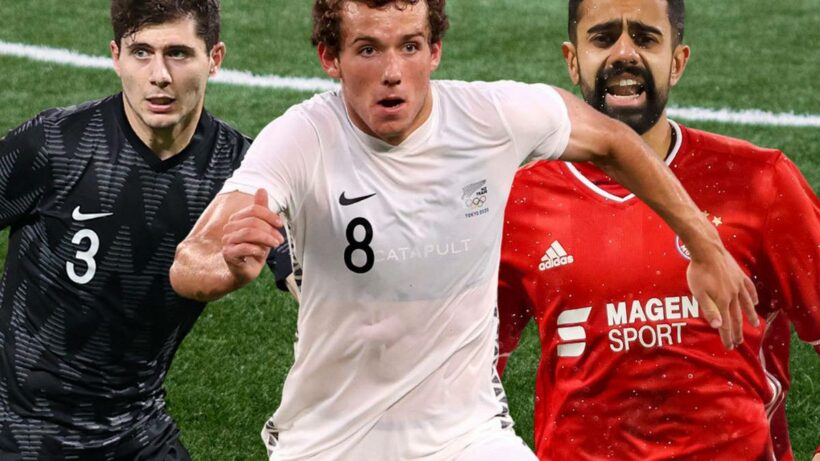 The All Whites are set to return to international action in October, having last played in November 2019. With the 2022 World Cup now just 15 months away, who’s in line for coach Danny Hay’s squad? Jason Pine updates the All Whites Power Rankings (previous position in brackets).

30. (21) Tommy Smith (Colchester, England)
Experienced centre-back who would still do a job for Hay in a white shirt.

29. (17) Alex Rufer (Wellington Phoenix, New Zealand)
Never lets any side he plays for down but is kept out of the top echelons here by others improving in similar roles.

27. (24) Noah Billingsley (Phoenix Rising, USA on loan from Minnesota United, USA)
Thriving in the US second-tier and a definite challenger to Payne and Ingham for the right-back role.

26. (New entry) Joey Champness (Giresunspor, Turkey)
Declared his allegiance to New Zealand by joining the Olympic squad. A skilful attacker who can now look to take the next step in his international career.

25. (19) Elliott Collier (Chicago Fire, USA)
Still the best like-for-like replacement for Wood but needs games and goals in the USA to push his claims.

24. (34) Nikko Boxall (SJK, Finland)
Playing every week in the Finnish top-flight and could well add to his three caps, pushing the likes of Tuiloma for his spot in the New Zealand squad.

23. (13) Stefan Marinovic (Nof Hagalil, Israel)
Usurped by Sail at the Phoenix and now in a tussle with him at international level, too. Huge experience and a positive force, regardless of his role in a squad.

22. (14) James McGarry (Wellington Phoenix, New Zealand)
Undoubted ability, but curiously unable to hold down the left-back spot at Wellington. The obvious back-up to Cacace, but needs to nail his position at club level.

21. (31) Dane Ingham (Newcastle Jets, Australia)
Able to play in both fullback positions, or even further forward. Still learning his trade in many respects, but well worth persevering with.

20. (48) Matt Garbett (Torino FC, Italy)
Went from a travelling reserve to starting player at the Olympics, earning a move to Italy. Must now be considered a genuine contender for the full New Zealand side.

18. (32) Marko Stamenic (FC Copenhagen, Denmark)
One of our new breed of technically assured footballers who impresses everyone who sees him play. Learning plenty at his prominent Danish club and set to wear the white shirt with real distinction for the foreseeable future.

16. (12) Marco Rojas (Melbourne Victory, Australia)
A forgettable last A-League season can hopefully become a distant memory with the rebuild happening at Victory. Like Barbarouses, he’s a certain squad selection, but no longer a guaranteed starter.

14. (26) Nando Pijnaker (Rio Ave, Portugal)
Showed enough in Tokyo to confirm he’s the heir apparent to Reid and Boxall in New Zealand’s central defence. Left-sided, strong in the air and able to confidently play out from the back.

13. (10) Kosta Barbarouses (Sydney FC, Australia)
Close to bringing up 50 caps and one of the A-League’s best attackers. Still makes any New Zealand squad but in a genuine battle now with the likes of Just and McCowatt for starting spots.

12. (11) Callum McCowatt (Helsingor, Denmark)
Part of a Kiwi double-act in Helsingor’s front third and scoring goals for fun, albeit against some occasionally friendly defences. The move to Europe has been a good one.

11. (9) Tim Payne (Wellington Phoenix, New Zealand)
A second successive solid campaign with Wellington (filling in at centre-back for most of it) showed just what sort of player he’s become. Combative, committed, versatile and with more than a hint of leadership about him. If Hay is picking his best 11 right now, he’s the right-back.

10. (15) Elijah Just (Helsingor, Denmark)
Has long appealed as a top-class attacker and looks right at home on the international stage, combining brilliantly with Cacace down New Zealand’s left in Japan. On a great run with his club side as they seek promotion to the Danish top-flight. Just 21, another with a big future.

9. (8) Michael Woud (Almere City, Netherlands)
Showed resilience and heart to bounce back from a horror night against Honduras in Tokyo, producing excellent showings in the two games that followed, not conceding in 210 minutes of open play. Edges his challengers as the No 1 number one.

8. (16) Gianni Stensness (Viking, Norway)
The big mover this time around. Following a stand-out season in defensive midfield for the Central Coast Mariners, he transitioned seamlessly into centre-back for the OlyWhites. Hay believes that’s his best role, and Viking were clearly impressed, too. Makes the best 11 as either DM if NZ plays four at the back, or CB in a back-three.

7. (5) Michael Boxall (Minnesota United, USA)
Now into his fifth season in the MLS and a rusted-on starter for his club side. At 33, he remains supremely fit and while injury ruled him out of Tokyo, he’ll fancy a crack at a World Cup to cap an excellent career.

6. (7) Sarpreet Singh (Regensburg, Germany, on loan from Bayern Munich, Germany)
Has put an unhappy loan spell at Nurnberg behind him and is now enjoying football and life again at his new club with goals and assists early in his time there. Arguably our best player technically, who will hopefully continue to deliver on his potential.

5. (4) Liberato Cacace (Sint-Truiden, Belgium)
Stunning goal against Honduras and solid performances in Tokyo showed just what the former Phoenix fullback is capable of. Belgium feels like a stepping stone to a top European league. Comfortably our premier left-back.

4. (6) Joe Bell (Viking, Norway)
What a player he’s become. Has gone from strength to strength in Norway with his consistency and technical ability now attracting serious interest from other European clubs. At 22, a future national captain who will feature near the top of this list for many years to come.

3. (2) Ryan Thomas (PSV Eindhoven, Netherlands)
Back from the injury which saw him ruled out of contention for the Olympic Games, and starting to get minutes again in the Dutch top flight. Still just 26, his best years for club and country lie ahead.

2. (3) Winston Reid (West Ham United, England)
His performances for the OlyWhites in Tokyo (and his injury-enforced absence during that tournament) showed just how immense a presence he is in New Zealand’s defence. A fit Reid is integral to World Cup qualification.