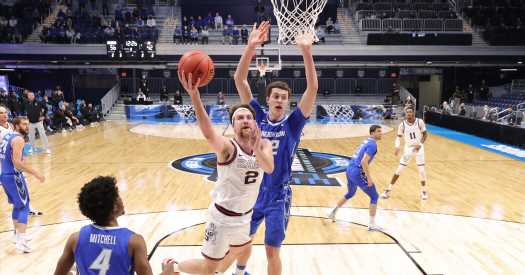 INDIANAPOLIS — Joel Ayayi, a junior guard from Bordeaux, France, with a sly grin and a silky jumper, fancies himself as l’enfant terrible of the Gonzaga men’s basketball team.

On a powerhouse squad where everyone knows his role — Corey Kispert is the deadeye shooter, Jalen Suggs the whirling dervish and Drew Timme the mustachioed wizard in the post — Ayayi rides along as the merry prankster.

He might knock on a hotel door and bolt down the hallway. He might tap a teammate on the right shoulder when he’s standing to his left, or jump out from behind a door to startle someone. He’s racking his brain to figure out what’s next.

If the antics seem childish, his teammates tolerate Ayayi because his pranks are about the only bothers they’ve endured this season. Certainly, there have been few on the basketball court this season the way they have waltzed through their schedule.

It was no different on Sunday, when the No. 1-seeded Zags cruised past No. 5-seeded Creighton, 83-65, at Hinkle Fieldhouse to earn a berth in the round of 8 against the winner of a Sunday night game between sixth-seeded Southern California and seventh-seeded Oregon. Gonzaga and the winner of that game will meet in the final of the West Region on Tuesday night at Lucas Oil Stadium.

Gonzaga (29-0), which is trying to become the first unbeaten men’s basketball national champion since Indiana in 1976, has had only one margin of victory smaller than 10 points this season. Its three tournament victories have come by 43, 16 and 18 points.

“We’re not hung up on the undefeated thing at all,” Gonzaga Coach Mark Few said, adding: “As you get farther and farther along with this, the pressure comes from a lot of places. I think the biggest place it comes from is you don’t want it to end. I bet if you asked them, they wish they could play 25 more games together. So you just don’t want it to end.”

Gonzaga played that way on Sunday. 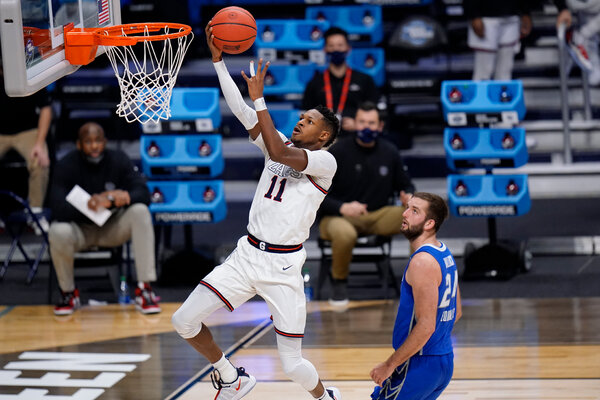 On an afternoon when Kispert was unusually quiet, attempting only one 3-pointer in the first 30 minutes, and Suggs committed six turnovers, the less-heralded starters joined Timme, the game-high scorer with 22 points, front and center.

Point guard Andrew Nembhard scored 17 points and had 8 assists, and Ayayi contributed 13 points and 8 rebounds. Their six 3-pointers combined were a retort to Creighton’s daring them to shoot. And it was also a platform to showcase the skills of Nembhard, a transfer who might be overlooked but was the first freshman at Florida since Bradley Beal to start every game.

Few repeatedly put Nembhard in pick-and-rolls with Timme, and sat back and watched him make one good decision after another, as the ball soon went whizzing around the court. Of Gonzaga’s 34 baskets, 23 came via an assist.

“If you make a mistake, they’re going to make you pay for it with the pass and create any easy opportunity for the teammates,” Creighton Coach Greg McDermott said last week, calling the Zags one of the best passing teams he has seen. “It’s one thing to be unselfish; it’s another thing to be unselfish and have the ability to deliver the pass on time and in the right spot.”

McDermott is no stranger to Gonzaga. This was the third time in the last four seasons they met. Creighton led each of the previous games by 7 at halftime, only to have Gonzaga put up 54 and 62 points in the second half to run away with victories.

There was no such drama on Sunday.

No matter the problem Gonzaga might confront, the answer is always more offense.

After Marcus Zegarowski sank a 3-pointer midway through the first half to draw Creighton within 27-25, the Bluejays just couldn’t keep pace. The Bulldogs’ lead was a comfortable 43-33 at halftime and got only larger as the ball zipped around the court with ruthless efficiency.

“That’s been our identity all season,” Nembhard said. “We play the best when we’re moving the ball because we have so many pieces and so much versatility. It’s just like playing in the park with a bunch of guys that click.”

The question over the next eight days, when the tournament concludes, is who will challenge Gonzaga?

Teams in its quarter of the bracket have been crippled by the coronavirus. Virginia Commonwealth was knocked out of the tournament by positive cases and could not play its first-round game against Oregon. Third-seeded Kansas and fourth-seeded Virginia were compromised by them leading up to the first round and bowed out early (though both had lost to Gonzaga early in the season).

Creighton also had its own disruptions this month when McDermott was suspended for telling his players after a loss to Xavier that “I need everybody to stay on the plantation,” a metaphor that conjured images of players as slaves. McDermott, who was suspended only after widespread outrage — including some from former Creighton players — was reinstated after missing one game and apologizing.

Creighton advanced to the Big East tournament championship but was routed by Georgetown. The Bluejays were nearly upset by No. 12-seed U.C. Santa Barbara in the first round of the N.C.A.A. tournament before racing past Ohio in the second round.

The Zags’ undoing has often been teams with length defensively and ones that force the Zags to defend. Texas Tech used that formula to knock off the Zags in the West Regional final in 2019, and Florida State upset them in 2018. Southern California has the height to bother Gonzaga at one end and Oregon has the quickness off the dribble to do so at the other end. But they are also not seeded to reach this point for a reason.

Few, though, pointed to all the upsets in this tournament.

“I hope people realize just how hard it is; it’s literally the hardest thing we do in our sport is advancing in this tournament,” said Few, a coach whose team is making it look easy.