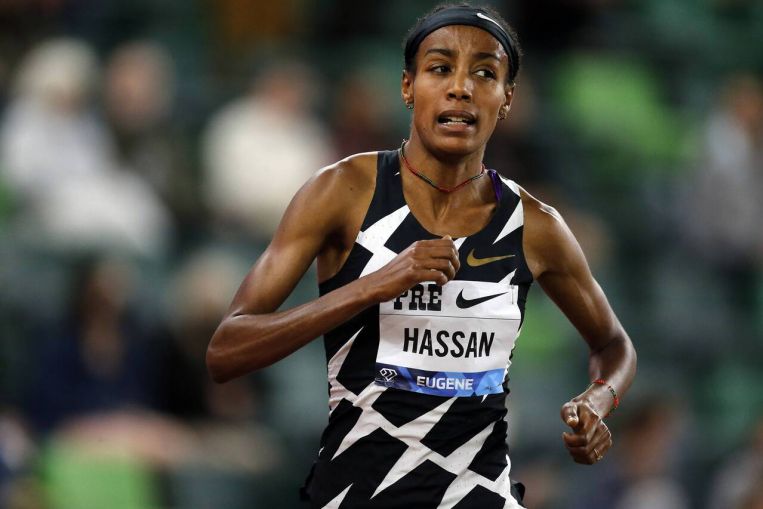 EUGENE, OREGON (AFP) – Double Olympic gold medallist Sifan Hassan came up short in a bid to set a world record in the 5,000 metres at the Prefontaine Classic on Friday (Aug 20), but she still managed to win comfortably in 14min 27.89sec.

The Dutch star Hassan, who won gold in the 5,000m and 10,000m at the Tokyo Games earlier this month, finished well ahead of runner-up Senbere Teferi of Ethiopia, who clocked 14:42.25 on the opening night of the two-day track meet at Hayward Field in Eugene, Oregon.

The organisers hyped Hassan’s attempted assault on the world record and she did run all alone for the last half of the race, beating Teferi by 14 seconds and bettering her Olympic winning time of 14:36.79. But it was more than five seconds off her personal best and she was nowhere near the world mark of 14:06.62 set by Ethiopia’s Letesenbet Gidey in October in Valencia, Spain.

She ran six races in Tokyo, also capturing a bronze in the 1,500m.

Gidey is in Eugene but decided not to run the 5,000 metres, choosing to compete in what turned out to be a blistering two mile (3.22km) race instead, where she finished second.

Burundi’s Francine Niyonsaba stormed to victory in 9:00.75, becoming the second fastest woman in the seldom-run event. Gidey, who took bronze in the 10,000m in Tokyo behind Hassan and Bahrain’s Kalkidan Gezahegne, who are both Ethiopian-born, clocked 9:06.74.

The meet continues on Saturday, when the women’s and men’s 100m races should provide the most compelling storylines of the weekend.