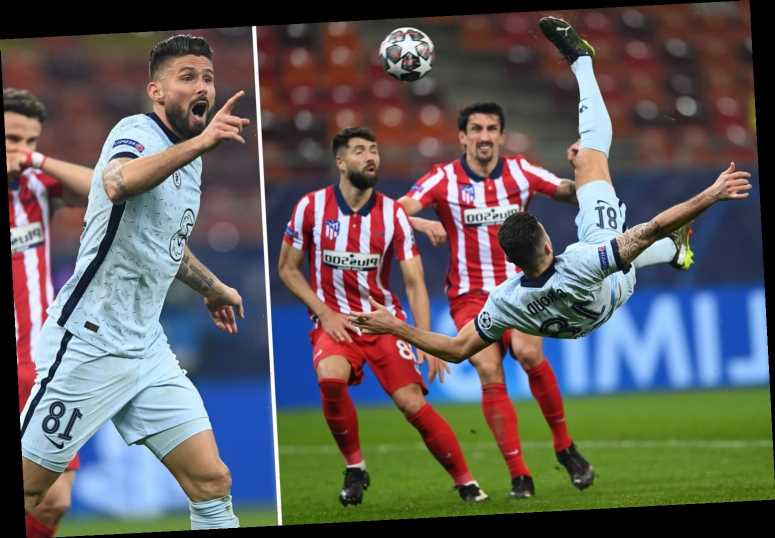 HE is not just a pretty face, Olivier Giroud – his finishing can be gorgeous too.

Thomas Tuchel, who has done a spot of male modelling himself, will
have fully appreciated the chiselled striker’s acrobatic strike, which
propelled Chelsea to within touching distance of a first Champions
League quarter-final in seven years. 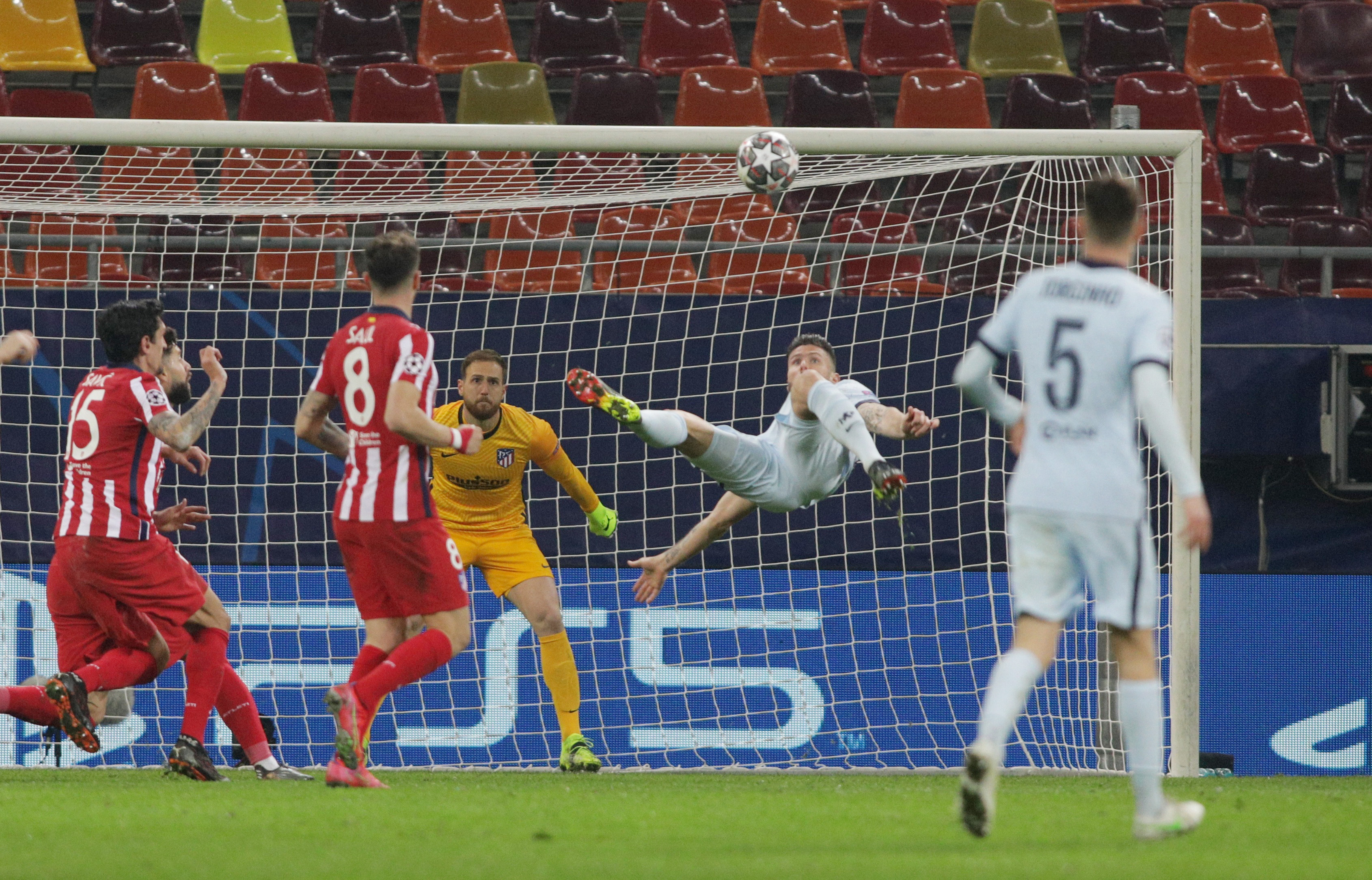 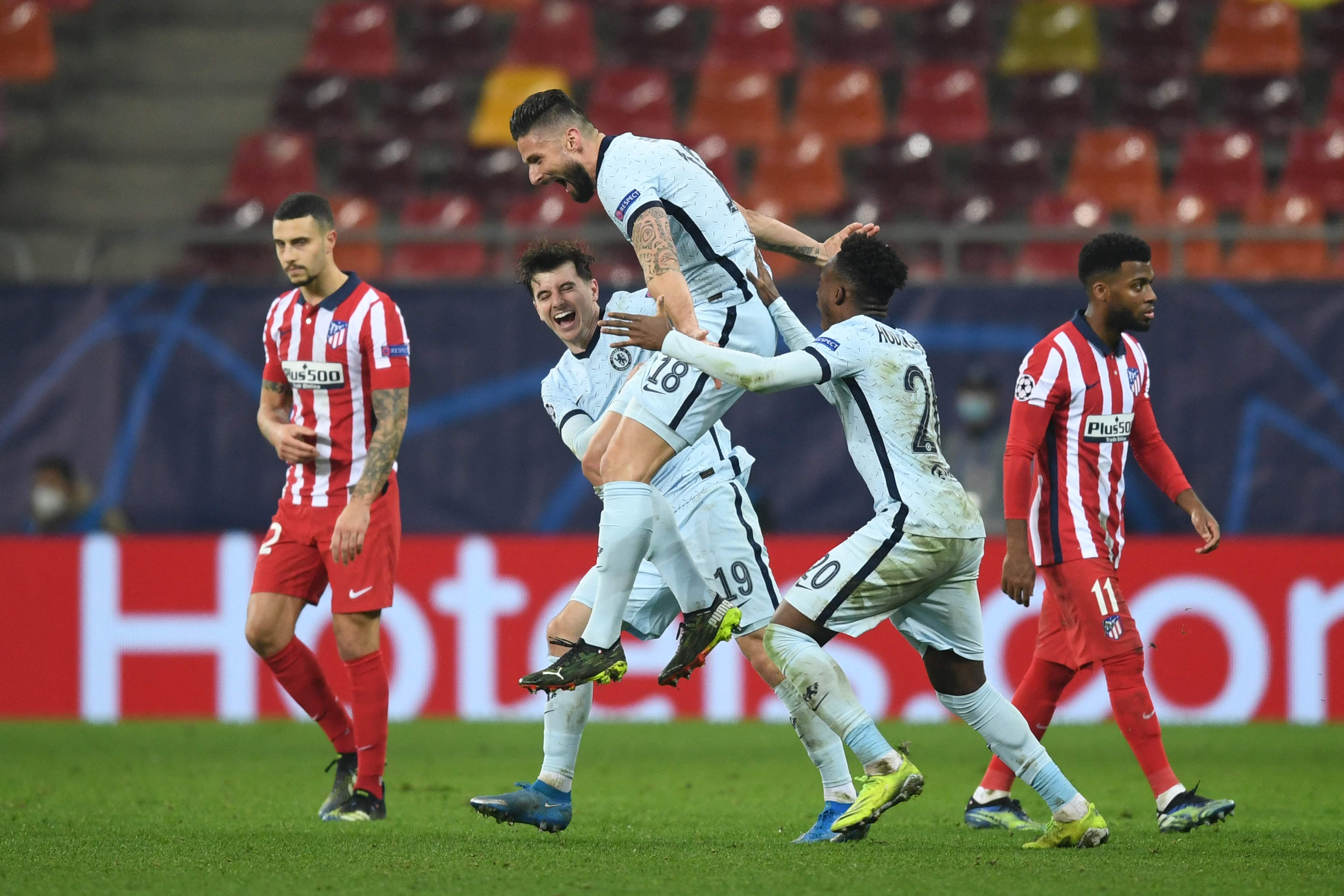 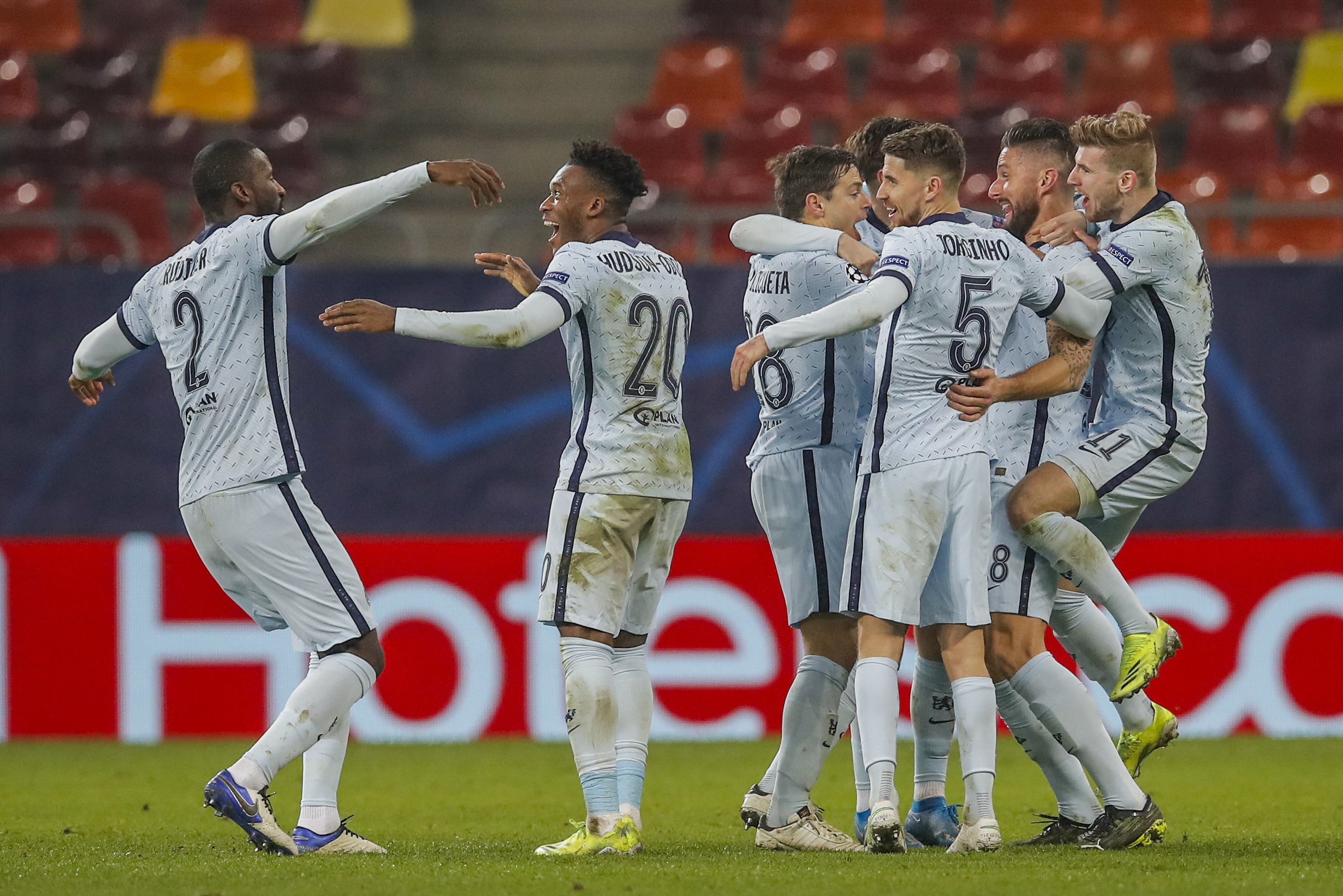 Giroud had to agonise for three long minutes before his bicycle kick
was awarded by VAR, having originally been chalked off for offside.

But it was well worth the wait as Tuchel extended his unbeaten run to
eight matches with a first-leg defeat of the La Liga leaders in
Bucharest.

This was his best result to date – and it was fully deserved as the
Blues, often naive under previous boss Frank Lampard, were more than a
match for the most streetwise team on the European block.

World Cup-winner Giroud has six Champions League goals this season and
the 34-year-old Frenchman’s experience earned a precious away goal –
which still count double in the event of a draw, even without home
advantage.

The second leg is scheduled for Stamford Bridge March 17 – but that is
still subject to a Covid-related change of venue.

Chelsea have not reached a quarter-final in this competition since
2014 – when they were eventually defeated by Atletico in the last
four.

But Tuchel led Paris St Germain to last summer’s final in a
breakthrough European campaign for the filthy-rich French club – and
he clearly has the tactical sharpness to make Chelsea serious
contenders in Europe’s elite club competition once more.

Diego Simeone’s men had suffered only their second La Liga defeat of
the season with a shock reverse against Levante and were still without
their England full-back Kieran Trippier, due to a ludicrous betting
ban. 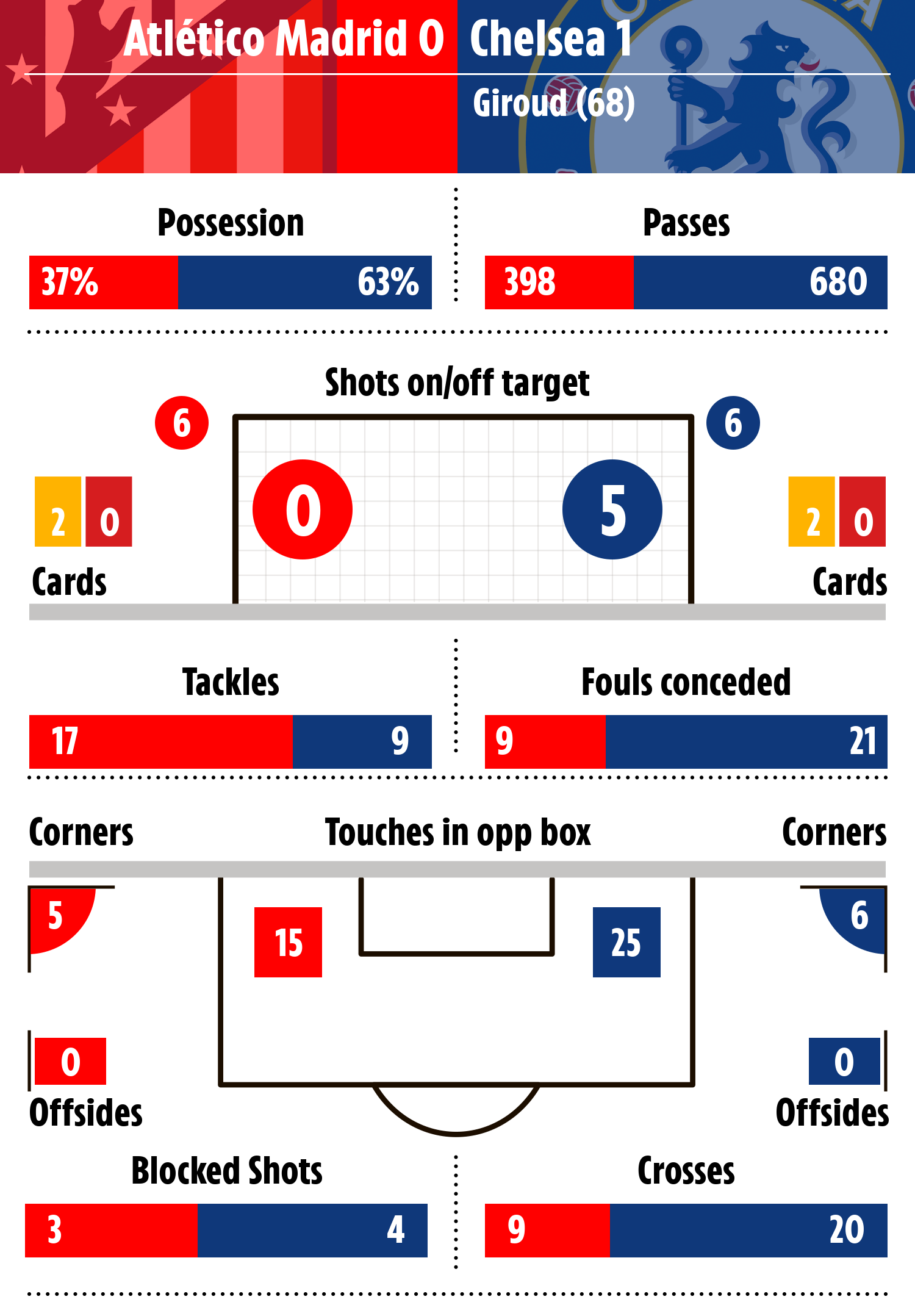 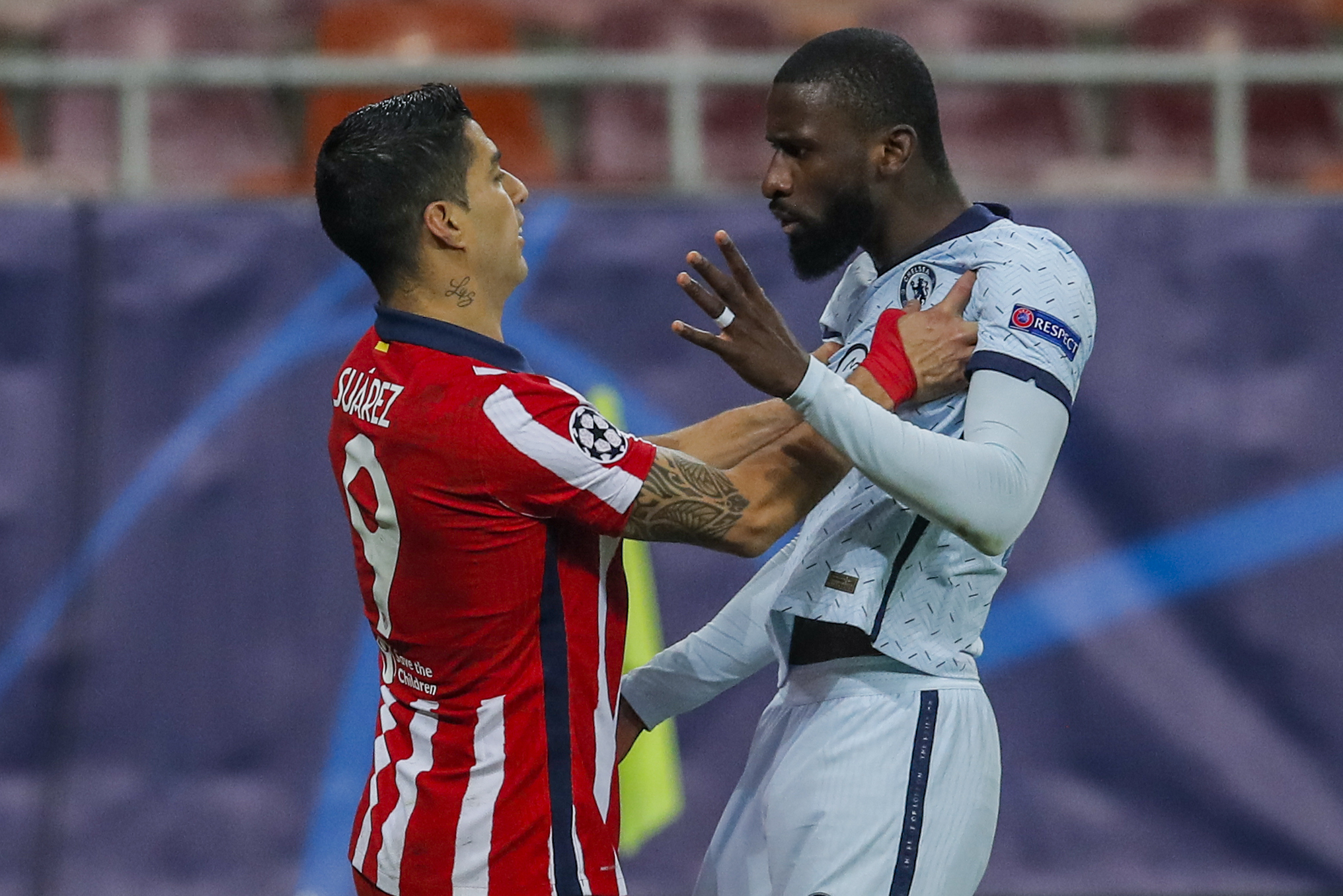 Tuchel’s Chelsea has been defensively stout but aside from a narrow
win at an off-colour Tottenham, there had been no serious tests before
this.

With Atletico, then Manchester United and Liverpool up next, it is
getting serious for the German now – and victory in neutral Bucharest
was an outstanding way to kick off such a series of red-letter
fixtures.

Tuchel started Callum Hudson-Odoi at wing-back after his bizarre
substitution at Southampton, half an hour after he’d come off the
bench.

And Hudson-Odoi responded with verve and vigour – linking up well with
fellow English youngster Mason Mount on several occasions.

It has been a shaky old start for Chelsea – Mount suffered a booking
that rules him out of the second leg and Edouard Mendy got away with
a horrible slip inside the opening two minutes.

Soon Antonio Rudiger was out-muscled and dispossessed by Luis Suarez
who centred across the face of the goal, with Thomas Lemar unable to
finish.

Yet Chelsea were soon passing, moving and probing for an opening.

Mount whistled one across Atletico’s goal, with Werner narrowly
failing to connect. 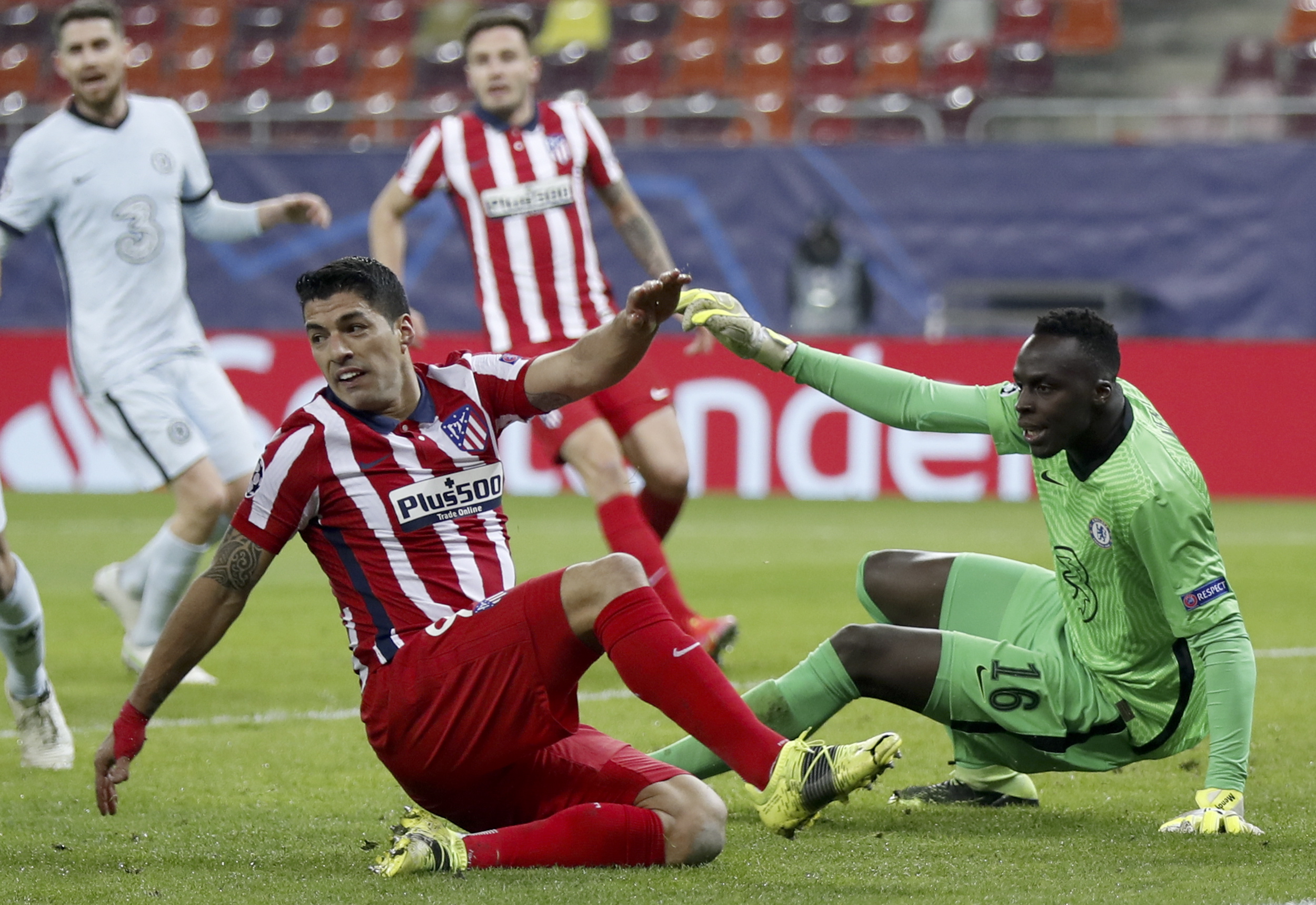 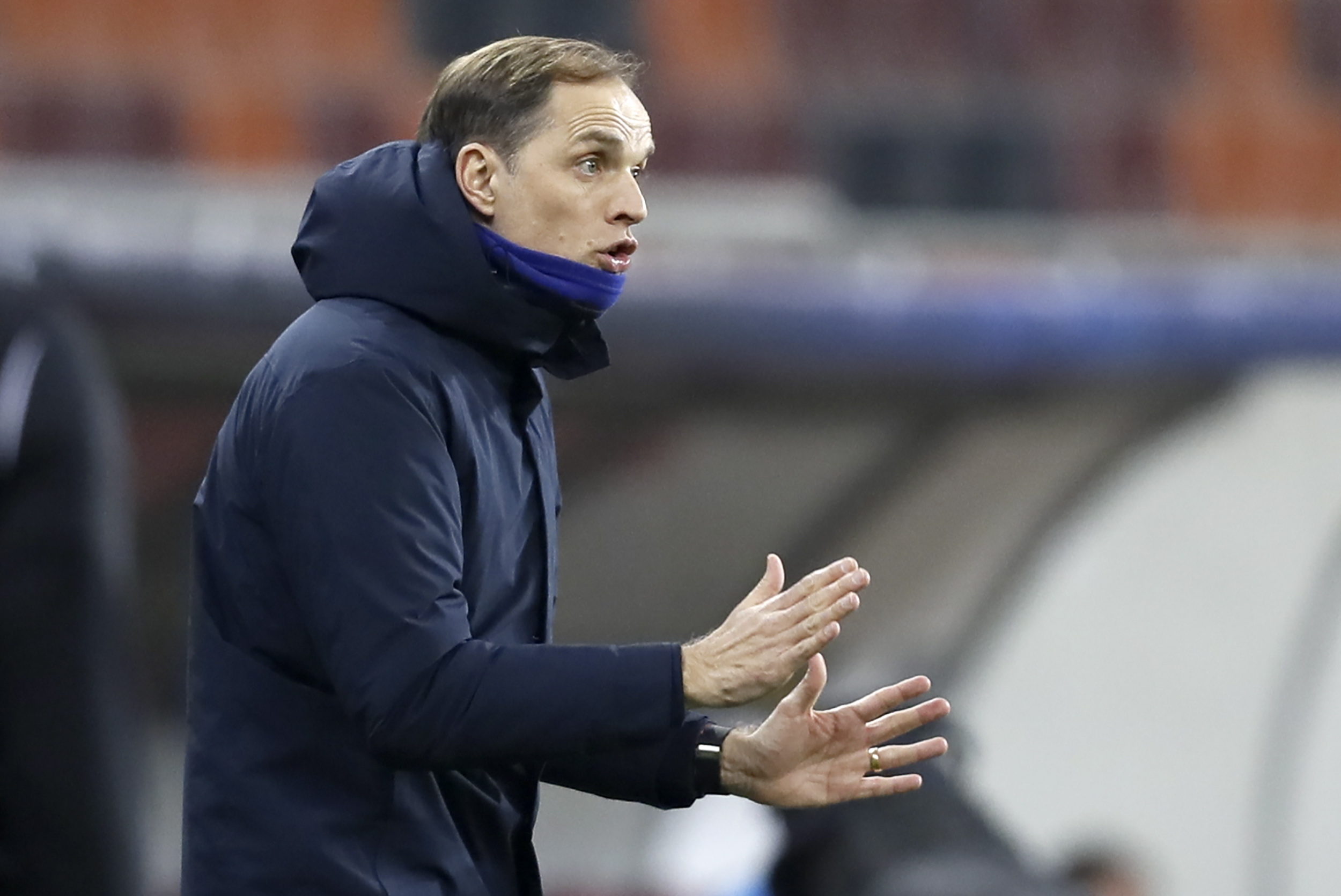 Timo Werner played a one-two with Giroud and tumbled in the box but
neither his fellow German, ref Felix Brych, or the VAR were impressed.

It was one of those typical Atletico performances – solid, stacked in
defence but hardly thrilling. They sat back, soaked it up and
thundered forward on the occasional counter-attack.

But their defence was finally pierced by a cute Mount pass which
released Werner, whose shot was pushed away at the near post by Jan
Oblak.

Marcos Alonso picked out Mount with a gorgeous curling cross but the
England man was unsure whether to shoot or cross and ended up doing
neither.

Still, this was promising stuff from the Blues – Hudson-Odoi and Mount
frequently linking up down the right and causing headaches for the
Spanish side.

Mount was in lively form, slipping past a couple of defenders and
sending Werner clear but the German getting funnelled wide. 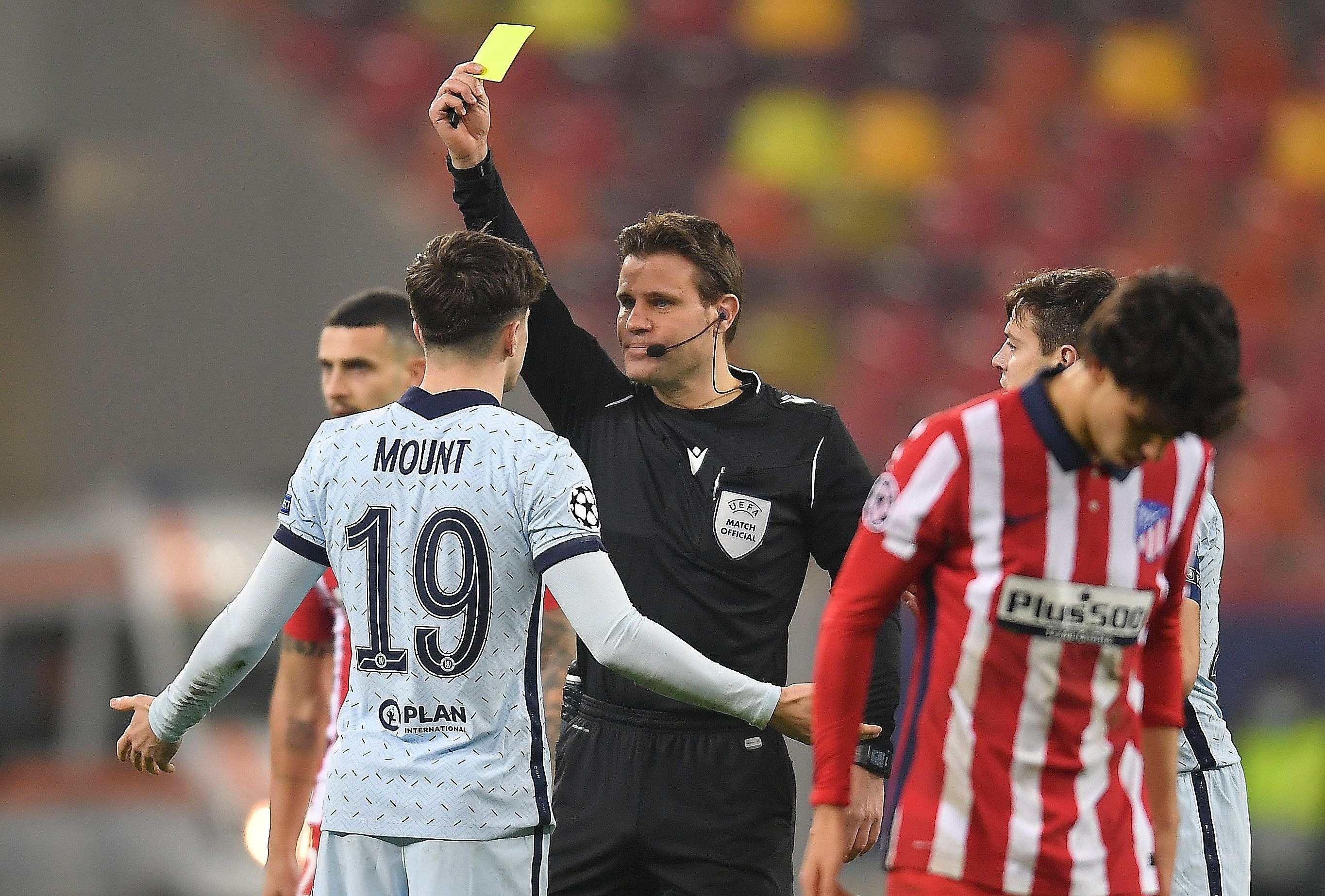 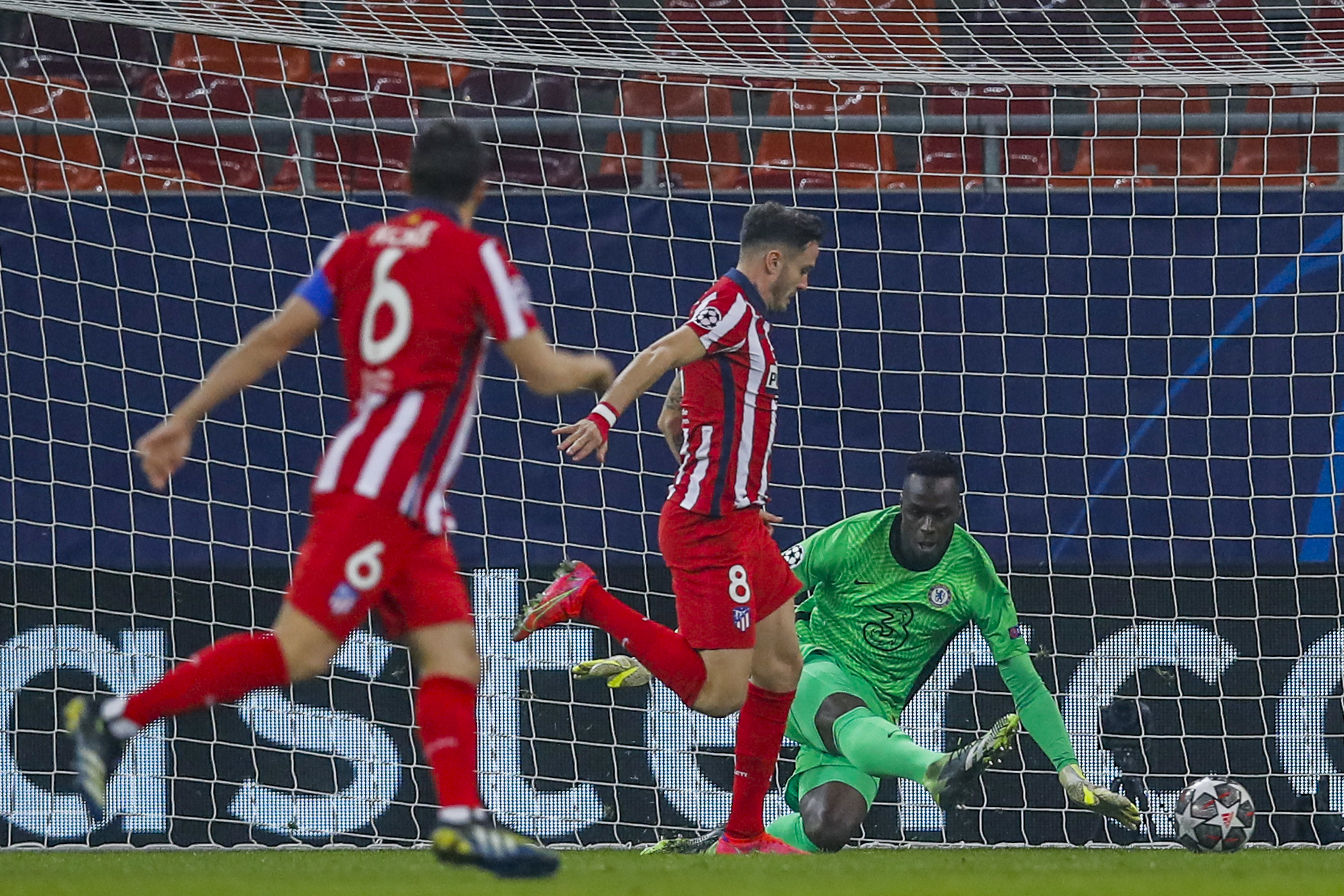 Joao Felix sent an acrobatic volley over the bar when Atletico broke swiftly.

Suarez was indulging in his usual histrionic villainy, diving and
bellyaching to his heart’s content.

But Jorginho was booked – and, like Mount, he will be suspended for the return.

Giroud’s moment arrived on 68 minutes – Mount appeared to have played
him through, so when the Frenchman unleashed his stunner, the linesman
flagged.

But after a tortuous wait, the remote official decided the last tough
had come off Atletico defender Hermoso – and Chelsea’s celebrations
lacked nothing in delirium for the delay.

‘Ansum’, as they say down at the Bridge. 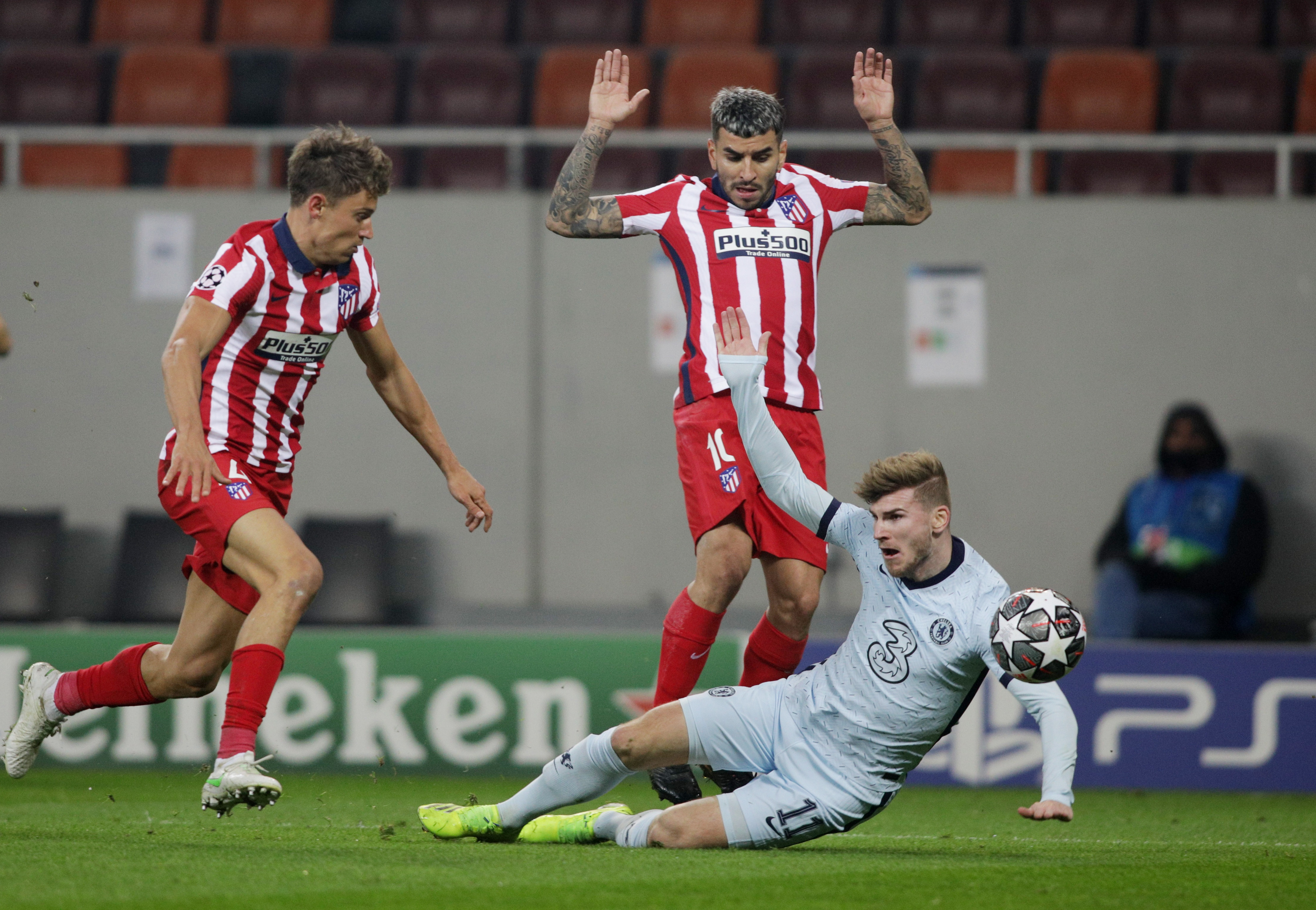 Giroud has been a European specialist for Chelsea over the last couple
of seasons.

Every time it has appeared as though his days with the Blues might be
numbered, he seems to pop up and produce something special on the
continent.

With so many of Europe’s superpowers at a low ebb right now, this
feels like a year when one of England’s contenders could have a
serious tilt at lifting Old Big Ears in Istanbul in May.

And with Tuchel at the helm, Chelsea have as good a chance as any of them.