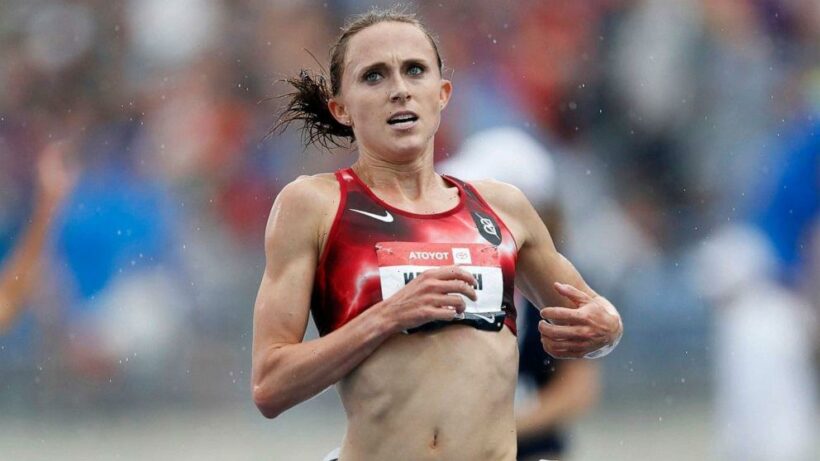 Just days before the U.S. Olympic track and field trials begin, Shelby Houlihan, the American record holder in the 1,500 and 5,000-meter runs, announced on Instagram that she has been banned for four years because of a positive test for the anabolic steroid nandrolone.

In the post, the 2016 Olympian said she was notified on Jan. 14 from the Athletics Integrity Unit, an independent body created by World Athletics that manages integrity issues in the sport, that a sample she provided on Dec. 15, 2020, came back as an “adverse analytical finding” for the steroid and she was subject to an immediate provisional suspension.

Houlihan said she had never heard of the drug and subsequently found out from the World Anti-Doping Agency that eating pork can lead to a false positive since certain types of pigs have a naturally high level of nandrolone, which a study published in Drug Testing and Analysis last year confirmed.

“In the following 5 days after being notified, I put together a food log of everything that I consumed the week of that December 15th test,” she wrote. “We concluded that the most likely explanation was a burrito purchased and consumed approximately 10 hours before that drug test from an authentic Mexican food truck that serves pig offal near my house in Beaverton, Oregon.”

She said despite studies showing her levels were consistent with subjects who tested positive in the same time frame and WADA guidelines requiring the lab to consider it, the lab that was used never considered the possibility.

Houlihan detailed that she spoke with experts, took a polygraph test and sent in a hair sample to a top toxicologist to prove her innocence.

“WADA agreed that test proved that there was no build-up of this substance in my body, which there would have been if I were taking it regularly,” she wrote.

Houlihan appealed the decision to the Court of Arbitration for Sport (CAS), citing her evidence, but on June 11, she said, her explanation was not accepted and she was suspended for four years.

“I feel completely devastated, lost, broken, angry, confused and betrayed by the very sport that I’ve loved and poured myself into just to see how good I was,” she wrote.

In a press release announcing Houlihan’s “anti-doping rule violation,” the CAS said she failed to establish the origin of the nandrolone, specifically 19-norandrosterone (19NA) and therefore is subject to a four-year period of ineligibility starting Jan. 14, 2021.

“The CAS Panel unanimously determined that Shelby Houlihan had failed, on the balance of probability, to establish the source of the prohibited substance,” according to the release.

Jerry Schumacher, Houlihan’s coach at Bowerman Track Club, defended her in a statement.

“Shelby was treated unfairly at every step of this process,” he wrote. “The AIU refused to charge her for months, despite no additional evidence being presented, opting to leave her in a provisionally suspended state until they were forced by Shelby’s legal team to charge her and agree to a hearing before the CAS so that Shelby could compete at the Olympic Trials. I believe if this had been USADA handling her case it would have been handled differently. At the very least, I’m confident she would have been treated fairly.”

Shalane Flanagan — former 10,000-meter Olympic silver medalist and Houlihan’s coach and former teammate — said cheating is not who Houlihan is.

“With every fiber of my being I know Shelby did not cheat and would never,” Flanagan said in a statement. “All Shelby has ever wanted to find out in every workout, every race is: How good can she be? We are living a nightmare that we can’t seem to wake up from and my concern is that if this tragedy can happen to us then it can happen to you: coaches and athletes.”

A number of teammates have also backed Houlihan on social media.

“I respect and support the fight to catch athletes who are cheating and doping, but taking down innocent athletes in the process is not a system I can stand for,” long distance runner Karissa Schweizer wrote.