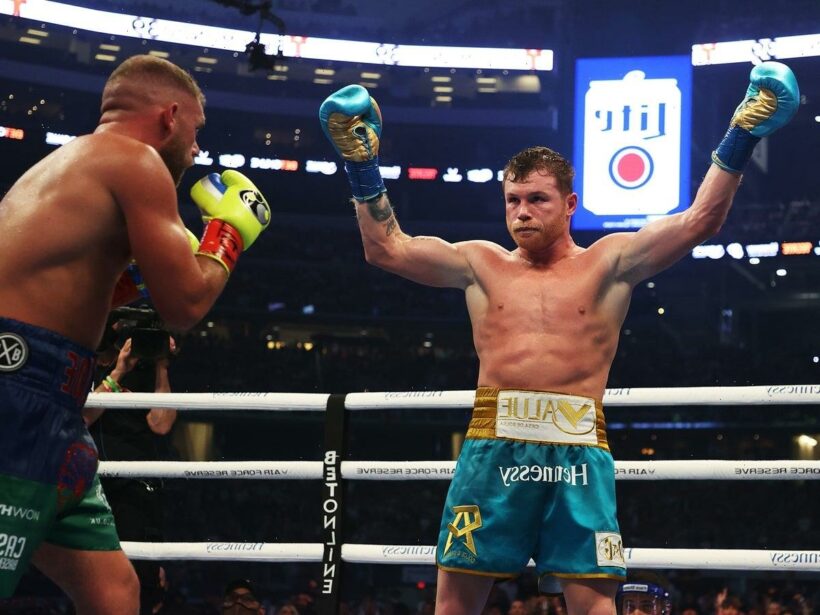 One slip, one mistake and just once punch was all Canelo Alvarez needed on Saturday night to break Billy Joe Saunders in front of 73,126 people in Texas.

The fight was finished in round eight the moment Saunders lunged, missed and was stuck in Alvarez’s lethal range; Saunders tried to turn his head away from the impact, but Alvarez connected with a sickening right uppercut, one of his beloved punches. A tiny mistake, a fraction of a second in real time, a lifetime in the ring. It was sweet science attached to the brutal old game.

Saunders held, grabbed, moved, ducked and survived to hear the sound of the bell to end the eighth round. And that took some guts. He was distressed, he had lost his composure, he was desperate, hurt and finally panic took over. The damage was done, the right eye closing, the water flowing in bitter tears and the red welt instantly alarming as he went back to the corner. Saunders was unbeaten in 30 fights, a world champion at two weights and he was just seconds away from being pulled out.

The moment the punch connected, Alvarez smiled and raised his fists to lead a chorus for slaughter inside the stadium. It was a chilling bit of heartless theatre, a reminder of all that is cold and nasty about Alvarez the fighter. Alvarez has lost just once in 58 fights, has won world titles at four weights and is boxing’s highest-paid and most in-demand fighter. In Mexico, he is the latest boxing idol.

Saunders looked like a truly broken man when he sat down in his corner at the end of the eighth round, his fate decided by just one punch and his eye socket clearly injured. He winced at the probing fingers of his trainer, Mark Tibbs, who gently touched the red and swelling damage. It was simply too much to stomach. Tibbs called it off, Saunders dropped his head under a wet, white towel. The surrender was complete and totally unavoidable. “Billy couldn’t see, Mark wouldn’t let him come out,” said Eddie Hearn, the promoter from Essex who set a new American indoor attendance record at the fight.

Alvarez was cold in triumph, Saunders barely able to touch gloves with him in the post-fight moments. There was no fake code of friendly conduct between the two fighters, no long, moving cuddle of respect, no intimacy of suffering shared and that somehow made the loss heavier. It felt indecent at the end. Saunders had talked a lot before the fight and Alvarez is not a man to forget. Alvarez is a serious man, his business demands it. Saunders was humbled in defeat, no wise-crack would heal the wound – the eye was only part of the loss.

“It was not as difficult as I expected,” Alvarez said. “I knew it would end that way. I broke his cheek.” By the way, nothing was lost in translation.

Saunders left the venue in an ambulance to get his eye examined in hospital. In the muted aftermath it transpired that two judges had scored it six rounds to two and the third had it five rounds to three – all in favour of Alvarez. The last score was the same as my total at the time it was correctly stopped.

The final punch made an irrelevancy of the numbers; many of the rounds were close, trickier to score than many people believe. However, it is established in American rings – even if everybody denies it – that the champion wins rounds if he throws heavier shots and comes forward. Canelo landed with the heavier punches, most of the lighter jabs Saunders threw were ignored by the three judges and, more importantly, by Canelo. There is a bleak boxing axiom that covers the dilemma: You have to take the title. Please, spare me the “scoring punches” argument.

Admittedly, Saunders had his WBO bauble in the shopping basket for the fight, next to Alvarez’s WBC and WBA versions, but Alvarez was the prize. Saunders was in the fight until the punch, but he was not winning and he would have not got the decision if the pattern had continued. That, in a business of few certainties, is a fact.

In Texas on Saturday night, behind a delirious wall of sound, boxing returned in all its glory, savagery, heartache and million-dollar might. Saunders was not good enough, but against Alvarez that is to be expected. Saunders will let his wound heal, collect his senses, bank his cash and search for the desire to fight again. Alvarez will continue to be king. It was just like the old days.