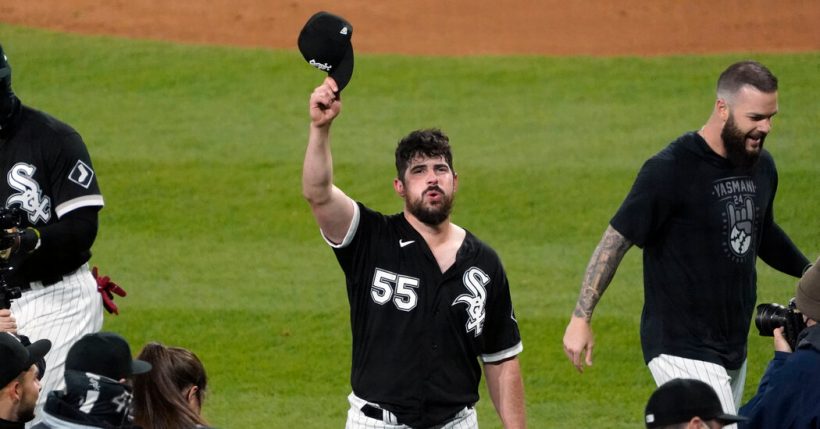 Carlos Rodon jumped around near the mound, surrounded by exuberant teammates. All the injuries, all the uncertainty, it seemed like a lifetime ago.

From no roster spot to no-hitter — Rodon had arrived at his moment.

The left-hander threw the second no-hitter of the young baseball season Wednesday night, losing his bid for a perfect game on a hit batter with one out in the ninth inning, and the Chicago White Sox cruised to an 8-0 victory over Cleveland.

The 28-year-old pitcher got some help from A.L. M.V.P. Jose Abreu, who picked up Josh Naylor’s slow bouncer leading off the ninth and got his toe on first base in the nick of time. The pandemic-limited crowd of 7,148, bundled up on a cool, crisp night, had to endure a quick replay review when the Indians challenged, but the call was upheld.

Rodon then plunked Roberto Perez on the back foot with an 0-2 slider — the only runner he allowed. An incredulous Rodon looked on almost in bewilderment as Perez made his way to first, asking the veteran catcher if the ball actually hit him.

It had. A perfect game saved by inches — then lost by a foot.

Rodon regained his composure in time to strike out Yu Chang looking and retire Jordan Luplow on a sharp grounder to third baseman Yoan Moncada, starting a joyous celebration. Rodon held out his arms as Moncada jumped toward him and backup catcher Zack Collins joined the impromptu party.

“That was the most incredible thing that I’ve ever been a part of behind the plate,” the 26-year-old Collins said.

Sidelined by a string of injuries throughout his career, Rodon was out of a job for a while last winter. Back in December, the White Sox declined to offer him a 2021 contract. The No. 3 pick in the 2014 amateur draft re-signed with the team as a free agent, agreeing to a one-year deal for $3 million on Feb. 1.

Looks like a pretty good call at the moment. Rodon (2-0) won a spot in the rotation in spring training and pitched five scoreless innings in his first start of the season. He was supposed to pitch Monday against Cleveland, but was scratched because of an upset stomach.

“There’s an old saying: ‘There’s not a lot of justice in this game, but every once in a while,’” Chicago manager Tony La Russa said.

“Proved to me he’s a finisher, and that’s a really good thing for his future and ours.”

It was the first no-hitter for the White Sox since Lucas Giolito pitched one Aug. 25 last year against Pittsburgh and the 20th in franchise history, second-most among major league teams behind the Dodgers (23).

Perez made two hard outs earlier in the game and said when he came up in the ninth, he was unaware Rodon had not permitted a base runner.

Rodon’s gem came only five days after Joe Musgrove threw a no-hitter for his hometown Padres at Texas — the first no-no in club history. San Diego had been the only big league franchise without one.

Working quickly in short sleeves with the top of his jersey unbuttoned, Rodon threw 75 of 114 pitches for strikes. He struck out seven in his first major league shutout and second complete game.

It was his first home win since pitching six effective innings for a 7-3 victory over Minnesota on Aug. 22, 2018.

The game-time temperature was 45 degrees, and most of the other players wore long sleeves. But the cold didn’t appear to bother Rodón at all.

He was in control right from the start. Franmil Reyes saw eight pitches leading off the fifth, but bounced to third on a 2-2 offering. The crowd cheered loudly when José Ramírez lined to left on a 3-1 pitch for the final out of the seventh.

“He kind of overwhelmed us,” Indians manager Terry Francona said. 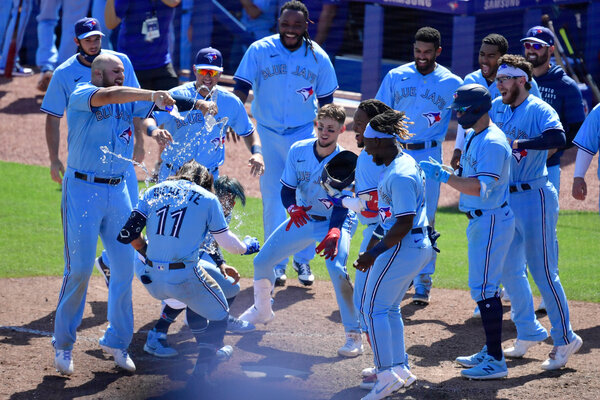 Bo Bichette matched the Yankees slugger Aaron Judge in the power department and got to take the final trot.

Bichette homered twice, including a game-ending drive to lead off the ninth inning that lifted the Toronto Blue Jays over the Yankees, 5-4, on Wednesday.

“I think I am just starting to heat up,” Bichette said. “I think I was grinding for a while. That’s part of baseball, you fight until you start feeling good. It’s good feeling now.”

Bichette drove a pitch from Chad Green (0-2) the opposite way to right-center field as Toronto took two of three games in the series.

Bichette tied his career high with an 11-game hitting streak. He had three hits and also stole a base.

Alejandro Kirk also homered for the Blue Jays. Rafael Dolis (1-0) worked the ninth to get the win.

Judge hit two home runs for the Yankees, who went 2-4 on a road trip. The Yankees also lost two of three at Tampa Bay.

“It’s the little things,” Judge said. “I looked back, it’s either baserunning mistakes, mistakes in the outfield, not coming up with just a clutch hit. There’s a bunch of things. For me personally, a couple things I need to work on to help put this team in a better position to come out with better outcomes.”

The Yankees scored 23 runs over the six games.

“Inconsistent,” Judge said. “That’s the word I keep coming back to. Not consistently having quality at-bats, put the ball in play when we need to, situational hitting.”

Toronto went 3-3 with one rainout in its first regular-season homestand at TD Ballpark, its spring training home.

The Blue Jays are playing their first three homestands through May in Florida because of Covid-19 restrictions in Canada. The team used Sahlen Field, its Class AAA stadium in Buffalo, as a home base last year and could return there later this season.

Peterson and McCann Team up to Beat Phillies

David Peterson matched a career high with 10 strikeouts in six dominant innings and catcher James McCann hit his first home run with the Mets, sending the team past the Philadelphia Phillies, 5-1, on Wednesday night for its third straight win.

McCann had three hits, including a two-run homer in the eighth. Brandon Nimmo and Dominic Smith also got three hits apiece, and Francisco Lindor scored twice.

Peterson (1-1) outpitched former Mets starter Zack Wheeler, allowing only two hits and rebounding nicely from a rough outing in Philadelphia last week. The second-year lefty solved the N.L. East rival Phillies after entering with a 16.50 E.R.A. in two career starts against them and a 2.64 E.R.A. in nine outings versus all other teams.

Three relievers finished a three-hitter for the Mets. Aaron Loup got five outs and Edwin Díaz fanned two in a perfect ninth against the meat of the Phillies’ order.

After starting the season 4-0, the slumping Phillies have dropped six of eight — including the first three games of this four-game set.

The Mets pounced early, scoring two runs against Wheeler in the first inning. The red-hot Nimmo got things started with a leadoff single against his former teammate, who needed 29 pitches to get through the first.

Lindor and Smith followed with back-to-back singles, scoring Nimmo. Lindor came in when Pete Alonso grounded into a double play.

General Manager James Click made the announcement on Wednesday, hours before the Astros were to wrap up a three-game series with the Detroit Tigers.

Click said he couldn’t say if a player had tested positive for the coronavirus or been exposed to someone who had and that the length of each player’s absence would be determined by contract testing that is being performed.

Click was asked if the situation could have caused the game to be postponed.

“We’ve been in close contact with Major League Baseball throughout the day about that possibility,” he said. “They don’t believe that there is a health-safety reason not to play. So as of now, we are playing the game.”

The Astros have lost four games in a row after a 6-1 start and now must play without four members of their starting lineup.

“It’s just a challenge for the rest of our guys to pick us up and get us back on the right track,” Click said. “We’ve obviously (struggled) a little bit in the past four games. When it rains, it pours. It’s a difficult situation but we can’t let that take our focus away from from winning this game.”