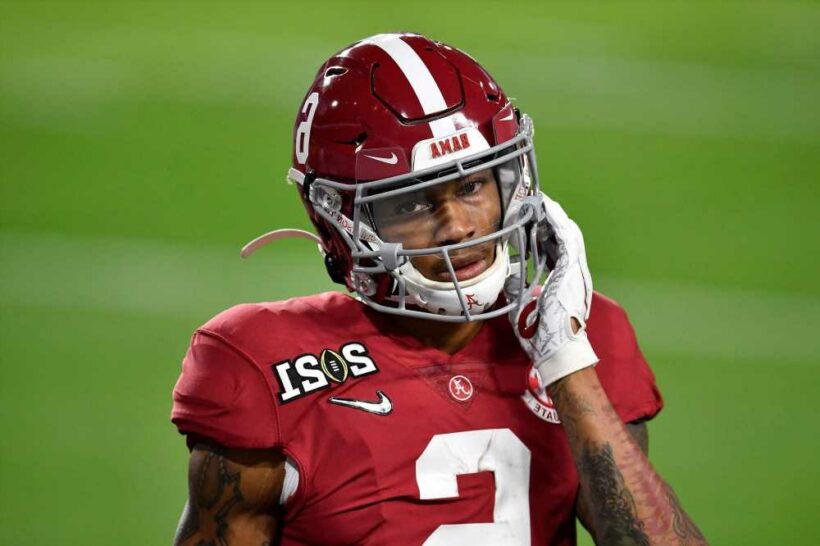 Giants trade back in NFL Draft after Eagles stunner

Heisman Trophy winner DeVonta Smith is now a member of the Eagles, but in the days leading up to the 2021 NFL Draft, the Alabama star thought he would be playing for one of their biggest rivals.

Smith appeared on Chris Long’s “Green Light” podcast and mentioned that there were two other teams he expected to be drafted by – the Giants and the Carolina Panthers.

“I thought Carolina was going to draft me,” Smith said. “That’s who I thought. I knew of course the Giants, but it was all about, you have to get to 11. I knew if I was there at 11, I was for sure going to the Giants.”

The Panthers made a bit of a surprise pick at No. 8 by drafting cornerback Jaycee Horn out of South Carolina. Once that happened, Smith knew that he had a maximum of three more picks left before he was taken.

However, the Eagles made another surprise move and jumped up two spots – ahead of the Giants – to take Smith. With the top two cornerbacks (Horn and Patrick Surtain) off the board, Philadelphia decided take a swing at Smith, stealing him from the Giants’ clutches by trading with another division rival in the Cowboys.

Smith previously said he was “shocked” the Eagles traded for him, and that it was a “blessing.”

With Smith off the board at No. 11, the Giants traded back with the Chicago Bears, who landed Ohio State quarterback Justin Fields. The Giants took Florida receiver Kadarius Toney at No. 20.