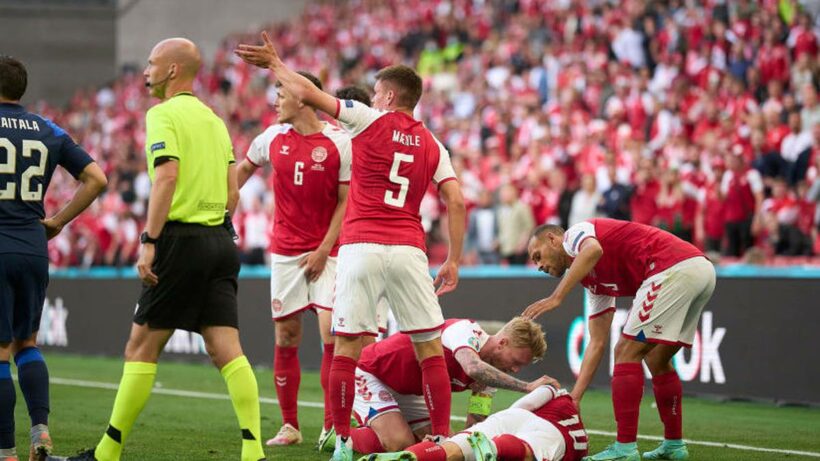 Denmark’s goalkeeper Kasper Schmeichel and striker Martin Braithwaite lamented that they had to choose whether to restart the Denmark-Finland Euro 2020 match while they were reeling from Christian Eriksen’s mid-game collapse.

“We were put in a position, that I personally feel that we shouldn’t have been put in,” Schmeichel told Danish media at a press event in Helsingor, north of Copenhagen.

“We had two options: Either come back the day after at noon or continue the game.”

The Leicester City goalkeeper said he wished someone more senior would’ve said “that it wasn’t the time to take that decision, and that we should maybe wait until the day after to decide”.

“What has happened has happened, and hopefully they’ll learn from this,” Schmeichel said, as he praised what he considered the real “heroes” of the game, the medics.

Barcelona striker Martin Braithwaite said the players would have “wanted a third option, because we didn’t want to play,” noting that the decision to resume the game was “not a wish”.

“It was one of the only possibilities we had, and we were told we should make a decision,” Braithwaite said.

“I actually saw an official quote from UEFA saying they were following the advice of the players – the players insisted on playing. I know that not to be the truth,” he told TV program Good Morning Britain.

“They were left with three options. One was to play immediately and get the last 50 minutes played. The next one was to come in (the day after) at 12 noon and finish the 50 minutes. And the third option was to forfeit the game and lose 3-0.

“So, work it out for yourself. Is it the players’ wish to play? Did they have any choice really? I don’t think they had.”

In a statement responding to the allegations, UEFA said it “treated the matter with utmost respect for the sensitive situation and for the players”.

“It was decided to restart the match only after the two teams requested to finish the game on the same evening,” UEFA added.

“The players’ need for 48 hours’ rest between matches eliminated other options.”

The comments from Danish players mark the first time since Eriksen’s dramatic collapse and cardiac arrest on Sunday (AEST) in the game against Finland that his teammates have spoken to the press.

The players were able to talk to Eriksen via a video call on Monday, and he was also visited in the hospital by Kasper Schmeichel.

“He said in his own way that we should look forward to the game on Thursday [against Belgium]. It meant a lot,” midfielder Pierre-Emile Hojbjerg, who missed a penalty against Finland after the restart, told Danish media.

“He was gone, and we did cardiac resuscitation,” doctor Morten Boesen told a press conference. “How close were we? I don’t know. We got him back after one defib [defibrillation], so that’s quite fast.”

Eriksen’s agent Martin Schoots said Eriksen had been lifted by “all the love around him”. “Messages have arrived from all over the world,” he said. “And he was especially touched by those from Inter (Milan), not only from his teammates, but also the fans.

“Half the planet has been in touch with us, everyone is worried.

“Now, he must simply rest. His wife and parents are with him.”

Schoots said the player would remain under observation in hospital until at least Tuesday.