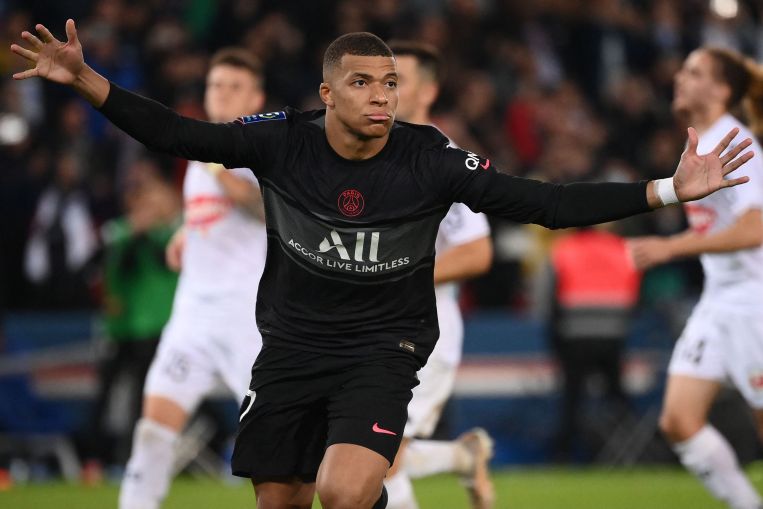 PARIS (AFP) – Kylian Mbappe converted a soft late VAR penalty award to give a Paris Saint-Germain side missing Lionel Messi and Neymar a 2-1 win over Angers in the French Ligue 1 on Friday (Oct 15).

PSG had to come from behind, with Danilo Pereira heading in the equaliser midway through the second half after Angelo Fulgini had given the away side the lead at the Parc des Princes.

Mbappe then finished emphatically from the spot with three minutes left after Angers defender Pierrick Capelle had been penalised for a handball only seen by the referee following a review of the images.

Beaten at Rennes in their last game before the international break, Mauricio Pochettino’s PSG side have now won nine of their 10 Ligue 1 outings this season and are nine points clear of second-placed Lens.

The victory, which PSG will say was deserved on the overall balance of play, came without their South American stars, who were in World Cup qualifying action across the Atlantic less than 24 hours earlier.

Messi, Angel di Maria and Leandro Paredes all played in Argentina’s 1-0 win over Peru in Buenos Aires, while Neymar scored and Marquinhos was an unused substitute as Brazil crushed Uruguay 4-1 in the Amazonian city of Manaus.

“We were without 80 to 90 per cent of our players during the international break, but the players who haven’t played much put in a great effort and it’s a great three points,” said Pochettino, who was grateful for the presence of Mbappe.

“We know Kylian is a great player, one of the best in the world, and he shows up when the team needs him.”

PSG will hope to have their South American contingent back for their home Champions League clash with RB Leipzig on Tuesday, but against Angers a much-changed team nearly paid the price for a lethargic start.

Pochettino made seven changes, with the likes of Colin Dagba and Rafinha getting rare starts, and it was Angers who took the lead nine minutes before half-time.

The visitors, who had lost just once this season prior to this game and sat fourth in the table, broke forward quickly and Sofiane Boufal’s superb low ball from the right was turned in at the back post by Fulgini.

Ander Herrera had a goal ruled out for offside for the home side just before the break, and after the restart it was Mbappe who inevitably dug PSG out of a hole.

Fresh from scoring France’s winner in last weekend’s Uefa Nations League final against Spain, Mbappe set up the 69th-minute leveller as his delightful clipped cross from the right was nodded in from close range by Pereira.

With seven minutes left, Mbappe sprinted for the byeline and cut back a cross for Mauro Icardi, whose header was weak and was deflected into the arms of Angers goalkeeper Paul Bernardoni.

However a Video Assistant Referee review showed the ball, while initially heading off target, was taken towards the goal by a touch off the arm of Capelle.

The referee pointed to the spot and Mbappe gladly took the chance to win the game with his fifth league goal of the season, but it was a bitter pill for the away team to swallow.

“There is no shame in losing here but not like that, it’s just not possible,” angry Angers defender Romain Thomas told Amazon Prime.