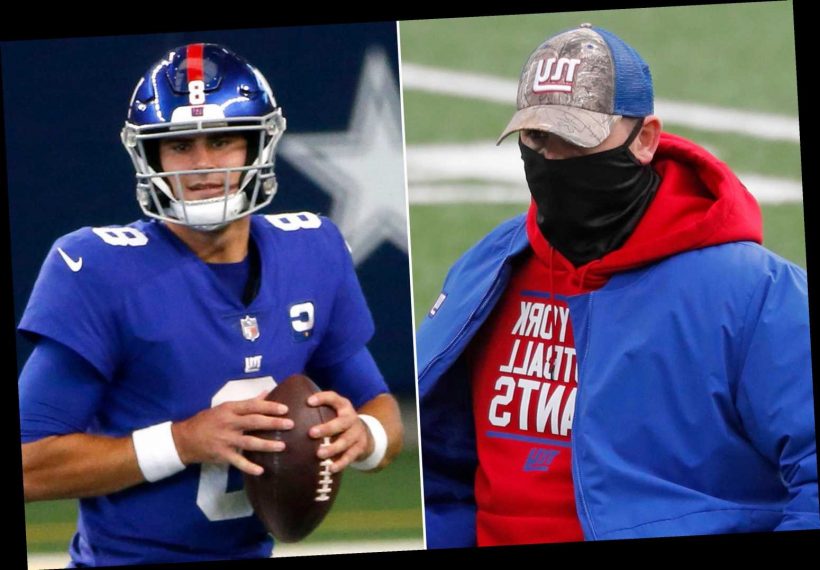 Justin Fields' moxie gives Jets, NFL a lot to think about before draft

After all the losing you and your New York Football Giants have endured since the infamous Boat Trip that preceded the playoff disaster in Green Bay in January 2017, the Eli Manning benching, the Ben McAdoo firing, the Jerry Reese firing, the Pat Shurmur firing, the Manning retirement, a 12-36 record over the previous three seasons, the cruel football gods relented and presented you with a totally unexpected gift at the start of a New Year:

A chance to, at the very least, put the Cowboys out of their misery Sunday at 1 p.m. at MetLife Stadium.

A chance for you to root for the Eagles hours later on Sunday night to defeat Washington, so your Giants earn the right to host a playoff game for the first time since Jan. 8, 2012 — when they faced the Falcons en route to Super Bowl XLVI.

So let the cynics laugh at your team, mock your 5-10 Joe Judge-Daniel Jones Giants for being blessed with a Blue-or-die Sunday against the Cowboys at StillLife Stadium simply because they toil in the NFC Least.

Let the sarcastic grinches call your Joe Judge-Daniel Jones Giants the worst playoff team in history if 6-10 gets you in.

The playoff rules have not changed: 6-10 becomes 0-0 when the tournament begins.

And in a season when COVID-19’s game-day roster treachery lurks ominously in every corner of the NFL universe — see Giants offensive line coach Dave DeGuglielmo — never could “any given January Sunday” become more relevant.

Pete Carroll was in his maiden season with the Seahawks when they beat the Rams in the 2010 regular-season finale, with backup quarterback Charlie Whitehurst filling in for Matt Hasselbeck (hip), to finish 7-9 and earn a wild-card berth.

“We didn’t get here the way we all dreamed of getting here, but we got here,” Carroll said afterward. “When it came down to it, the guys played a great football game tonight.”

And guess what? The Seahawks shocked the defending Super Bowl champion Saints, 41-36, at home in a wild-card game.

“I know it sounds crazy,” Carroll said after Hasselbeck had thrown four touchdown passes and Marshawn Lynch had broken nine tackles on a 67-yard TD run, “but we expected to win, and so we will take this in our stride and move to the next one.”

The 2014 Panthers, you ask? They punched their ticket to the dance with a 34-3 blowout of the Falcons on the road to finish 7-8-1 and on a four-game winning streak.

Then the Panthers beat the Ryan Lindley Cardinals, 27-16, at home in the wild-card game.

The sharks were eaten in a 31-17 road loss to the Seahawks in the divisional round, but hey …

The difference is the Giants do not hold destiny in their own hands. A victory over the Cowboys would still require Washington and Rivera, in his first season coaching for Daniel Snyder, losing to the Eagles at the Linc.

The Giants could win the division and plummet from a top-10 draft pick to 19th — if they are one-and-done in the playoffs.

There would, of course, be no Giants fans in the MetLife stands for any wild-card game, but this is no occasion for them to root for the higher draft pick.

Ereck Flowers was a ninth pick. Eli Apple was a 10th pick.

There is no Trevor Lawrence waiting for you at the end of the rainbow anyway.

And besides … do you really want to lose to the Jerry Jones Cowboys for the eighth straight time?

And besides: Do you really want your Giants to lose to the Cowboys on Eli Manning’s 40th birthday? Giants fans: Together, Blue-or-die.