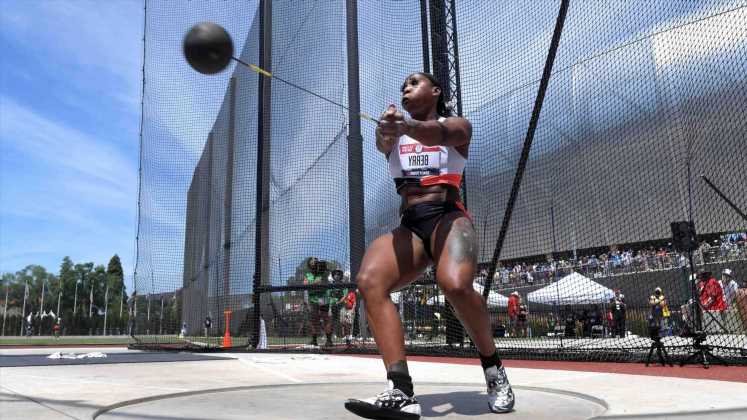 EUGENE, Ore. — There's a certain routine for the top-three finishers in an event at the U.S. Olympic track and field trials, after they secure their spots on Team USA. They're handed an American flag and a bouquet of flowers. They stand on the podium. They take some pictures. Then they take a victory lap around Hayward Field, to cheers from the crowd.

Gwendolyn Berry knew what to expect Saturday evening, after she placed third in the hammer throw. But she did not expect that, as she stood on the podium before taking pictures, organizers would play The Star-Spangled Banner.

"I feel like it was a setup. I feel like they did that on purpose," Berry said. "And I was pissed, to be honest."

Berry, 31, has previously protested while on the podium at an international sporting event and become a strong advocate of athletes using their platforms to speak about issues that matter to them. As the national anthem played, she turned away from the American flag, toward the southern seats at Hayward Field. Then she draped a T-shirt that read "Activist Athlete" over her head.

"It was funny because they said they were going to play (the anthem) before we actually walked out, and then it just so happened that they played it when we were out there," Berry said. "So, you know, it's OK. I really don't want to talk about the anthem because that's not important. The anthem don't speak for me. It never has."

In response to a request for comment from USA TODAY Sports, USA Track & Field managing director of communications Susan Hazzard wrote in an email that the national anthem was scheduled to play at 5:20 p.m. local time.

"We didn’t wait until the athletes were on the podium for the hammer throw awards, he national anthem is played every day according to a previously published schedule," Hazzard wrote. "We’re thrilled with the women’s hammer throw team that selected themselves for the Games."

Berry secured a spot on her second consecutive Olympic team with a throw of 241 feet, 2 inches. DeAnna Price won the event and set a new American and meet record with her best throw of 263 feet, 6 inches.

While the International Olympic Committee prohibits protests and demonstrations on the field of play under Rule 50 of the Olympic charter, the U.S. Olympic and Paralympic Committee altered its rules for the Olympic trials to permit protests – a significant departure from previous policy.

In 2019, the USOPC reprimanded Berry – as well as fencer Race Imboden – for their demonstrations on the podium at the Pan-American Games. Berry, who won gold, raised her fist during the playing of The Star-Spangled Banner.

In the years since, Berry has continued to draw attention to racial inequality and police brutality in America, while also pushing for athletes to have the right to speak up for issues that are important to them while at competition.

"There are a lot of things that are going on in this world that are bigger than sport," Berry said Thursday. "And I just want everybody to understand that as athletes, we can use our voices – we should use our voices – to bring awareness to these issues that impact our communities."

When asked if she has specific plans for demonstrations in Tokyo, Berry said she's not sure yet – but she'll certainly do something.

"Sports is entertainment. But my purpose and my voice and my mission is bigger than the sport," Berry said. "So me being able to represent my communities and my people, and those who have died at the hands of police brutality, those who have died (due) to this systemic racism – I feel like that's the important part. That's why I'm going, and that's why I was here today."