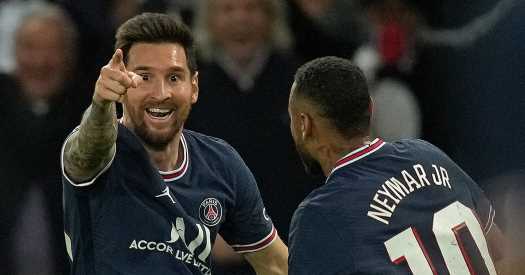 PARIS — Lionel Messi picked the ball up in that spot, the one that has served as the starting point for so many of his finest moments, the one that he knows so well that it might as well be his spot. It has, for 15 years, been his base camp, his happy place: a few yards inside from the right touchline, a few yards from halfway.

He was standing still as he controlled it. He had been standing still for some time, by that stage. Paris St.-Germain had taken an early lead, through Idrissa Gueye, and had spent most of the rest of the game desperately trying to fend off Manchester City’s unrelenting attacks.

It had maintained its advantage a little through judgment — the industry of Gueye and Ander Herrera, the obduracy of Marquinhos, the sheer, indomitable size and improbable elasticity of Gianluigi Donnarumma — and a little through luck. City cut through, again and again, only for P.S.G. to repel the incursions at the last possible moment.

As City, the Premier League champion, turned the screw, the forward line that acts as P.S.G.’s crown jewel seemed to lose interest. At first, both Neymar and Kylian Mbappé had lent a hand, dutifully following their runners, doggedly helping out their fullbacks. Even Messi, in the first half-hour or so, had made a point of hurrying and harrying his opponents.

The longer the game wore on, though, the more sporadic those efforts became. That has always been the question with this iteration of P.S.G., of course: For all its formidable talent, how can a team built around three superstars — three players who, on most sides, would have other players to do the dirty work for them — thrive against the well-oiled machines that, for the most part, dominate modern soccer?

In one sense, City and P.S.G. are mirror images. Both have been designed almost from scratch. Both are fueled by the bottomless wealth of Gulf States. Both stand for projects that see soccer as a means in some greater game, not as an end in itself. And both have been constructed as platforms for and monuments to individuals.

The only differences, really, are that the individuals at the heart of the P.S.G. project run around on the field while City’s issues instructions from the side, and that City’s approach dovetails more neatly with the exigencies of the elite game: The system crafted by Pep Guardiola is king, and his billion-dollar squad must submit to it. At P.S.G., the system is secondary to the stars.

As Tuesday’s game wore on, it felt as if that would be the lesson to be drawn. City had the ball. P.S.G. chased shadows. Or, rather, most of P.S.G.’s players did. Gueye and Herrera and the indefatigable Marco Verratti closed down spaces and put out fires. Increasingly, Messi and Neymar and Mbappé ambled around, no longer willing to chase back. A tenet of modern soccer said that the host’s luck could not last.

Then Messi got the ball. He has to work through the gears just a little these days, so he gathered speed as he approached City’s penalty area, drifting just a touch more to the center with every step, as if drawn to the edge of the box by the gravity of the goal itself.

It is here that Messi has always come to life. He was at full speed, but there was no sense of haste; it seemed he was waiting for all of the other moving parts of the scene to be just so before he played his hand. He saw Achraf Hakimi bursting down the right, unbalancing City’s shape. He saw Mbappé burst across the box at an angle. He waited.

When Messi signed with P.S.G., it was the prospect of seeing him play alongside Neymar — for so long his heir apparent — and Mbappé, the player most likely to inherit his crown as the best player in the world, that made the whole thing palatable.

He did not, after all, want to leave Barcelona: He made that perfectly clear. The greatest player of his, or perhaps any, generation had been forced to leave only because of the suicidal economics of the modern game. When it emerged that Barcelona could no longer pay him, he had little choice but to sign for one of two clubs.

Only P.S.G. and City, the two teams for whom money is no object, the two teams who have done so much to distort soccer’s economics, the two teams backed by nation states using the world’s most popular sport as a geopolitical pawn, could afford him. There was no romance here; it was cold, heartless business, nothing more.

The chemistry has not been immediate. Mbappé and Neymar, occasionally, seem to butt heads, one complaining that the other does not share the ball quite as much as he might. Messi’s start had been slow, too, as he recovered from a delayed preseason. Even the Harlem Globetrotters, after all, have to practice their tricks.

For much of this game, too, the P.S.G. trio seemed to be getting to know one another. They combined fitfully, in bursts, flickering to life and then subsiding again. It was possible to wonder if this grand experiment, this faintly pubescent attempt to bring FIFA Ultimate Team to life might be doomed to failure.

On the edge of the box, Messi finally released the ball. There is a clairvoyant streak to Messi’s genius: It is not just that he seems to see the field from on high, a shifting geometric pattern playing out beneath him, but that he gives the impression he can see into the future, too. So when he finally released the ball, it came with instructions. He did not so much pass it to Mbappé as loan it to him. His teammate had little choice but to give it back.

Messi did not, perhaps, know quite how Mbappé would do it — the slick back-heel that wrong-footed City’s defenders was a virtuoso testament to the French striker’s own brilliance — but he knew that, if Mbappé did return the ball, it would roll to his other favorite spot: on the arc just outside the box.

With Aymeric Laporte snapping at his heels, the ball arrived just as Messi did. There was no time to take a touch, but Messi has never needed time, not here. He swept his left foot through the ball, a motion every bit as smooth and apparently effortless as a Roger Federer forehand.

In City’s goal, Éderson set his feet and readied himself to jump. On the replays, the moment when he realized the futility of it was almost visible: the slight sinking look in his eyes as he saw the dip, the fade, the swerve on Messi’s shot.

Messi was running for the corner before the ball hit the net, before the crowd had computed the physics, before it was possible, really, to understand that he had done it. The whole thing had taken no more than six or seven seconds, from standstill to bedlam, but that was more than long enough.

It remains to be seen if this P.S.G. team, a 2-0 victor on the day, can work well enough to win the Champions League. It will take years to parse what this era of teams backed by unimaginable wealth means to the game, to fully comprehend the change that it has wrought. But for a moment, just a moment, the questions and the concerns did not matter.

All there was, just then, was Messi, his arms outstretched, full of joy, and a stadium, with arms aloft, full of awe, marveling at what he had done, at what he can do.