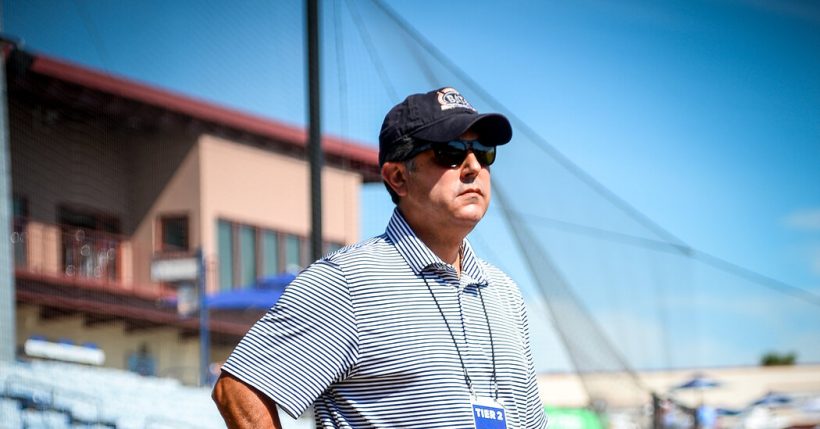 CLEARWATER, Fla. — Baseball is the national sport of Venezuela. The country has sent 428 players to the major leagues — a number topped only by the United States (over 17,000) and the Dominican Republic (794), according to the website Baseball-Reference.

Some of the sport’s biggest stars over the past few decades are from the South American country: Miguel Cabrera, Félix Hernández, Johan Santana, Bobby Abreu, José Altuve. Venezuela’s newest star, Ronald Acuña Jr. of the Atlanta Braves, trails perhaps only Mike Trout and Mookie Betts as the best player in baseball.

Given this rich tradition, many in the sport were astonished that a Venezuelan had not reached the upper ranks of a major league club’s front office until December, when the Phillies promoted Jorge Velandia, a former player who had been working his way up through the organization, to assistant general manager.

“When we were first getting ready to make an announcement and we were talking about it and somehow it came up, that this was going to be the first assistant general manager from Venezuela, I was like: ‘Really? I had no idea,’” said Dave Dombrowski, the Phillies’ president of baseball operations, who has run teams for more than two decades. Dombrowski’s teams featured Venezuelan stars like Magglio Ordóñez, Carlos Guillén, Víctor Martínez and Cabrera but never one of their countryman as highly placed as the 46-year-old Velandia.

“I was surprised,” Dombrowski continued, “because the number of quality baseball individuals from the country both on and off the field is immense.”

Velandia checks a lot of boxes for the demands of modern baseball. His résumé includes playing, coaching, scouting and executive experience. He speaks fluent English along with his native Spanish. And he has made a concerted effort in recent years to become more versed in the analytics and technology that now guide decisions throughout the game.

“He’s been there and he’s done that, which is quite a bit different than today’s G.M.,” said Benny Looper, a former Phillies assistant general manager who helped Velandia make the transition into coaching and scouting. “I don’t think you have to do that, but I think it helps to have walked in those shoes.”

Born and raised in the Venezuelan capital, Caracas, Velandia played professional baseball for 18 years, including parts of eight seasons for six teams in the major leagues, largely because of strong fielding as an infielder and a baseball I.Q. that outweighed his weaker hitting and smaller stature.

Velandia never expected to play that long. His parents came from humble beginnings and became lawyers, moving the family into the upper middle class. They expected Velandia to go to college after attending top private schools, but by then their son had fallen in love with baseball.

They relented, allowing Velandia to travel nine hours by car to Maracaibo, Venezuela’s second largest city, to train and play. At 17, he signed with the Detroit Tigers for $7,500, a moderate bonus even in 1992, and came to the United States to play speaking only the bits of English he had learned in school. But he made a pact with his parents.

“Our plan as a family was to give five years to baseball,” Velandia said. “And if in the fifth year I wasn’t good, I’d study law or sports medicine.”

He was good enough, though. In 1997, he made his major-league debut with the San Diego Padres. Throughout his career, Velandia was also curious about the scouts and executives who sat behind home plate during games and decided the fates of those on the field. 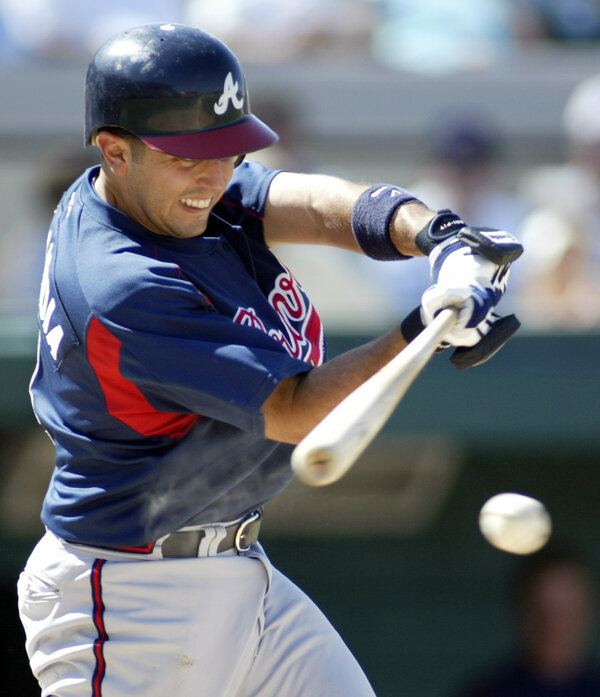 During Velandia’s final season as a player, in 2009, he was at the Phillies’ Class AAA affiliate in Allentown, Pa., when he was asked to become a player-coach. Ruben Amaro Jr., who had been Velandia’s teammate in Venezuelan winter ball and was then the Phillies’ general manager, had told Looper that Velandia was someone they should consider for post-playing positions. So Looper began giving Velandia blank scouting reports and asking him to fill them out on opposing players.

“He’s got a real good knack for seeing the game and seeing little things that a lot of us overlook, a lot of fans overlook and even scouts overlook,” Looper said. “And that was immediately recognizable.”

The Phillies carved out a path for him. They sent him to scout schools. They asked him to coach hitting for a Class A team. They promoted him up through the farm system and into the front office, where he scouted internationally and nationally, amateurs and pros.

“Anytime I went down to the minor leagues during spring training and I would sit in some of the meetings, I would listen to him talk about players and break them down, I was pretty impressed by the way he viewed the game, viewed players’ abilities and his own ability to evaluate,” said Amaro, who is of Cuban descent.

Amaro, whose father became a mentor for Velandia after signing him to the Tigers, even asked Velandia to serve as an interim major-league coach in 2015. Away from the Phillies, Velandia helped construct the Team Venezuela roster for the 2013 World Baseball Classic and was the G.M. of the Tiburones de la Guaira of the Venezuelan winter league for five years.

After the Phillies replaced Amaro with Matt Klentak in 2015, Velandia was promoted to special assistant to the G.M., a position he held for four years. He asked Klentak and his boss, the team president Andy MacPhail, who were beefing up the Phillies’ meager analytics department, if he could learn more about that side of the game.

From time to time, other teams interviewed Velandia for major-league coaching jobs or top scouting positions. The Phillies interviewed him for their managerial vacancy ahead of the 2018 season, but that post eventually went to Gabe Kapler. They did the same last winter, this time for their G.M. position. That job eventually went to Sam Fuld, a former player who had risen to the Phillies’ director of integrative baseball performance, because Dombrowski decided Fuld had more front-office experience.

Still, Dombrowski came away so impressed with Velandia that he promoted him to assistant general manager. Dombrowski said Velandia would be a jack-of-all-trades, including learning the administrative side of running a team.

“We wanted to get him around us on a regular basis and make use of his knowledge because I think he has a lot of abilities and is a future general manager,” Dombrowski said.

It is an expectation Velandia shares. “It’s not just being one,” he said, “but doing a good job.”

He isn’t sure exactly why no other Venezuelan had reached these heights in the major leagues before. Although he didn’t set out to be a Venezuelan trailblazer, he said it would be an honor to represent his country atop a team.

In M.L.B., there are a lot of Latinos on the field — close to 30 percent, and more in the minor leagues — but a dearth of them running teams, a situation that Amaro called “really atrocious.” Omar Minaya, born in the Dominican Republic and raised in Queens, was the first Latino general manager in M.L.B. history, in 2002 with the Montreal Expos. Al Avila, who is of Cuban descent, is the only current one.

Velandia said he has never felt as if he has been passed over because he is Latino or because “I speak with an accent.” He added, “I feel that the sky is the limit and if I do my job well, the doors will open.”

But, Velandia said, a few things could help over all: having top decision makers — as the former Chicago Cubs president Theo Epstein said last summer — recognize uneven representation and address it; increased college education opportunities for Latin American players, who often forego school to sign with teams when they are as young as 16; efforts to encourage more Latinos to aspire to jobs as top team executives once they retire; and more analytics training throughout every organization, something he said the Phillies had made a priority.

Many early adopters of analytics in baseball were nonplayers who eventually filled front offices. The majority of heads of baseball operations in M.L.B. now are white men who attended elite colleges and did not play the game professionally. Velandia said he believed players were catching up and that the next wave of G.M.s would be former players, like Chris Young with the Texas Rangers and Fuld, who understand the role of analytics and technology but also have firsthand experience of life on the field.

“In baseball, there’s space for everyone,” Velandia said.

As he talked on a recent morning, Velandia sat on the balcony of the executive offices at BayCare Ballpark, the Phillies’ spring training facility in Clearwater, Fla. Earlier, Velandia had interrupted an interview to take a phone call from Phillies Manager Joe Girardi, calling from the field during a morning batting practice.

Next to Girardi were Larry Bowa and Charlie Manuel, two former Phillies managers, now in their late 70s, who serve as special advisers and gregarious presences during spring training. Before his promotion, Velandia used to join them in uniform so they could be on the field helping players. They called themselves the Three Amigos, and Bowa and Manuel often told Velandia not to forget about them when he becomes a general manager one day. Now they teased him again.

“Now that I’m on the top level, they say I’m too cool for school to go hang out,” Velandia said, laughing.