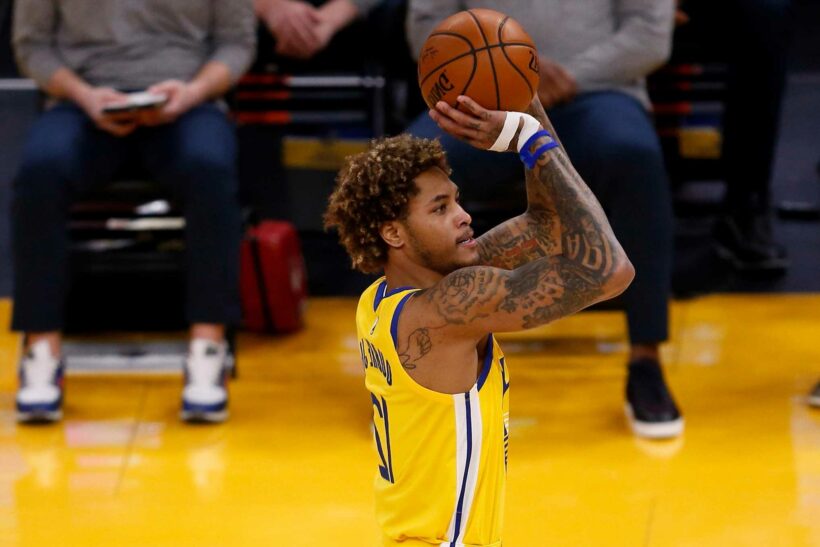 Nets aren’t bringing Knicks fans along for this playoff ride

Point guard isn’t the only crying need for the Knicks as they contemplate August’s free agency period.

The Knicks still don’t have a bona fide starting small forward and have concerns with their 2018 lottery pick Kevin Knox, who lost his spot in the rotation in late January.

One player on their free-agent radar is Warriors small forward Kelly Oubre, the 25-year-old out of Kansas. Oubre’s “3 and D’’ image took a hit early this season when he got off to a treacherous start and missed 28 of his first 30 3-pointers for his new club.

He got much better, but that beginning dragged down his 3-point percentage for the season, winding up at 31.6 percent. Oubre is an athletic 6-7 slasher with a 7-3 wingspan right in GM Scott Perry’s mold, known as a solid defender who can hit the 3.

Warriors president Bob Myers said Oubre is part of the long-term plans. But the swingman will entertain offers, as he knows he’ll be on the bench with Klay Thompson’s return.

According to one source, there is mutual interest between Oubre and the Knicks. The Knicks are one of the few teams who can offer him more than the $9.5 million mid-level exception. Oubre was drafted by the Wizards in 2015 at No. 15 and was traded to Phoenix, where he scored 29 points with three steals against the Knicks in a January 2020 game.

The Knicks need more 3-point shooting/athleticism at that position. While RJ Barrett showed progress from deep, he’s still not as good a finisher at the rim as he should be, according to analytics percentages. Scouts believe he doesn’t protect the ball enough.

Barrett also did not have a good playoffs, shooting just 38.8 percent from the field and 28.6 from 3. The Knicks will consider bringing back 3-point shooting swingman Reggie Bullock as they have his Early Bird Rights and can go over the salary cap. But the Knicks may need a plug for swingman Alec Burks, who also didn’t perform up to snuff in the playoffs and probably hit his ceiling this season as he looks for big money.

Oubre hasn’t reached his ceiling, and some scouts think being on three teams in five seasons hurt his growth.

Oubre shot 43 percent from 3 on nearly six attempts per game in February. He wound up averaging 15.4 points and 6.0 rebounds for the Warriors and shot 44 percent overall. If the Knicks wind up making an offer for Damian Lillard, the Blazers likely will ask for Barrett as part of the package, but the Knicks still view him as a building block.

Knox’s status with the organization is a mystery wrapped in a riddle. They brought in Kentucky assistant coach Kenny Payne to get the best out of him, but he regressed.
Thibodeau didn’t like his defensive motor. The Knicks coach was in win-now mode as the season wore on, not looking to waste as much time on development as previously thought. Ironically, Knox shot 39. 3 percent from 3-point range in his brief outings (35 of 89).

Despite their 41-31 record, the Knicks need more outside shooting from the swingman position, as Atlanta busted them up in the playoffs. Atlanta added 3-point shooters in Bogdan Bodganovic and Danilo Gallinari – two players Thibodeau wanted.

After being eliminated Wednesday, Thibodeau, in his last comments, noted the Hawks’ potent 2020 free agency.

“Atlanta really added some good pieces to complement Trae (Young) and I think that helped them,’’ Thibodeau said. “You look at how you match up with the teams — you start with the division, then you look at the conference, then you look at the league. Then you see where you might have opportunities, whether it’s through the draft or free agency or trades, your own player development. All four areas factor into it.”

According to a source, the Knicks are closely monitoring the Hawks-Sixers series as another tool to judge their five-game ouster in which they were blown out in the final three contests. Some in the organization believe the Hawks have been underestimated, and are better than their 41-31 record suggests due to their midseason coaching change.

The Hawks’ Game 1 victory over the Sixers did nothing to dispel the theory.