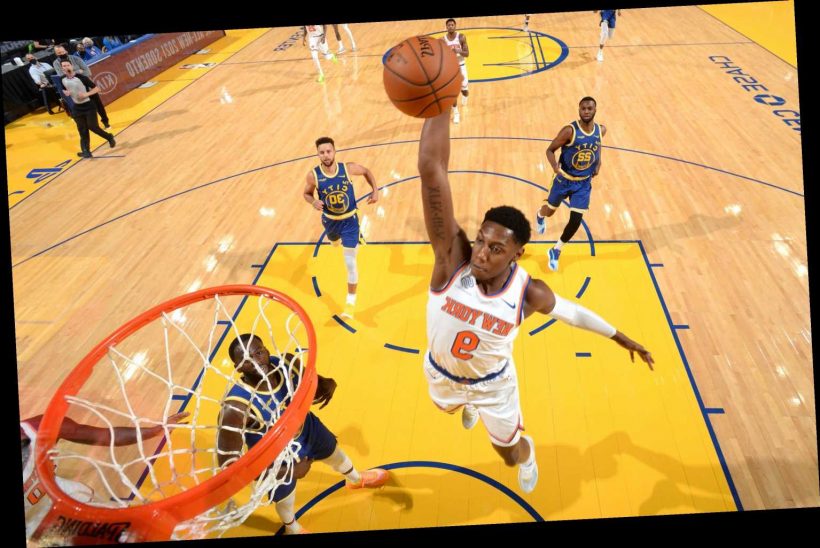 Knicks finally about to get sharpshooter back

Steve Kerr praised Tom Thibodeau’s Knicks as “a typical Thibs team” on Thursday, gushing they’ve been “defending like crazy” while “building a foundation” toward finally reemerging as a winning NBA team.

Such strong words from the three-time NBA champion coach had to mean so much more after the Knicks opened a four-game western swing with a sharp 119-104 win over Kerr’s Warriors in San Francisco. It was the Knicks’ third straight defensively sturdy victory — following a five-game losing skid — to even their record at 8-8.

“It means we”ve got a lot of work to do. We can’t feel good, we got to keep working,” Thibodeau said. “It’s a long season. You’ve got to go step by step. There are some things we’ve done well. We’ve had some good wins. But we’ve also had some games where we could’ve played a lot better in.

“So we have to be honest with ourselves and know there’s a lot of work to be done and we’re capable of improving and doing a lot better. So that’s our challenge.”

RJ Barrett netted 18 of his career-high 28 points in the first half, while Julius Randle continued to build his All-Star résumé with nearly his second triple-double of the season (16 points, 17 rebounds and nine assists).

Backup center Nerlens Noel recorded four of the Knicks’ nine blocked shots, Mitchell Robinson scored all of his 18 points after halftime and Alec Burks contributed 11 points in 31 minutes off the bench in his first game since suffering a sprained ankle on Dec. 27.

Stephen Curry finished with a game-high 30 points for the Warriors, but the two-time MVP committed four turnovers and missed nine of 14 attempts from 3-point range. Golden State (8-7) played the final two quarters without Draymond Green after he earned his second technical foul just before intermission.

Thibodeau noted before the game that the Warriors’ playing style differs somewhat with Andrew Wiggins — the former No. 1-overall pick who played for the current Knicks coach in Minnesota — and 2020 No. 2-overall pick James Wiseman starting alongside Curry and Green. Five-time All-Star Klay Thompson is sidelined with a torn Achilles after missing all of last season with a torn ACL.

“We know they play a fast pace of basketball, obviously,” Randle said beforehand. “Steph is the head of the snake with everything. He can get hot really fast and win a game single-handedly, so we’ve got to try to make it as difficult as we can for him.”

Reggie Bullock (12 points) nailed three 3-pointers in the first four minutes and combined with Barrett for 23 points in the first quarter, as the Knicks shot 54.5 percent from the floor and grabbed a 40-31 lead — their highest scoring output for any quarter this season.

Curry, the NBA’s third-leading scorer (28.1 ppg) coming into the game, was held scoreless for the first eight minutes until finally converting a three-point play late in the period.

Randle answered with a three-point play for the Knicks, and Curry missed his free throw after Elfrid Payton (15 points) hacked him while draining a 26-footer from beyond the arc.

Barrett finished 4-for-4 from the field — including two made 3-pointers — in pumping in 14 in the session. Despite the slow start, Curry managed 11 in the final four minutes to keep the Warriors within nine.

Burks, who appeared in 48 games last season for Golden State, had checked in with just under five minutes remaining in the first quarter, making his return after missing 12 games.

Wiggins registered seven points and Curry had nine during a 24-15 Warriors run to forge a 55-55 tie with two minutes remaining before halftime. But Payton nailed a three to nudge the Knicks back ahead en route to a 63-57 lead through two quarters. Green was ejected for earning his second technical foul with 1:04 to go in the half.

Robinson dunked twice and scored the first nine of his 18 second-half points in the third as the Knicks extended their lead to 89-76 entering the final quarter.

The first of two baseline dunks by rookie Obi Toppin and a 3-pointer by fellow first-round pick Immanuel Quickley put the Knicks up by 16 barely three minutes into the fourth.