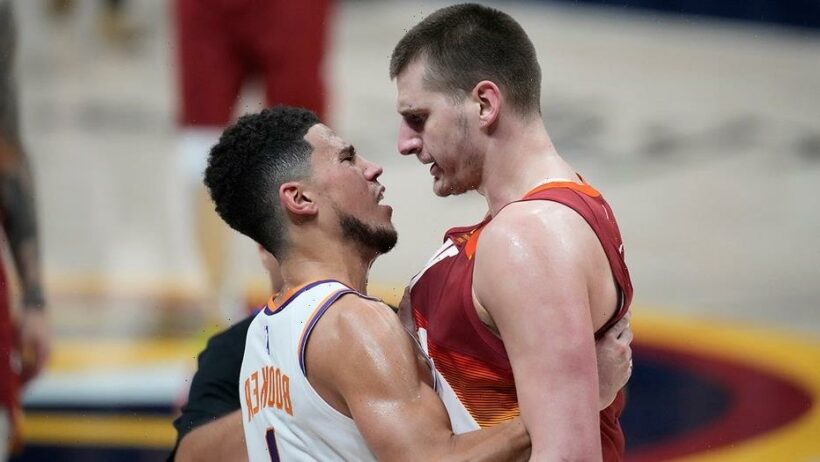 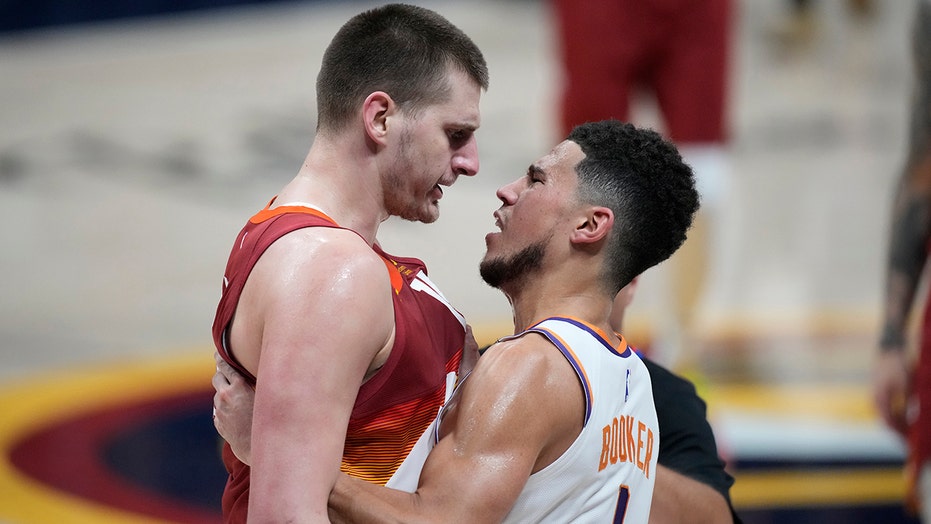 The Phoenix Suns roared into the Western Conference Finals for the first time in 11 years Sunday night with a testy 125-118 victory over Denver that completed a four-game sweep.

The Nuggets? Well, they went down fighting.

Paul scored 37 points and Booker added 34 in a physical game marred by MVP Nikola Jokic’s ejection for a flagrant foul in the third quarter.

Jokic was tossed with 3:52 left in the third and his Nuggets trailing 83-76 after his hard right-hand windmill swipe sent the ball flying but also caught Cameron Payne in the face.

Jokic said he meant only to commit a hard foul on Payne to spark his team.

“I wanted to change the rhythm of the game, I wanted to give us some energy,” Jokic said. “I tried to make a hard foul. Did I hit him? I didn’t know. I say sorry if I did because I didn’t want to injure him or hit him in the head on purpose.”

Booker took umbrage at the hard foul and got in the big man’s face before teammates and coaches pulled everyone apart.

“It was just an emotional play,” Booker said. “I don’t think he meant harm by it. It was just a frustration foul. It was tough, just defending my teammate. That was it.

“I saw him go up to Cam after and apologize. I’ve played against the Joker multiple times. I know he’s not a malicious player.”

Officials assessed a double technical on Jokic and Booker and after a review, ejected the MVP after upgrading his foul to a Flagrant 2. Jokic finished with 22 points and 11 rebounds in 28 minutes.

Nuggets coach Michael Malone said he watched the play while the officials reviewed the call “and I just assumed it would be a Flagrant 1 at the worst.”

“I didn’t feel like it warranted a Flagrant 2 ejection because he’s making a play on the ball,” Malone said. “There’s marginal contact to Cameron Payne’s nose, I believe. So, I was shocked. I’m still a little bit shocked that they called a Flagrant 2 and ejected the MVP on such a play.”

“I didn’t really think it was anything malicious,” Williams said. “In those moments you have to regulate your emotions. That’s what we’ve been talking about all season long.”

“At replay review, we saw wind up, impact and follow through, which lead to unnecessary and excessive contact above the shoulders and also into the face,” crew chief David Guthrie explained.

With their franchise-record seventh straight playoff victory, the Suns advanced to the conference championship for the first time since 2010 — the last time they even reached the playoffs.

After knocking out LeBron James and the defending champion Lakers in Round 1, the Suns quickly dispatched Denver and made Jokic the first MVP to get swept in a playoff series since Magic Johnson in 1989.

Will Barton led Denver, which trailed by 13 heading into the fourth quarter, with 25 points, Michael Porter Jr. added 20 and Monte Morris 19.

The Nuggets survived the loss of star Jamal Murray to a torn ACL on April 12, winning 13 of 18 to close out the regular season and taking care of Portland in five games in the opening round.

They went farther than any of last year’s semifinalists, but they sorely missed Murray against the loaded Suns.

“Hopefully we can start next season fresh and healthy as possible to make another run at this thing,” Malone said.

Every time the Nuggets made a run, Paul was there to stop it. His 37-point outburst was one more than his age and marked his best production in three years.

“It was a great series for him,” Morris said. “Salute to Chris Paul. He played amazing.”

“He always had an answer for everything we tried,” Facundo Compazzo added.

Booker credited Paul and his veteran leadership for transforming the Suns from an up-and-coming team in the bubble last year to a championship contender this summer.

“You can ask anybody on this team how has Chris developed your game and everybody’s going to have a lengthy answer because he cares,” Booker said.

Thanks in large part to Paul, Jokic became the first MVP to get swept in a playoff series since the Pistons downed Magic Johnson and the Lakers in four in the NBA Finals in 1989.

Jokic’s ejection came 48 hours after an emotional celebration before Game 3 in which the Serbian dedicated his MVP trophy to his teammates, coaches, trainers and the front office.

The only NBA player to play all 72 games this season, Jokic spent the fourth quarter in his locker room as his teammates’ comeback without him fell short.

“We’ve never been in that position all season with Nikola not being out there,” Morris said not long after fans streamed from the arena chanting “MVP! MVP!”

Suns: Phoenix trailed just once at 2-0 before Booker’s 3-pointer put the Suns up for good. … Paul shot 14 of 19 from the floor and made all nine of his free throws.

Nuggets: Murray shot one-footed jumpers before the game and drew a loud ovation when he drained one from halfcourt as he walked off.