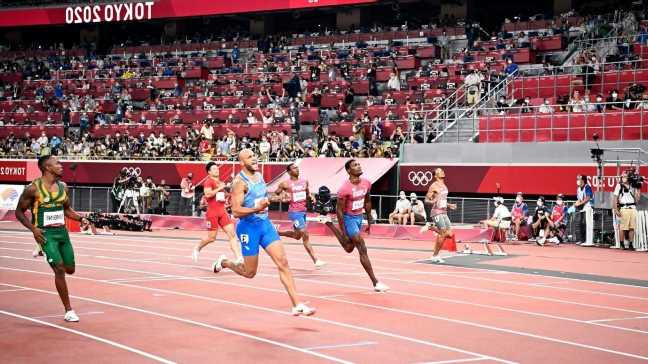 No Trayvon Bromell, the fastest man in the world this year. No Jamaicans. Two almost anonymous Americans. Competitors from China, South Africa, Nigeria, Great Britain, and — for the first time in Olympic history — Italy.

Forget about turning the page to a new era of men’s 100-meter sprinting. These Olympic finals wrote an incredible new story, with an unexpected crop of athletes dashing into the void left from 13 years of Usain Bolt dominating the event, the sport of track and field, and the world’s imagination.

When the final race was run Sunday night in Toyko, it was the Italian, Lamont Marcell Jacobs, who won gold in 9.80 seconds. No Italian man had ever made the Olympic 100-meter final before. Fred Kerley of the United States, who until recently was a 400-meter runner, took silver in 9.84. Andre De Grasse of Canada won bronze in 9.89. All three medalists ran personal bests in the final.

“I really didn’t know anything about him,” Kerley said after Jacobs held him off down the stretch. “He did a fantastic job.”

De Grasse seemed to have trouble remembering the name of the man who beat him: “9.80 from the Italian guy, I didn’t expect that,” he said. “I thought my main competition would have been the Americans, but definitely he came to play. He executed. He did his thing so congrats to him.”

The biracial “Italian guy” was born in El Paso, Texas, to an American father, and moved to Italy as a baby with his Italian mother. He switched from the long jump after a series of injuries, and the first time he ever ran under 10 seconds was this season. But he peaked at the perfect time, running 9.94 in the first round and 9.84 in the semis, then edging Kerley to seize the gold.

“It’s a dream, a dream, it is fantastic,” Jacobs said in Italian after the race.

Did he even believe it was possible for him to win gold, given that his personal best before the Olympics was like a swift practice run for the best in his sport, and that as recently as two years ago he was primarily a long jumper?

“It was my childhood dream to win an Olympic Games and obviously a dream can turn into something different, but to run this final and win it is a dream come true,” said Jacobs, 26.

Kerley, a 26-year-old from central Texas, won bronze in the 400 at the last world championships, in 2019. His own website, fkerley.com, doesn’t list him as a 100-meter runner. But with a tender ankle hampering his performance on the curve at the U.S. Olympic Trials, he jumped into the 100 almost on a whim and clocked 9.86 to grab a berth for Tokyo.

Kerley got out of the blocks well and ran even with Jacobs for most of the race, but Jacobs pulled away in the last few meters and beat him by half a step. Standing on the track before grabbing his American flag, Kerley’s face had the expression of a man who let gold slip through his fingers.

“I executed the race perfectly and I came up with a silver medal,” Kerley said. “I can’t complain.

“Coming from the 400, coming from my main event to not my event, and coming away with the silver medal at the biggest stage of my career, I’m blessed with it.”

Google was working overtime on Sunday serving up information to curious fans about the unfamiliar finalists. One was an American named Ronnie Baker, who finished fifth in 9.95 after scorching a 9.83 in the semis. Another was Su Bingtian of China, who finished sixth in 9.98 after a semifinal 9.84. Akani Simbine of South Africa was fourth in 9.93; Enoch Adegoke of Nigeria pulled a hamstring, and Zharnel Hughes of Great Britain was disqualified for a false start.

None of them were named Trayvon Bromell, who came into the Olympics as the favorite and was eliminated in the semifinals after failing to crack 10 seconds in either of his two races.

Bromell overcame a childhood of poverty, violence and numerous injuries. He made the 2016 Olympic team but injured his Achilles in Rio, was taken off the track in a wheelchair, and doctors thought the subsequent surgery might end his career. Bromell fought his way back into top form, but after a sizzling June when he ran 9.77 and 9.84, he couldn’t get up to speed in Tokyo.

“I want to say thank you to everyone who’s been with me on this journey,” Bromell tweeted afterward. “Lord knows how much I wanted to be in that final. BUT I walk away with a smile because I know I showed many that after 4 years out, you can still fight and make dreams come true.”

“No need to be sad. I’m not,” he said in another tweet. “Life for me is about changing lives, not material things. God is still working in my life.”

Another odd sight in the finals was the lack of any green-and-gold Jamaican uniforms after a decade-plus of Jamaican men’s sprint medals. (The Jamaican women still swept the 100-meter medals in Tokyo.) With Bolt comfortably retired with his 9.58-second world record, the last Jamaican standing in the Tokyo 100 was Yohan Blake, who was eliminated in the semis.

Jacobs said he wasn’t yet a full-fledged professional athlete in 2016, when he watched Bolt’s races on TV. “It’s unbelievable, I’m here today where he was before. It’s incredible.”

“Maybe tomorrow I can imagine what they are saying,” Jacobs said, “but today it is incredible.”