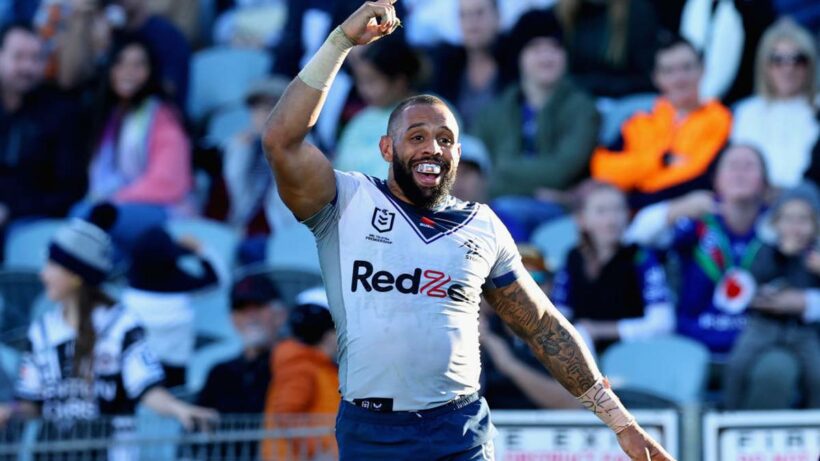 The Warriors have learnt some tough lessons against the top teams in 2021, and this was another severe one.

They were comprehensively beaten 42-16 by the Storm, with the game over just after halftime.

In terms of effort, it was an improvement on the heavy Anzac Day defeat in Melbourne, because it was a contest beyond the first quarter, but there weren’t many other positives.

The defeat was compounded by a serious pectoral injury to Chanel Harris-Tavita, with the halfback set to be out for an extended period, while Wayde Egan (concussion) was another casualty.

The result extends the Warriors’ winless run against the Storm to 11 games, with the last victory back in 2015.

Roger Tuivasa-Sheck had a fine game, in his 100th Warriors match as captain, but few others could match his standards, though Ken Maumalo was excellent in his farewell match, capped by a hat-trick.

There isn’t much margin for error against the Storm, but the Warriors were pressured into plenty of mistakes, often in costly areas.

Their attack was mostly ineffective, especially in the first half, when they couldn’t convert pressure and territory into points, and defensively, it was sweet and sour. Some wonderful efforts to save tries were mixed with some attempts well below first-grade standard.

Maumalo was a late inclusion, before he officially joins the Wests Tigers on Tuesday. He gave a reminder of why he has become so popular – and why he will be missed – with strong charges and tough post-contact metres.

The Warriors dominated territory early, and a Kodi Nikorima penalty gave them a brief lead.

They had the best of the first quarter, but never looked likely against the Storm’s swarming defence. Kicks were a fraction too far, passes not quite slick enough and the end product just wasn’t there.

After all their pressure, Melbourne made them pay with a trademark try, built on the pace and awareness of Harry Grant from dummy half and finished off by Dean Ieremia.

From there the Storm found another gear; things shifted a notch, and they looked particularly effective down the right edge.

Brandon Smith, once a Warriors target, swung the momentum of the half. Everyone knows his intentions from close range, but Jack Murchie and Addin Fonua-Blake were unable to stop him. It was particularly impressive, given the Kiwi hooker had taken a hit-up two plays earlier.

From there it threatened to be a Storm feeding frenzy. Only a tremendous tackle by Harris-Tavita – smashing Smith in the shadow of the posts to jolt the ball free – stopped a certain try – but his work was undone in the next set when Murchie coughed up possession near halfway.

Tuivasa-Sheck then produced another defensive miracle, somehow holding up Ieremia over the line, despite the winger having everything in his favour.

But again, that effort was undone moments later, when Euan Aitken lost the ball in a strong tackle and Josh Addo-Carr dived over in the left hand corner after slick work from Nico Hynes.

The Storm’s fourth try, four minutes into the second half, summed up the day. The Warriors were hot on attack inside the Storm quarter but pushed a pass to give up possession. The Victorian team rumbled downfield, before Jahrome Hughes pounced on a loose ball, after an opportunistic burst from Grant. It was fortunate, but the Storm tend to make their own luck.

Justin Olam extended the Melbourne advantage – after swift passing at pace – before Maumalo finally gave the enthusiastic crowd something to cheer about, finishing powerfully in the corner in the 60th minute.

Grant’s 66th minute try won’t look good in post-game reviews – as he strolled over near the line, while Tom Eisenhuth also pushed through tired defence to score.

Two late tries to Maumalo added some respectability to the scoreline, and the winger was clearly emotional as the enormity of his exit began to sink in.