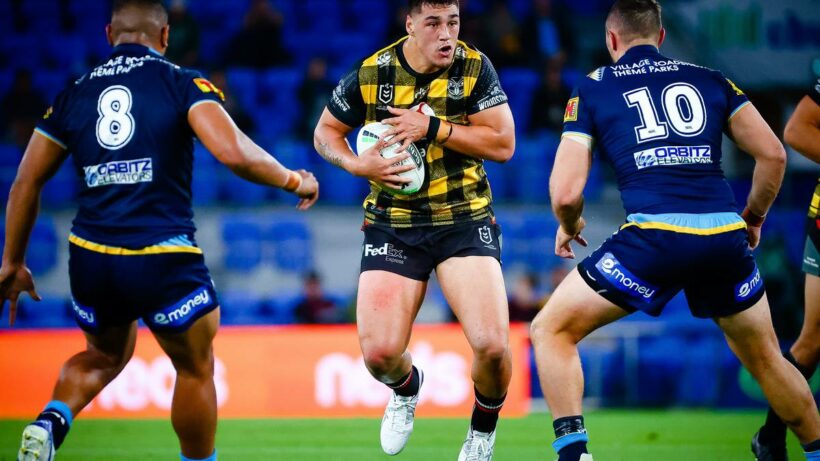 The Warriors have announced another member of their 2021 squad will not be with the team in 2022, with promising young prop Jamayne Taunoa-Brown released to explore a different opportunity.

The club granted the 24-year-old’s request for an early release from his contract, which ran until the end of the 2022 season, to allow him to join a rival NRL club yet to be revealed.

Initially joining the club on a train-and-trial deal, Taunoa-Brown earned himself a fulltime deal ahead of the 2020 season. He impressed in his rookie year with the club, averaging 95 running metres and 27 tackles in 19 games on his way to being named the club’s Rookie of the Year for the 2020 season.

However, with the inclusion of established forwards Addin Fonua-Blake, Matt Lodge, Ben Murdoch-Masila and Kane Evans brought into the squad for 2021, opportunities were limited for Taunoa-Brown – appearing in 13 games for the club as well as two for the St George Illawarra Dragons, who he joined on a short-term deal during the season.

“Unfortunately, we were unable to offer him a contract beyond 2022 so, with his best interests in mind, we’ve reluctantly agreed to let him go so he can accept a long-term offer for his future and security,” Warriors recruitment manager Peter O’Sullivan said.

“It’s unfortunate to lose Jamayne as we have seen him progress from the Intrust Super Cup at Brisbane Norths to train-and-trial then a top 30 contract, but we couldn’t stand in his way of accepting such a good offer considering our current crop of middles.

“We thank him for his efforts and wish him well moving forward.”

Taunoa-Brown is the third player to part ways with the Warriors in recent weeks. Evans was released earlier this month, with winger and fan favourite David Fusitu’a parting ways with the club earlier this week. Both Evans and Fusitu’a are set to take up opportunities in the English Super League. The departures free up spots on the roster to welcome new additions ahead of the 2022 season.

Returning half Shaun Johnson and former Gold Coast Titans half Ash Taylor are the only new arrivals to be announced by the club so far, with Taylor joining on a train-and-trial deal in a bid to earn a spot on the fulltime roster.