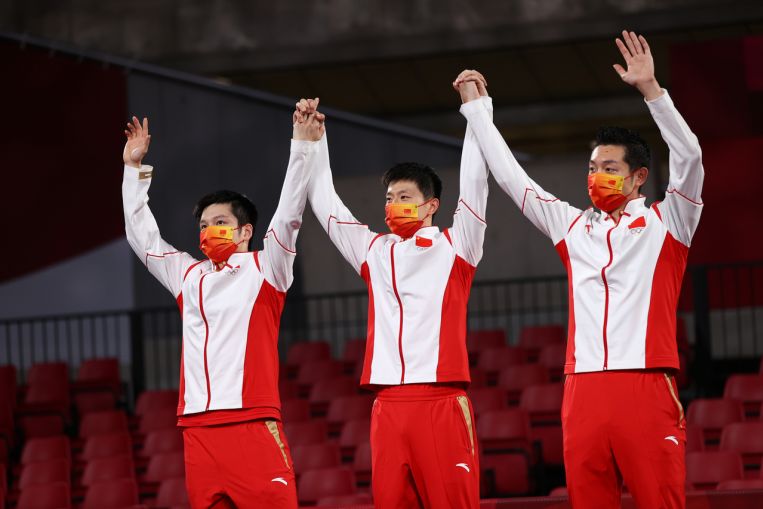 Up against the world’s top three paddlers in Fan Zhendong, Ma Long and Xu Xin, the German team were always facing an uphill struggle, and China’s Xu and Ma steamrollered their opponents 3-0 in the opening doubles match.

But world No. 7 Dimitrij Ovtcharov then fought hard to try to turn the tables against world No. 1 Fan, eventually going down 2-3.

This is China’s fourth consecutive gold medal in the event since it was introduced at Beijing 2008.

Earlier, Japan clinched bronze with a 3-1 win over South Korea.

Jun Mizutani and Koki Niwa guided the team event to a good start with a win against South Korean duo Lee Sangsu and Jeoung Youngsik. World number four Tomokazu Harimoto, aged 18, followed with a 3-1 win in the singles match against Jang Woojin, 25.

South Korea fought back with Jeoung crushing Niwa 3-0, but Mizutani sealed Japan’s victory with a win over Jang.

“When Mizutani was leading the opponent 9-2 at the deciding game, Harimoto was already asking me how we should approach him to celebrate the victory,” Niwa said after the match.

Harimoto, born in Japan’s Sendai, which was hit by a major earthquake and tsunami in 2011, said he dreamt of earning a medal ever since Sendai native Ai Fukuhara visited his elementary school to show the silver she won in London in 2012 in the women’s team event.

“To think that it’s my turn to be bringing back the medal to my hometown, it means so much to me,” he said.