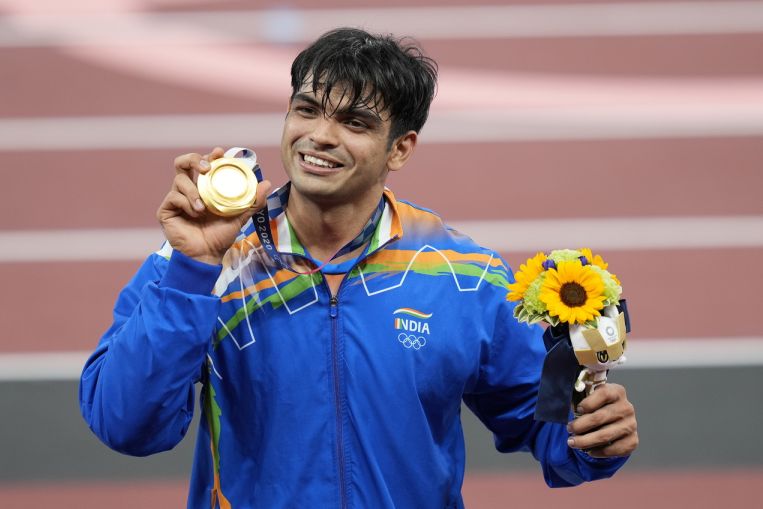 NEW DELHI (AFP) – Neeraj Chopra’s historic feat in winning India’s first-ever track-and-field gold at the Olympics will be commemorated every year, officials said on Tuesday (Aug 10), as the javelin star spoke of his desire to inspire future athletes.

A medal-starved India revelled in Chopra’s stunning achievement in Tokyo, which ended a more than century-long wait for an athletics gold, with politicians, celebrities and the general public heaping praise on the 23-year-old.

The Athletics Federation of India said Aug 7 – the date of Chopra’s triumph – would be dubbed “Javelin Throw Day”, with annual state meets for the sport held across the nation of 1.3 billion people.

“I feel honoured that I could become an inspiration for Indian athletics and javelin in particular,” the farmer’s son from Khandra village just outside capital New Delhi told reporters on Tuesday.

“I am happy kids will get an opportunity to compete in javelin events and hope that we get more medals in athletics.”

The new poster boy of Indian sports, with his boyish charm and tousled hair, has come a long way from being teased as an overweight child to throwing 87.58 metres for the gold in the javelin final.

Hundreds of fans had gathered at Delhi’s international airport on Monday to give Chopra a hero’s welcome.

Chopra said the enormity of the achievement only sunk in when he saw people banging drums and playing music as his car left the airport and headed for a party welcoming him back home.

“It is a dream of any athlete of the world to win an Olympic medal and there is nothing bigger than gold, so the feeling was surreal.

“When I arrived in India the mood was different and when I landed, I realised I had done something big for the nation that I am getting this honour.”

Six podium spots at the 2012 London Games was the country’s previous best finish but Indian athletes only managed two medals at Rio in 2016.

The best athletics showings before Chopra’s triumph in the modern Games was two silver medals won in Paris in 1900 when India was a British colony.

“Slowly but surely our sports is improving,” Chopra said, adding that the newfound “self-belief” in athletes would lead to more success for his country at future Olympics.

Chopra, who won gold in the Commonwealth and Asian Games in 2018, said he was now targeting a top podium finish at the World Athletics Championships to be held in the United States next year.