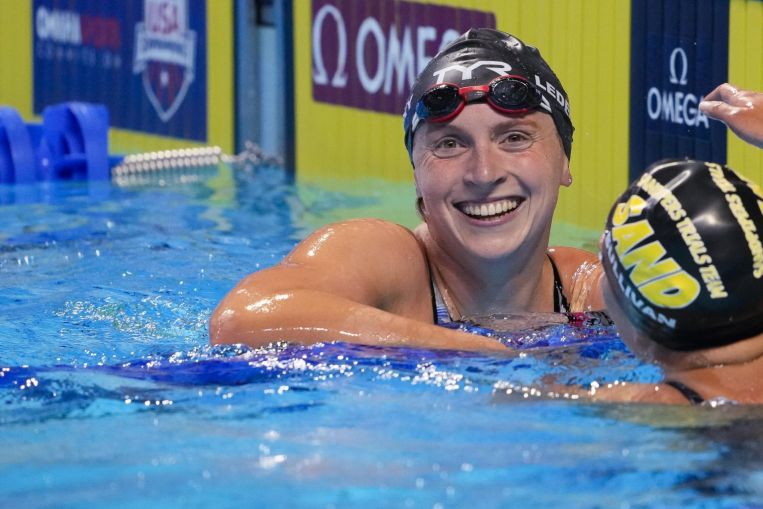 TORONTO (REUTERS) – It was the ‘Katie Ledecky show’ at the United States Olympic swimming trials on Wednesday (June 16) as she stormed to two decisive wins in the 200 metres and 1,500m freestyle in just over an hour.

Ledecky, who had booked her Tokyo ticket by winning the 400m free on Monday, took on her toughest test of the week in the Omaha pool by racing in the two finals, adding two more events to her Olympic programme.

After powering to a commanding win in the 200m, Ledecky was back 70 minutes later and cruised home nearly half a pool length ahead of her nearest challenger Erica Sullivan in a time of 15min 40.50sec, the fastest in the world this year.

The 24-year-old has now qualified in three events and will defend the 200 and 400m free gold medals she won at the 2016 Rio Olympics, while the 1,500m will be contested by the women at the Games for the first time in Tokyo.

“It went well,” said Ledecky, who owns the 10 fastest times ever in the 1,500m. “I told our heat in there we’re making history tonight, I think we were all so fired up to finally get this chance.

“I just tried to cherish the moment, it was a long time coming and I’m glad we’re finally here.”

Ledecky kicked off a gruelling evening in style, putting open water between herself and the chasing pack to take the 200m free in 1min 55.11sec.

The top four qualify for Tokyo as part of the 4x200m relay team.

“It’s been tough but I have a very supportive group behind me,” said the 31-year-old Schmitt, who also earned a big hug from friend and former teammate Michael Phelps.

“I prepared just like I had for the last three and I don’t think it’s sunk in yet.”

The women’s 200m individual medley was a thriller, with the top three separated by 4/100ths of a second, but it was Alex Walsh grabbing the ticket to Tokyo with a time of 2:09.30.

Zach Harting was the winner in the men’s 200m butterfly in 1:55.06 and heads to Tokyo carrying medal hopes in an event Phelps had dominated during his storied career taking gold at the 2004, 2008 and 2016 Games.

Caeleb Dressel, who with Ledecky is expected to light up the pool in Tokyo, posted the top time in the men’s 100m freestyle semi-finals in 47.77, just 1/100th of a second ahead of Zach Apple.