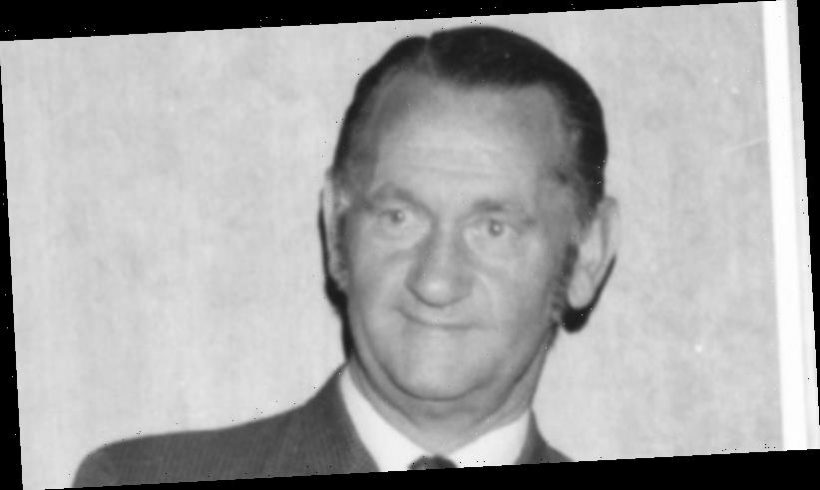 That someone was Percy Beames. He’s bobbed up again now because of a short memoir that recently came into the hands of his son, Colin, prompting memories of a uniquely tripartite sporting life.

Percy. The very name tells you that this was another time. Beames writes of how Richmond’s Captain Blood, Jack Dyer, wrought havoc against Melbourne in the 1940 second semi-final, breaking Norm Smith’s cheekbone and knocking out Roy Dowsing. In grand final week, Melbourne coach Checker Hughes invited 10 players to a meeting in a city pub to work out what to do about Dyer. It was decided to bring in Jack O’Keefe, a policeman and a heavyweight boxer. 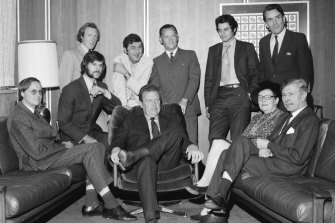 Percy Beames, fifth from left, became a journalist at The Age after exemplary chapters as a footballer and cricketer. Credit:The Age Archives

“O’Keefe was instructed to take up a position between any Melbourne player and the ball whenever there was a contest with Dyer,” Beames wrote. Melbourne won.

In the last home-and-away match the next year, Beames was reaching to spoil another hard man, Essendon’s Jack Cassin, front-on at the MCG. Cassin’s leg was outstretched perilously. “Unfortunately for him, I realised his intention,” Beames wrote. “I jumped over his boot and at the same time, I dropped him with my fist.” Beames, incidentally, was 165cm and 70kg.

“Immediately, I thought of the stupidity of my action,” he wrote. “This would mean a six-week suspension.” That was the premiership gone for Beames.

But no report was made. The next Wednesday, Beames took a call at his desk at work. It was Allan Coward, the umpire. “I saw what Cassin intended to do to you,” he said, “and I thought you were justified in doing what you did.”

Melbourne did win that premiership, making three in a row. Astute judges say that if Norm Smith was a medal then and not a teammate, Beames would have won all three.

From a large, poor Ballarat family, Beames’s horizon was limited until he was offered a scholarship to Ballarat college, awarded by Field Marshall Pompey Elliott in the name of his brother, George, who was killed in World War One. Beames captained the school at footy, cricket, athletics and tennis.

After two games for Golden Point, he was whisked away to town, to a job with Vacuum Oil offered by Melbourne footy club president Joe Blair. He was put up initially in a boarding house near the MCG, heard much merry-making and remarked lightly to his roommate the next morning: “This is a funny joint.” His mate enlightened him. “I had spent my first night in Melbourne in a brothel,” Beames writes.

Waiting for a clearance and his training gear, Beames idled for a few weeks. He was excited when Melbourne sent him a ticket for the Footscray game at the MCG. “I thought to myself, what a great privilege to watch these great players in action,” Beames wrote. “Until then, I had never seen a league game. My only knowledge of league football was reading the Sporting Globe when it came up on the Adelaide Express on a Saturday night.”

“I was amazed when, far from appearing almost superhumans, the players were prone to normal errors. By the end of the day, I was just a little confident that I may be able to play one game of football.”

Beames had envisaged a superior species of player and game. “I was amazed when, far from appearing almost superhumans, the players were prone to normal errors. By the end of the day, I was just a little confident that I may be able to play one game of football.”

At work on the morning of his senior debut, a mate asked if he realised he was playing on Stan Judkins. “Who’s he?” Beames asked. “Judkins. Won the Brownlow Medal last year.”

By year’s end, he knew. He finished fifth in the count, from just 11 games, and fifth again the following year, both times behind Fitzroy legend Haydn Bunton snr.

Beames played 213 games over 14 years for the Demons. Glimpses in footage of the 1939 grand final win over Collingwood show him swooping gracefully across the front of packs, as neat and nifty as the part in his hair, nothing like the midfield bulldozers of today.

After the 1941 flag, Beames wanted to retire, but was convinced to stay on for three years as captain-coach of a war-gutted team. In time, Beames was named in Melbourne’s team of the century and was inducted into the AFL’s hall of fame.

But that wasn’t even the half of it. At a time when there was a season to everything, Beames played 189 prolific first XI games for Melbourne Cricket Club, won four pennants and made 18 appearances for Victoria.

It began badly. In a game against Essendon in his first season, Beames missed a hook at Harry “Bull” Alexander. To get an idea of Alexander, he would in time play a Test for Australia specifically tasked to rough up Douglas Jardine at the end of the Bodyline series.

Hit just above the left eye, Beames was carted from the field by the other players on a door and marched straight into a private hospital across the road. The next morning, he was startled to read on the front page of a newspaper that a cricketer had been killed. To his relief, it wasn’t him.

To this day, and probably forever, Percy Beames is the only man to belong to the 200 clubs in footy and cricket.

Beames built his career to a point where he might have entertained Australian prospects, but World War Two put an end to all cricket. He played with and against the greats. His path and Keith Miller’s were tightly wound. He was Miller’s manager at Vacuum Oil and they made their maiden Sheffield Shield centuries together in a match against South Australia captained by Don Bradman. Bradman made 267, of course.

To judge from two innings a few days apart against Tasmania one season – one a century, one a double, both in better than even time – Beames was quite the dasher. Reputedly, his rasping square drive was something to see – except to the fieldsman at cover point. His career average for Victoria was 52.

At 34, Beames had retired from footy, but was still the cricket club’s leading run-scorer, and when cricket resumed after the war, he was made captain of Victoria. The Shield was not formally contested but, for the record, Victoria went through undefeated.

By then, Beames was beginning to dabble in a bit of casual writing for The Age, which led to the next year to a job as chief footy and cricket writer. It lasted 30 years.

In footy, his staples were previews and reviews. Long before today’s multi-media saturation, they were must-reads. What they lacked in adornment, they more than made up for in authority. He knew what he was talking about. More useful than any medal, he had the Norm Smith in his pocket.

His cricketing recollections are piecemeal and quirky. One is of the horse that towed the roller at the Gabba soiling the pitch mid-Ashes Test in 1950, then adding a bit of extra watering, too.

There was the famous tour of South Africa in 1949/50 when the lack of a boat home meant that team and press were away for eight months. It was the original bubble. Beames writes that to get to the West Indies in 1955, their plane flew via “a coral strip in the Pacific Ocean, using the night stars for navigation”.

On the rest day of the MCG Ashes Test in 1955, Beames got a tip-off that the badly wearing pitch had been heavily watered, a no-no. The culprit was curator Jack House, an old Melbourne teammate.

What happened next is a peek into another time and its sensibilities. Beames’s info was explosive. He and his editor worried what it would mean for Anglo-Australian cricket. The editor, Harold Austin, decided not to run the story. “I thought to myself what it showed what a great editor Harold Austin was,” Beames said. “He was more interested in the game than in a scoop for his newspaper.” England’s eventual victory defused any remaining spark.

Beames retired from The Age in 1976. He died in 2004, aged 92. Almost to the end, he was such a fixture at the MCG that you wondered that if they took him away, it might fall down.

Beames’s few pages make for a sketchy history. Between the lines, there’s another world, no doubt. Much can be secreted away in the various pockets of a three-piece suit, the uniform of the day (I’ve worked with sports journos whose outfit didn’t always consist of three items of clothing, total).

That’s not to suggest that Beames was any sort of rogue, quite the opposite. He never uttered a bad word, nor was one heard against him. It’s just to wonder what else a couple more beers and a bridge across the generation gap might have revealed.

To this day, and probably forever, Percy Beames is the only man to belong to the 200 clubs in footy and cricket. 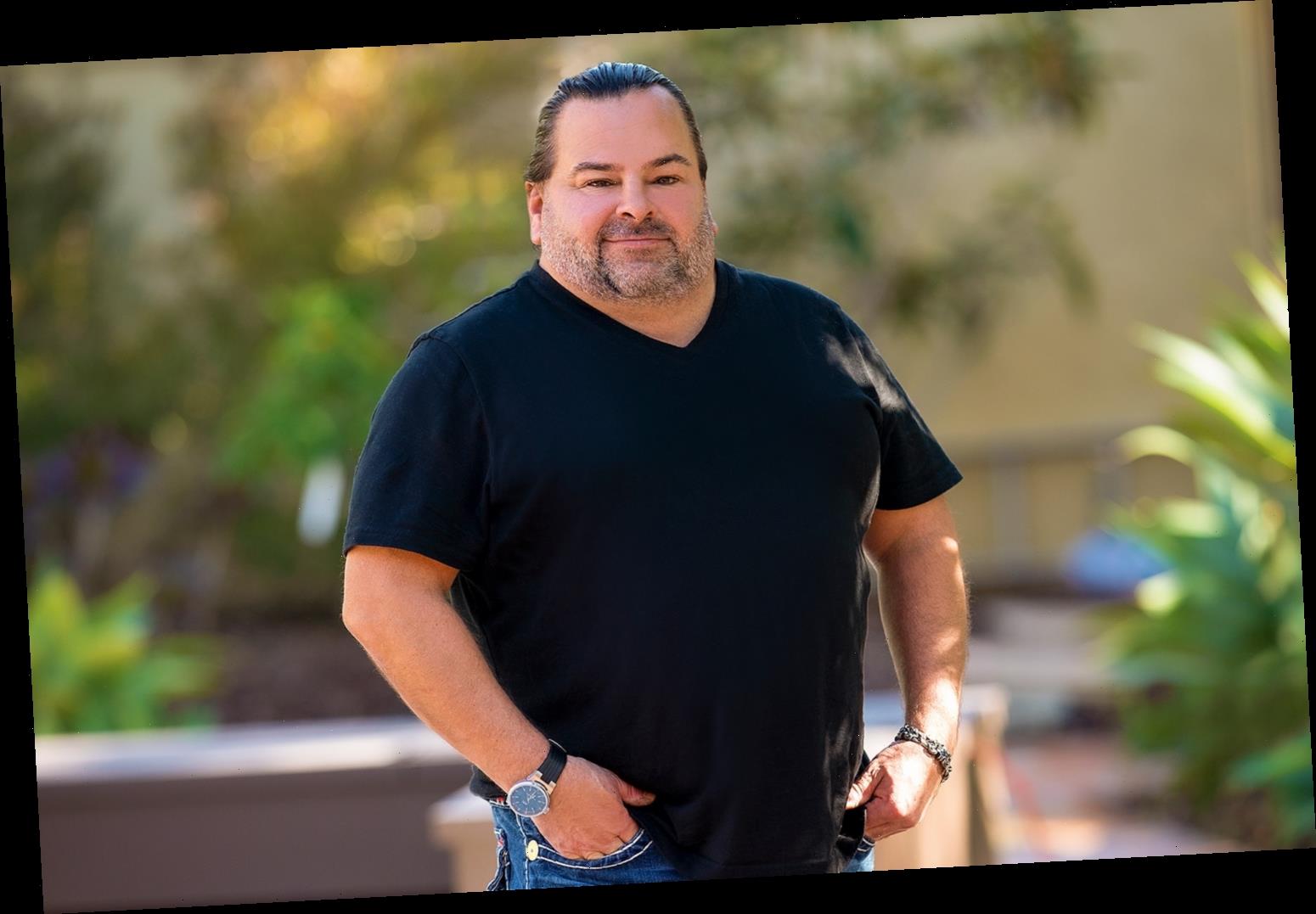 90 Day Fiancé's Big Ed Tries Out a New Hairstyle Ahead of His Date: 'I Want It to Be Special'
CELEBRITIES