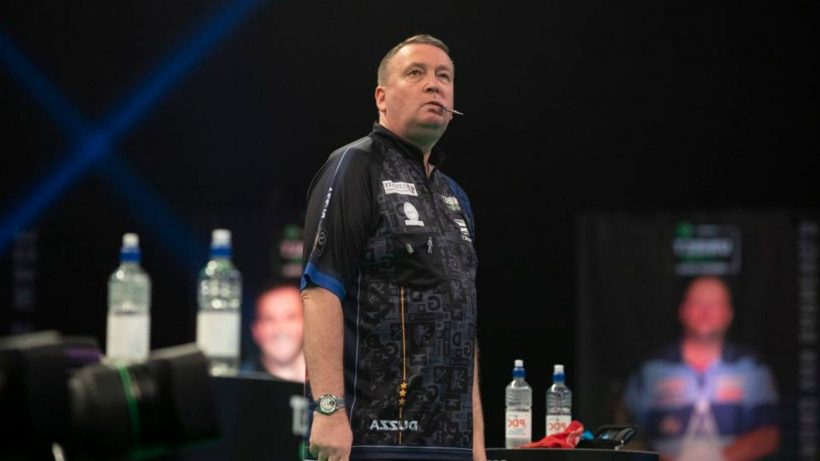 Glen Durrant’s defence of his Premier League title is over after he was eliminated following defeat to Jose de Sousa in Milton Keynes.

Six months on from claiming his first televised PDC major in Coventry with victory over Nathan Aspinall, Durrant suffered a seventh successive defeat to sit bottom of the pile.

The three-time BDO world champion has lost every match he has played in the competition this year and it means he is eliminated two nights before Judgement Night.

Who joins him remains to be seen as Rob Cross slid into the relegation places after a fourth defeat from his last five matches was followed by James Wade’s victory over Peter Wright that moved the Machine out of the bottom two and sucked Snakebite deeper into the mire.

At the top of the table Dimitri Van den Bergh moved a point clear of the field with his win over Cross while Gary Anderson and Michael van Gerwen shared the points in a 6-6 draw.

I just want my wife / daughter right now and darts doesn’t seem to matter ….. FOR NOW

Jose de Sousa made it three successive wins as he inflicted another defeat on Glen Durrant, whose reign as champion came to an end. 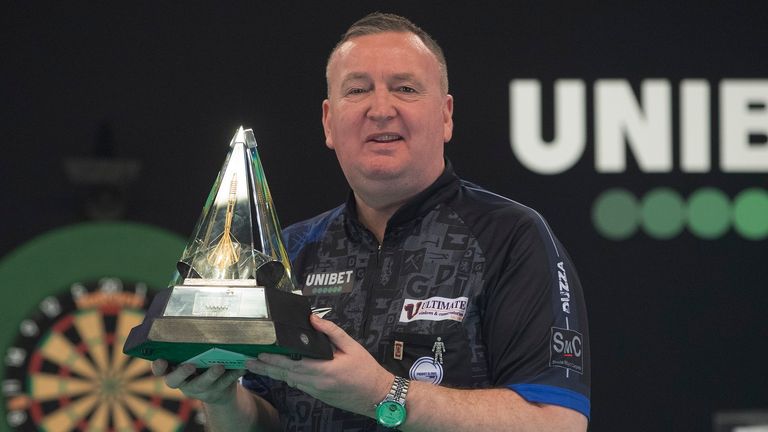 Duzza knew he needed a win to have even the slimmest chance of avoiding elimination, but despite an improved showing in the opening match of night, Durrant slipped to a seventh consecutive defeat.

The man from Middlesbrough, who beat Nathan Aspinall to win the title at Coventry’s Ricoh Arena in October, started well with a classy 105 finish the highlight as he kept his nose in front until the sixth leg. De Sousa made his move after levelling at 3-3, breaking in 11 darts in the next leg before winning the next to move 5-3 ahead.

An improved Duzza claimed the ninth leg with an 87 finish, ensuring for the first time in the competition he won more than three legs, but it could not hold up De Sousa’s charge as he claimed the next two for a victory.

Michael van Gerwen and Gary Anderson shared the points in a quickfire end to the evening that featured both men showing flashes of their best but also the inconsistencies that leave them trailing Dimitri Van den Bergh at the top of the table. Five-time champion Van Gerwen has won nine of the last 10 matches between the pair, and looked to be heading for two points that would have tied him level with Van den Bergh.

There was nothing between the pair across the opening six legs before Van Gerwen took advantage of Anderson’s first dip to lead 5-3, 18-dart legs enough to do the damage on both occasions.

But when the Dutchman missed a dart at double six, Anderson closed within one and then levelled the match with an ice-cool 78 finish.

In keeping with the see-saw nature, the pair shared the last two legs, Van Gerwen the first to secure a point before Anderson cleaned up 68 to end an entertaining contest all square.

Dimitri Van den Bergh maintained his position at the top of the table after coming out in top against Rob Cross – a result that leaves Voltage in danger of a second successive first stage elimination. The pair traded breaks early on, before pushing their average up to 100 as they followed with holds of throw before Van den Bergh found what is fast becoming a trademark move through the gears.

Four successive legs took him to the brink of victory as a 14-darter got the ball rolling, a superb 124 finish moved him into a 5-2 lead and a clinical two-dart 89 secured a point.

Another win at the Premier League! ? 10points in 7matches. This is a dream debut for me! ?? #getinn #premierleaguedarts #thedreammaker

Cross has produced plenty of impressive moments during the opening seven matches, and he threatened a comeback when he took out the next two legs to draw within a couple of legs of The Dreammaker.

But Van den Bergh is a title contender every time he toes the oche and he claimed the solitary leg he needed for another victory, and a third successive defeat for 2019 runner-up Cross. Honours even as Ferret denies Asp

Nathan Aspinall and Jonny Clayton shared the points in a hugely entertaining 6-6 draw that keeps both men within touching distance of the league leaders. Aspinall was fastest out of the traps, racing into a 2-0 lead and maintaining that advantage despite a sizzling 121 finish from Clayton.

The Asp bettered that when he took out 124 to re-establish his two-leg lead but like all of the debutants, Clayton has risen to almost every challenge and the Ferret fought his way back into the contest with back-to-back 13-dart legs to level a high-quality encounter at 4-4.

After swapping the next two legs, Aspinall was the first to secure a point when he pinned double 16 and when Clayton missed a dart for a 104 finish, The Asp had three darts to secure victory.

However, all three failed to hit the double top target and Clayton stepped in for a share of the spoils. James Wade and Peter Wright came into the contest looking for a priceless victory that would pull them away from the battle to be eliminated and it was Wade who triumphed in a see-saw contest.

The Machine, Premier League champion in 2009, started in style, pinning a 120 finish to take the opening leg on his way to a 3-1 early advantage, but Snakebite – throwing with yet another new set of darts – hit back in clinical fashion. A stunning three-leg burst took him from trailing by one into a 4-3 lead that was only halted by Wade matching the feat. The Machine claimed three successive legs of his own – sealing a point with a superb 13-dart leg.

Wade turned it into three when he cleaned up 96 in two darts to boost his top-four hopes, while defeat leaves Wright a point clear of the relegation places.

Don’t miss an arrow as Premier League Darts continues on Tuesday from 7pm on Sky Sports Action – and stick with us through the week for updates, interviews and reaction from start of this year’s competition