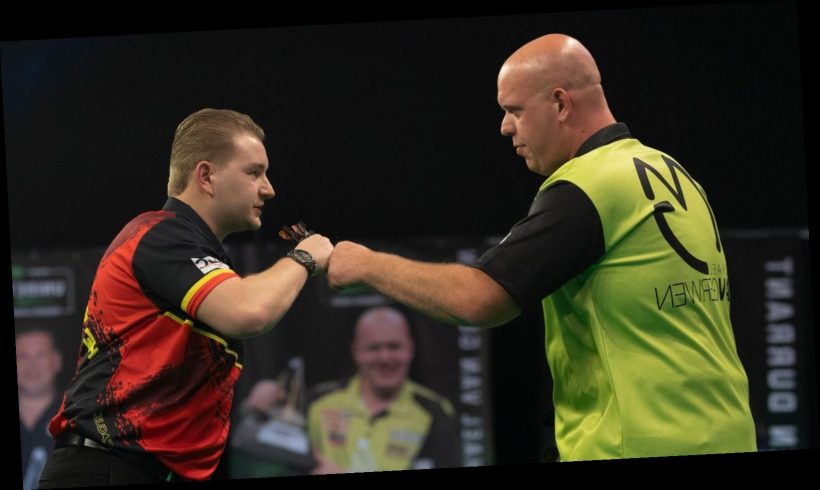 Michael van Gerwen needed a last-gasp 101 finish to earn a share of the points against Dimitri Van den Bergh on an opening night of the Premier League that saw four of the five matches end in a draw.

Van Gerwen has been the sport’s dominant force in the Premier League, winning the title in 2013 and then for four consecutive years between 2016 and last year, when he missed out on the top four for the first time.

The Dutchman, who has also been knocked off the world No 1 ranking after Gerwyn Price’s world title win, has had a habit of finding ways to lose of late, but the format gave him the chance to share the honours and he did so in style.

World champion Price was dramatically ruled out on Monday morning after testing positive for Covid-19, and James Wade – who had been in Milton Keynes on stand-by – stepped in to face Gary Anderson and was only denied victory by the Scot’s 156 in the final leg that secured a point.

Only Nathan Aspinall was victorious on the first of five consecutive nights of action to start the tournament, with debutants Jonny Clayton and Jose De Sousa also earning points against Peter Wright and Rob Cross respectively.

Dimitri Van den Bergh drew on his only previous Premier League appearance, and it needed a nerveless 101 finish from five-time Premier League champion Michael van Gerwen to deny the Belgian going one better on his full-time debut.

As a contender two year ago, Van den Bergh drew 6-6 with James Wade and it was the same scoreline in Milton Keynes in an evenly-contested affair that see-sawed in both directions.

After Van Gerwen had taken the first leg, The Dreammaker, now a major champion after winning the World Matchplay in this venue, produced a sensational 164 for the first break of throw of the match and a 2-1 lead.

The pair continued to trade legs and were locked at 5-5 when Van den Bergh missed his first chance to seal a point. But when MVG missed two of his own, the Belgian secured a share of the spoils.

But Van Gerwen, who missed the play-offs for the first time last year, dug deep for a 12-dart break of throw and a point on opening night with his ice-cool 101.

James Wade and Gary Anderson have three Premier League titles and two runners-up finishes between them, so it was no surprise the pair served up a cracker on opening night. 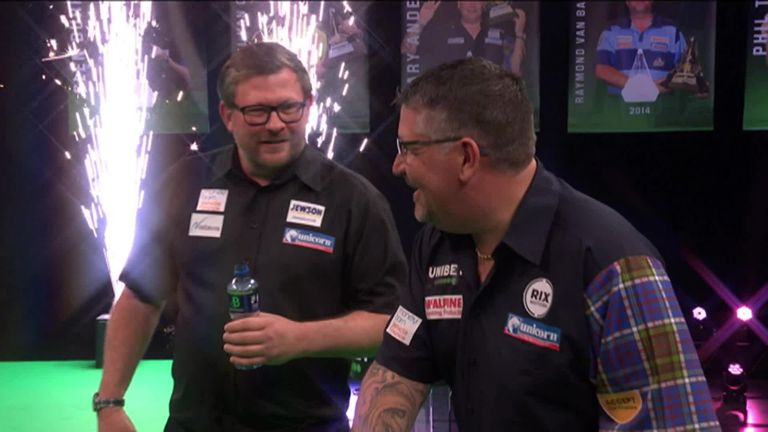 Wade, who was a late call-up to the field following Gerwyn Price’s positive Covid-19 test, looked to have taken advantage of two-time champion Anderson’s errant doubling but the Scot came good when he needed it to seal a point with a brilliant 156 finish.

Efficient finishing from The Machine, the 2009 champion, had given him the first significant advantage at 4-2 and while Anderson was able to half the deficit the Scot wasted two darts to level the contest and Wade pounced for a 5-3 lead.

Anderson once again closed to within one as he produced a brilliant 13-darter before levelling the match despite more missed darts at doubles. When Anderson missed tops to secure a point, Wade was ruthless to mop up 96 in two darts but Anderson was not to be denied – and his last-leg heroics earned him a point, putting 14 missed darts at doubles behind him to pin double 18 with Wade waiting on 80.

Honours even in Snakebite-Clayton thriller

Peter Wright and Jonny Clayton underlined their status as arguably the two most in-form players in the field with a high-class draw to ensure Clayton ended his Premier League debut with a point and a 105 average. 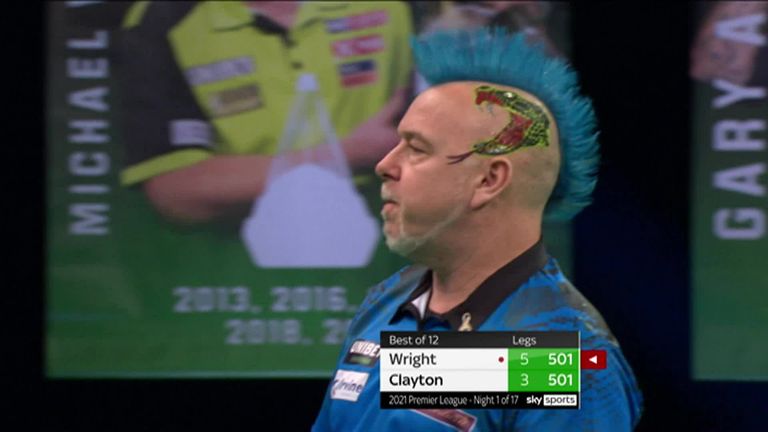 The Ferret was a contender in last year’s Premier League, but suffered a 7-1 defeat to Michael Smith in Cardiff, however, he has thrived of late, winning the World Cup with Gerwyn Price and capturing his maiden televised individual title at The Masters.

He started well with a 15-dart break, but Snakebite – who won the last title at the most recent Super Series – hit back with an 11-dart leg of his own. Clinical combination finishing and relentless scoring ensured the pair stayed level before Wright struck for a pair of superb big finishes that looked to have broken Clayton’s resistance. A finish of 106 was followed by 138 to put the Scot 5-3 in front but Clayton took out 129 himself to stay within touching distance at 5-4.

After watching the Ferret level, Wright went 6-5 ahead to ensure a point and maintain a 100 per cent record on his finishing – but Clayton was not to be denied as a classy 78 ensured it was honours even.

Jonny Clayton has arrived in the Premier League! 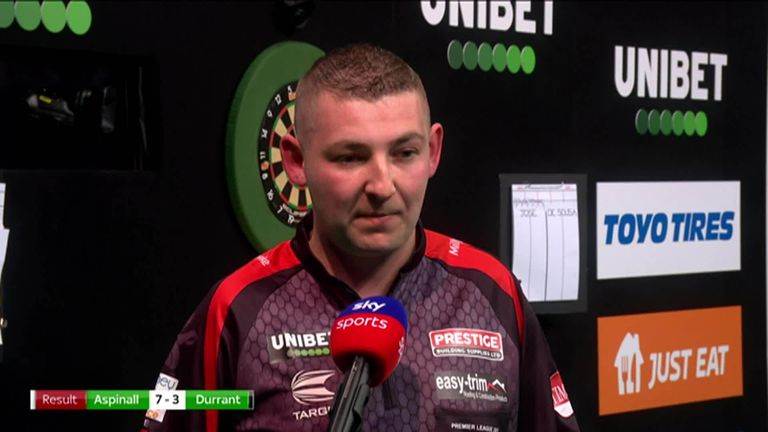 Duzza claimed his first televised PDC title when he beat Aspinall 11-8 at the Ricoh Arena in October, but he has lost his way since then, struggling for form and confidence. He was up against it from the off as The Asp put his own struggles behind him with a fast start that included a brilliant 124 finish.

Back-to-back 17 dart legs took Aspinall into a 4-1 lead without breaking sweat before Duzza offered a glimpse of his best with a 12-dart leg. But that was as good as it got for the defending champion as Aspinall coasted home, winning three of the last four legs for a comprehensive victory.

A classy 92 via a pair of double 18s sealed the point for Aspinall, which he turned into two when he cleaned up 42 to get off to the perfect start.

Grand Slam of Darts champion Jose De Sousa picked up a point on his Premier League debut, after Rob Cross fought back to draw 6-6 with the first Portuguese player to play in the competition. With very little between the pair throughout it was no surprise that the match went the distance as a hard-fought contest started with the pair splitting the first eight legs, with just a solitary break of throw from each player.

De Sousa looked to make a decisive move as they edged into the closing stages. Having broken for a 5-4 lead, the Special One took out double two for the first two-leg lead of the contest and with it a guaranteed point on his debut.

However, Cross hit back with a two-leg burst of his own to ensure it was honours even – sealing the point with a brilliant 88 finish on the bullseye.

Don’t miss an arrow thrown with Sky Sports as Premier League Darts continues on Tuesday at 7pm on Sky Sports Action – and stick with us through the week for updates, interviews and reaction from start of this year’s competition