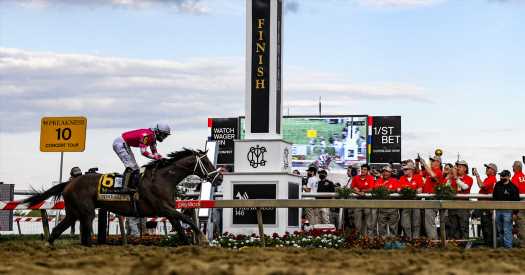 BALTIMORE — Medina Spirit was running against more than the nine rivals on the track on Saturday. He was taking on an ex-president who had called him “a junkie,” late night comics and a public skeptical of his natural talent after he won the Kentucky Derby two weeks ago but failed a drug test afterward.

For a mile and three-sixteenths, Medina Spirit chugged around Pimlico Race Course, leading for much of it. But so much hung in the balance: the colt’s reputation; another record for his absent trainer, Bob Baffert; and the credibility of an old and battered sport that very much needs to change.

In the end, that load was too heavy for Medina Spirit.

Instead, a long shot colt named Rombauer rolled down the middle of the lane like a riverboat let loose on a downstream current of the Mississippi River and won by three and a half lengths. Medina Spirit faded to third, and Midnight Bourbon finished second.

Many believe the right horse won. Thoroughbred racing insiders, especially, were rooting for anyone but Medina Spirit, after the colt’s failed drug test.

That did not diminish the feeling of achievement that Rombauer’s trainer, Michael McCarthy, or his jockey, Flavien Prat, felt in the winner’s circle. McCarthy, a former assistant of the trainer Todd Pletcher, fought back tears as he absorbed the enormity of his first victory in a Triple Crown race.

“It just goes to show you that small players in the game can be successful as well,” said McCarthy, who operates a modest stable based in California. “It was like an out-of-body experience.” 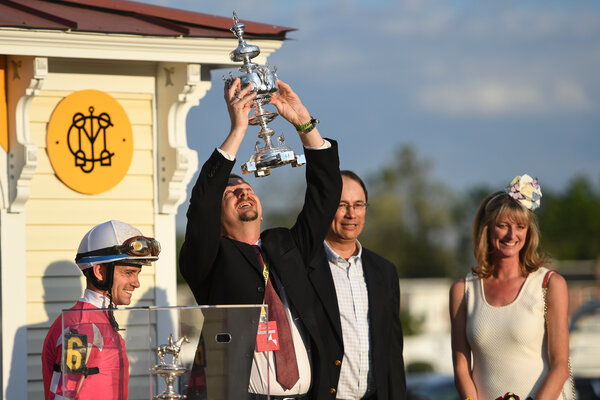 For Prat, a Frenchman, it was a delayed star turn.

He won the 2019 Kentucky Derby — sort of. Maximum Security crossed the finish line ahead of him at Churchill Downs that first Saturday of May. But Maximum Security was disqualified for interference on the turn for home, and Prat’s colt, Country House, was elevated to first place.

“It does feel different,” Prat said. “I realize about how important it is.”

Rombauer’s victory quieted the circus that has surrounded Medina Spirit’s positive test for the drug betamethasone, a corticosteroid injected into joints to reduce pain and swelling, and moved it to New York and the Belmont Stakes next month.

Churchill Downs officials made it clear that if a second sample confirmed the presence of the drug, the colt would be disqualified and Mandaloun, the runner-up, would be declared the winner.

The results of that sample are not known yet, and Baffert had the right to send the second sample to a lab of his choice. That result is expected to be known in the coming weeks.

John Velazquez, who rode Medina Spirit, came to the colt’s defense after the Preakness. He knows his fourth Derby triumph is in jeopardy. At 49, Velazquez is tied for Derby wins with Bill Shoemaker and is one behind Eddie Arcaro and Bill Hartack. Until he isn’t.

“He didn’t stop,” Velazquez said of Medina Spirit. “He just got beat.”

And where was Baffert?

On May 9, after announcing the failed drug test, Baffert said there was no way he or his barn could have been responsible for giving Medina Spirit the steroid, and he vowed to be transparent. He gave a series of television and radio interviews, floating various theories about how the colt had tested positive for betamethasone.

On Monday, Baffert criticized Churchill Downs’s suspension of him as “harsh,” blamed “cancel culture” for the controversy and said racing officials were out to get him.

On Tuesday, however, he acknowledged treating Medina Spirit for a rash by using an antifungal ointment called Otomax, which contained betamethasone, every day for several weeks.

Last fall, after a run of high-profile drug violations — five in 13 months and 30 overall — Baffert said he hired Dr. Michael Hore, a veterinarian at the Hagyard Equine Medical Institute in Lexington, Ky., to ensure rule compliance and the well-being of his horses. Within the past week, however, Baffert’s lawyer said that the veterinarian was, in fact, never hired.

So Baffert stayed in California and avoided questions about who prescribed the drug and how long it was applied to Medina Spirit. Photos show the drug is clearly labeled on the ointment’s packaging. Veterinarians have said it is used mostly to clear up ear infections on dogs and other small animals.

Baffert turned down several requests from The New York Times to make public his colt’s records.

Instead, Medina was treated like a pin cushion this past week.

Only in a sport with no central authority, and haphazardly enforced rules, could Baffert and the owners of Pimlico come up with an agreement to allow expanded drug testing as a way of allowing the colt to run this weekend. Three rounds of blood and urine were taken from Medina Spirit for tests, which he passed.

While Baffert stayed in seclusion in California, an emotional McCarthy cut his news conference short with a phrase that is probably now familiar to casual horse racing fans everywhere.

“I’m off to the test barn,” McCarthy said, referring to the place urine and blood samples are taken.

Anyone who loves horse racing is holding their breath that those tests come back clean.