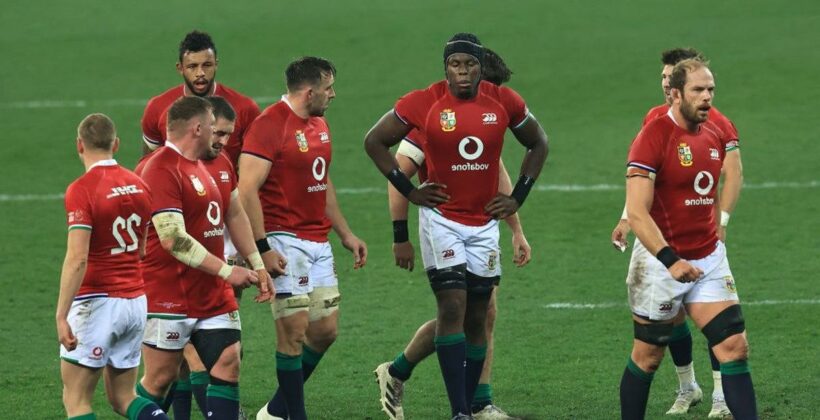 Siya Kolisi smiled, and a nation smiled with him. These have been tough months for South Africa, through crises coronavirus and civil, and a British and Irish Lions tour enjoyed, or endured, behind closed doors.

As the champagne corks popped and the fireworks flew, at last an uplifting image: the Springboks’ first black captain, trophy in hand, adding victory over the Lions to World Cup triumph.

In the end, the margins were predictably fine. One moment of magnificence from the flamenco feet of Cheslin Kolbe; one moment of calm and Morné Steyn’s more considered right boot to seal it. At 37, the Springboks’ hero of a previous feature improbably cast again to play a leading role in breaking British and Irish hearts in the sequel.

“In this environment, you can’t motivate people any more with rugby, we all know what to do,” said Kolisi after securing back-to-back South Africa series victories over the Lions.

“But when you speak to the person you are playing for and think about broader things, like what our country is going through, what it is going to do for the people, that’s what drives you.

“It was not only for us, our families and the team, but for the country as well. I just hope we have given people something to smile about.”

For the Lions there can be only regrets. They were the better side in the decider, particularly in the first half, and on another occasion may have pressed into an unassailable advantage.

They will have four years to agonise and scrutinise.

For Liam Williams the decision to dummy with Josh Adams in space beyond him will be an uncomfortable mental recurrence. The wide shot was particularly incriminating; Adams would have sauntered over. Likewise had Tom Curry’s over-eagerness to guide Ken Owens to a second maul score not translated to an off-ball NFL offensive lineman block metres from the line, the game may have taken on a very different shape.

More broadly, it may be questioned why it took until the injury-enforced arrival of Finn Russell for the Lions to even try and play wider. The Scot is a fabulous attacking fulcrum, as he showed in 60 excellent minutes off of the bench, but so can be Dan Biggar. With Russell in harness, playing creatively and flat to the line, the Lions were able to genuinely challenge the outside blitz, the arrival of the fly-half seeming to imbue a sense of adventure.

The indications are that this was the intention with Biggar in from the start, but there will be those who question whether a fit Russell might have made the difference over three Tests.

The record will show that a side formed of four strong home nations and drawing from a deep vein of attacking talent ultimately mustered only two pushover tries across 240 Test match minutes. This South African defence possesses an intensity almost unlike any we have ever seen but it was a grand disappointment, as much for the series, that there was not more fizz in attack.

“At the highest level, you get one or two chances and a mistake is really costly,” said defeated head coach Warren Gatland. “I can’t complain about our attitude and the way we went about it. We turned down a couple of three-point opportunities to go to the corner to try to build a bit of a lead.

“I’m disappointed but really proud of the effort the boys put in. We were bold, we went out to play some rugby. We missed a few chances and they get a lucky bounce and score against the run of play. It was a proper Test match – a couple of calls didn’t go our way.

On to the next one. This is a tour that, for many reasons, will not swiftly be forgotten and credit must go to both sets of players for sacrificing much to take part. That said, the off-field posturing and pontificating has been damaging for the Lions brand; so too the reluctance for either side to play with greater freedom. Hidden again almost entirely on pay-to-view TV and played behind closed doors, it has not been a tour to either capture new fans or enliven those already able to watch.

Yet however flawed this series has been, the Lions still hold special weight. There are many great questions about the touring side’s place in the modern rugby landscape, but for its ability to captivate and conjure consternation and contention at every stage, there is little like it.

“I got a bit emotional after the game,” confessed Alun Wyn Jones, beaten skipper. “I’m never going to put this jersey on again. I am never going to have that chance again.

“I think in its basic concept [the Lions] is something quite special, something that ignites the imagination in children and adults. It is a very special thing and if rugby were to lose it, it would be a travesty.”

Gatland expressed post-match his wish that the tour schedule for Australia in 2025 is sorted swiftly and appropriately. This will enable whoever is coaching the Lions – and, unlike four years ago, Gatland did not categorically rule out his own potential candidacy – to have greater time with their players to gel after the player release squabbles that defined the opening debates of this strange summer.

While Gatland has left for New Zealand, many of the players have now returned to Jersey to fulfil less stringent quarantine requirements before returning to their homelands. Some have seldom stopped since the Premiership restarted in August last year. They are due ten weeks off; that period will butt against the autumn internationals and so some clubs may not have use of their players this side of Christmas. Rugby’s longest season and this summer of our discontent are finally at a close.