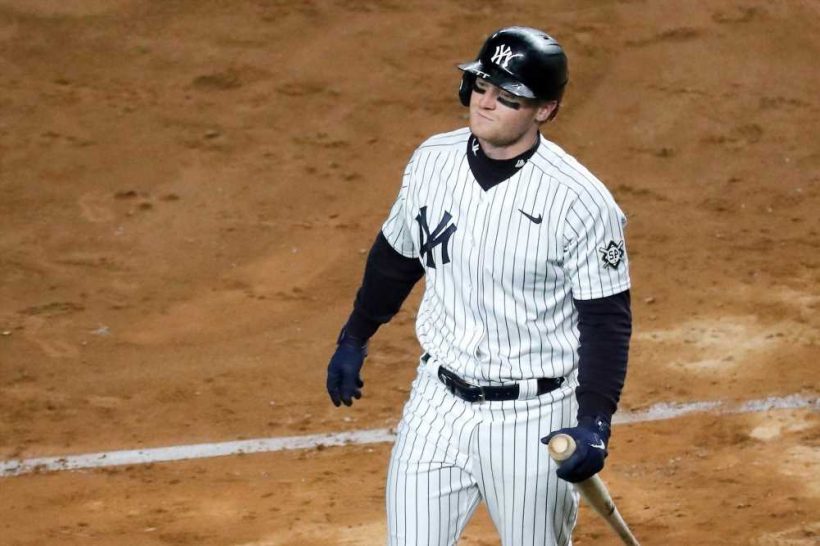 Think about a preseason checklist with the Yankees. Where were the concerns? Were there too many righty hitters? Was there enough starting pitching? How about overall athleticism?

The outfield was not in the discussion. If anything, with the late signings of Brett Gardner and Jay Bruce and the lingering presence of Mike Tauchman, Miguel Andujar and maybe even Estevan Florial, the Yankees seemed covered behind the starting trio of Clint Frazier, Aaron Hicks and Aaron Judge. Remember, just a month ago, it took Luke Voit’s decision to have knee surgery late in spring training to even shoehorn Bruce on the roster.

Yet in this first unsatisfactory month for the Yankees, the depth and the performance of the outfield have both waned.

Bruce, feeling no longer qualified to succeed at a major league level, retired. On Tuesday, Tauchman was traded to the Giants, Judge was pulled late from a game against the Orioles (with manager Aaron Boone hiding behind vagaries about lower-body soreness), and Frazier and Hicks went hitless in eight combined at-bats. Frazier and Hicks have been two of the worst hitters in the majors — and Gardner has not been much better when he plays.

For the second time this season, Boone held Judge out of the lineup (it was for three days and two games the first time) with, yeah, fill in the blank. The Yankees manager would more comfortably provide his social security number to an on-line, anonymous Nigerian prince seeking a financial favor than publicly detail what ails Judge.

Boone described Judge as being banged up in multiple lower-body realms — the same Judge-itis of earlier April. Boone said he saw no reason to be more specific than that about not playing one of the few players hitting in a flaccid lineup. Boone said he expected Judge to start Thursday’s matinee finale in Baltimore.

But it is clear that when they have long stretches of games — and they are in the midst of playing 13 straight days — Boone and the Yankees are going to play the preservation game with their oft-injured slugger. Judge is a dichotomy — both powerful and fragile. His absences in the past were usually covered by others stepping up within a long lineup. The Yankees, though, began Wednesday averaging 3 ½ runs per game, the second fewest in the AL.

Both Boone and general manager Brian Cashman said they are not at the point yet to cut into the playing time of Frazier, who went into Wednesday hitting .132, homer-less and in the midst of a 2-for-41 slump, or Hicks, who was at .153 and mired in a 4-for-41 skid. Boone, naturally, went to his favorite optimistic script that he senses the players are about to break out and they can’t be as good as the Yankees expect without that duo performing well. He said the same before stripping Sanchez of his starting job both in 2020 and this year.

So it is about actions and, for example, Hicks no longer is the No. 3 hitter, batting sixth or seventh in his last seven starts.

But it also is about the options. And the alternatives are not as pleasant as first thought. Tauchman played hardly at all this season, never hinted that he could recapture the best of his 2019 form and was traded for Wandy Peralta, who provides bullpen depth with a minor league option. That raises the importance that Gardner, who will turn 38 in August, is not done. He was at .194 and in his own 1-for-19 plummet.

Miguel Andujar just got to the alternate site this week after a wrist ailment, but who knows when he will be ready, if he can handle the outfield or if he is anything like the revelation who nearly won the 2018 AL Rookie of the Year? Giancarlo Stanton is from the Judge powerful/fragile department. He has started 85 games in the outfield as a Yankee, none since 2019. In spring, Boone threw open that Stanton would be an outfield option at junctures. He was not as definitive on that Wednesday. Cashman said it was his manager’s call, but he thought it was probably best to protect Stanton’s bat by not exposing him to the field.

Cashman said the team is not having conversations about mixing up the outfield — Frazier, making the least of the starting job he craved, does still have a minor league option.

Come July, finding a veteran outfield bat is normally among the easier jobs in the trade market. But that is a long way off. If the offense is going to meet expectations, Judge needs to stay healthy and Frazier, Hicks and Gardner need revivals.