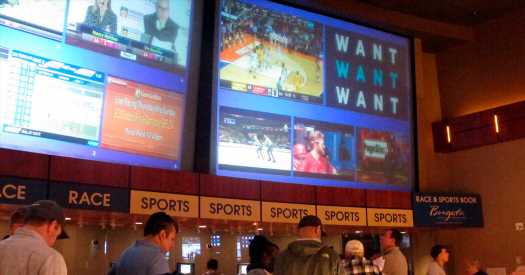 For a fan, especially one who likes to gamble, there’s nothing quite like the atmosphere of a sports book during an N.C.A.A. basketball tournament. A packed house, multiple games on multiple televisions, throngs of fans enjoying a victory or tearing tickets in frustration at a defeat.

But last year, sports books across the country fell silent as the coronavirus shutdowns began at one of the worst possible times, only days before the men’s tournament was to begin.

As the event returns this week, sports books are optimistic that this year’s event will bring back the crowds, even as ongoing pandemic restrictions mean it won’t be entirely business as usual.

“The Super Bowl and the first week of March Madness are above everything else by a country mile,” said Nick Bogdanovich, the head oddsmaker at Caesars Palace in Las Vegas. “The first four days are colossal. When a buzzer-beater hits, the place goes up like a nuclear bomb went off. Or when a game with a 16½-point spread is affected by a last shot.”

Since the last tournament in 2019, legal sports betting has expanded in the United States as more states have pounced on a 2018 Supreme Court ruling that allowed them to enter a gambling market that was once heavily restricted. According to the American Gaming Association, the lobbying arm of the commercial casino industry, 13 jurisdictions have opened sports books since the N.C.A.A. basketball tournaments were last staged. That has allowed as many as 65.4 million more Americans to wager legally.

Casino executives said that may only expand their pool of customers, especially since the crowd at sports books during the tournament always has been a bit different than the usual mix.

“Visitors are younger and here to have a good time,” Jay Kornegay, executive vice president for operations at the Westgate Race and Sports Book in Las Vegas, said of the March crowds. “We have to stock up on double bacon cheeseburgers and Corona. It’s a fact. We have to order extra bacon.”

The tournament is especially lucrative for books, even compared with the Super Bowl, because the betting is often much more spread out.

“The average bet for the Super Bowl is over $200,” Kornegay said. “In March Madness, it’s under $100, but there are a lot more games going on.” That makes the Super Bowl more risky for sports books, he said, because most of the action is on a single outcome — the winner of the game. With so many games going on during the basketball tournaments, the books’ exposure on any one game is reduced — which is often a boon for their bottom lines.

Until last year, when that bonanza unexpectedly and suddenly went away.

“Financially, it was just devastating,” Kornegay said. In Las Vegas, sports books were closed from mid-March until June, and casinos similarly struggled with other offerings like slot machines, table games and amenities like hotel rooms and restaurants.

Some betting shifted to mobile wagering, which more and more brick-and-mortar outlets are offering, as people eager for action searched far and wide for new betting options. “We’ve seen record numbers on the mobile app over the last seven or eight months,” Kornegay said. “It’s now about 70 percent of our total handle.”

This year, restrictions in Las Vegas and elsewhere will mean sports books will be limited to between 33 percent and 50 percent of their normal capacity.

At Beau Rivage in Biloxi, Miss., one of many casinos around the country that has added sports betting over the past few years, there will be limits on seating capacity and mandates on spacing of tables. Still, officials there and at other sports books around the country expect basketball fans will return.

“We will definitely fill 100 percent of what we’re allowed to,” said Will Hall, the Beau Rivage race and sports book manager. Other casinos are predicting sellouts, too.

Changes to the schedule this year, though, could have a ripple effect on business. The opening four days will all be shifted a day forward. Holding the first round on Friday and Saturday may not make a huge difference, several bookmakers said, but holding Round 2 on Sunday and Monday will have a negative impact.

The round of 16 games, normally played on a Thursday and Friday, will be held on March 27 and 28, a Saturday and Sunday, setting bookmakers up for big days. But the regional finals that send teams to the Final Four, usually a weekend quartet of games but now set for a Monday and Tuesday, are “probably going to be the worst ever,” Kornegay said.

Still, the tournament’s return in any form is welcome news — for fans, for bookmakers, and, apparently, for the bacon business.