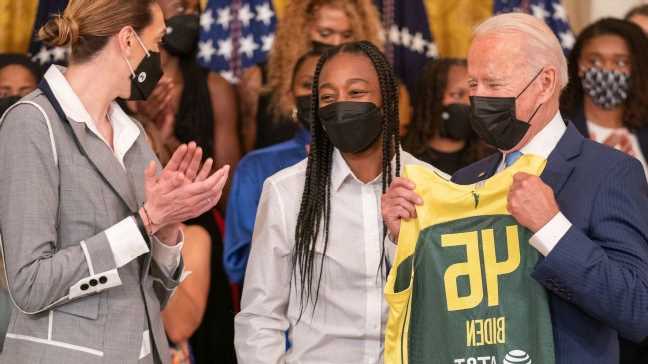 President Joe Biden welcomed the Seattle Storm to the White House on Monday, applauding them for being a “force for change.”

Biden applauded the team that took home the WNBA title last season while being part of the “bubble” in Florida, concluding a season that was played amid the COVID-19 pandemic.

“And what makes this team remarkable is they don’t just win games. They change lives. Encouraging people to get vaccinated so we can beat this pandemic. Speaking out of standing up for racial justice and voting rights. Supporting education and mentorship programs for young people. And fighting to protect trans youth from an epidemic of violence and discrimination,” Biden said before accepting his custom No. 46 jersey from the Storm. “That’s what winners do: They shine the light, they lift people up, they’re a force for change.”

No NBA or WNBA team has visited the White House since the Cleveland Cavaliers did in 2016 when Barack Obama was in office. The last time a WNBA team was at the White House was the Minnesota Lynx in 2016. The Lynx were not invited in 2017 by former president Donald Trump.

Storm star point guard Sue Bird said in 2018 that the team would not visit the White House either with Trump in office.

On Monday, Bird, who has been to the White House before with the UConn Huskies and the Storm, said it felt “good” to be back at 1600 Pennsylvania Avenue.

“As people who are in women’s sports, it feels good to be back in this place and celebrated in this way,” Bird said.

Biden also congratulated Bird, who was part of a Team USA squad that won gold at the Olympics. Teammates Breanna Stewart and Jewell Loyd also won gold in Tokyo.

In his short speech, Biden, who called for equal pay in America between men and women, said the WNBA has been “changing what’s possible for millions of women and girls.”

“As a nation, we need to support women’s sports, not just during the Olympics, but during the year, during every season and showing up in person and watching on TV,” Biden said. “More sponsorships and programming to help grow the business of women’s sports. These women are amazing athletes. They are the best in the world. We honor them by showing up for them.”